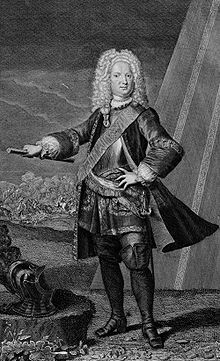 Johann Adolf II von Sachsen-Weißenfels (born September 4, 1685 in Weißenfels , † May 16, 1746 in Leipzig ) was the fifth and last Duke of the Electoral Saxon secondary school of Saxony-Weißenfels and Prince of Saxony-Querfurt and came from a sideline of the Albertine Wettins .

Johann Adolf II began his grand tour to Holland in mid-December 1699 incognito with the former squire Wolf Bernhard von Werther and the later court and judicial councilor and member of the secret council Johann George Menii . After a good month they reached Amsterdam . Before going on to France, the company stopped in The Hague to consolidate the French language and the chivalric retreats “with untiring zeal”. When describing the stay in The Hague, particular emphasis was placed on the fact that Johann Adolf II gained the acquaintance and respect of imperial, royal, Polish, French, Swedish and Danish ambassadors and other people of high rank. He achieved the improvement of languages ​​and customs through constant visits and meetings with the aforementioned. Johann Adolf and his companions then undertook additional stresses of several weeks in order to meet the English King Wilhelm III. to reach. When the audience finally took place at the hunting and pleasure palace in Loo , Johann Adolf was also able to meet Friedrich, Hereditary Prince of Hesse-Kassel , who later became King of Sweden, many English lords and royal ministers. After a few days he finally traveled on to Paris , where he stayed for a long time and where his lessons in horse riding, fencing, dancing and learning the French language culminated. In addition, through the Duchess of Orleans , he was able to present himself to the French King Louis XIV as well as the Dauphin and his sons, the Duke of Burgundy and that of Berry , who later adopted him in the presence of the court at Fontainebleau Castle .

Duke Johann Adolf II. Von Sachsen-Weißenfels with an allonge wig and in armor with an ermine coat as a sign of princely dignity

As the Duke's youngest son, he had little chance of ascending the throne, so he was prepared for a military career at an early stage.

Already at the age of 17 he entered the service of Hesse-Kassel and fought against France in the War of the Spanish Succession , where he distinguished himself at Höchstädt , Turin and Malplaquet .

In 1711 his cousin August the Strong appointed him to Saxon-Polish services. First with the rank of major general, he successfully participated in the Battle of Stralsund in the Great Northern War against the Swedes and was appointed lieutenant general in 1714. Later promoted to general commander of the royal Guard du Corps , he commanded a 6,000-strong auxiliary corps in 1716, the Emperor Charles VI. was sent to Hungary to help in the Sixth Turkish War .

Appointed General of the Electoral Saxon Cavalry in 1723 , he then led the Saxon troops to Poland in the War of the Polish Succession at the end of October 1733 and led the siege of Danzig together with Burkhard Christoph von Münnich . The Saxon army under Johann Adolf, promoted to electoral Saxon and royal Polish field marshal on August 3, 1735, stayed mainly in southern Poland in order to secure the coronation of the Saxon elector Friedrich August II. As king of Poland. Saxon troops were under Johann Adolf's command in Poland until 1736, when they were finally able to defeat the supporters of the opposing candidate Stanisław I. Leszczyński .

On October 7, 1736 he was on the hunting castle Hubertusburg the military-St. Heinrichs Order , which was donated by the king that day. At other awards he received the Royal English Blue Garter Order and the Royal Polish Great White Eagle Order .

Government in the Weißenfels principality

Duke Johann Adolf II. Von Sachsen-Weißenfels with an allonge wig and in armor with an ermine coat as a sign of princely dignity

After his two brothers, the ruling dukes Johann Georg and Christian, both died after a relatively short reign, Johann Adolf ascended the throne of the principality on June 28, 1736. One of his first acts was the reorganization of the finances of the dwarf state, which had been shattered by his predecessors. After the death of his cousin Georg Albrechts , the County of Barby also fell back to the Weißenfels line in 1739.

Continuation of the military career

Later he was also involved in the military. In 1741 he was the commander of the Saxon Army in the First Silesian War and after Prussian troops had crossed the Saxon border in the Second Silesian War in 1745, Saxony and Austria agreed to jointly take action against Prussia . Silesia was to be cut off from Prussia in the north by Saxon troops, while Austrian troops would advance in the south. Johann Adolf presented plans for such a campaign in September 1745, but two weeks later he withdrew from them in a memorandum. Thereupon he had to resign as Commander-in-Chief on December 12 of the same year, i.e. immediately before the Battle of Kesselsdorf , and was replaced by Count Rutowski . Further reasons for his resignation were probably his health, which was already bad at the time, and the economic means for the army that Prime Minister Heinrich von Brühl denied him.

The elector already deposed Rutowski in November, whose position as commander-in-chief was taken back by Johann Adolf from December 1, 1745. In addition, he was appointed head of the Saxon government during the absence of the Elector and Minister Heinrich von Brühl. Although troops from the allied Austria and imperial contingents were available, he gave a resistance no chance, whereupon he was recalled as Commander-in-Chief on December 12th.

Even before the Battle of Kesselsdorf, the Secret Council was working on a deed of surrender on December 15, 1745 in Dresden under Johann Adolf's direction. In the afternoon he went to the battlefield and after the battle with Rutowski went to Bohemia. A little later he suffered a heart attack and died on May 16, 1746 while visiting the Leipzig trade fair . He was buried in a pewter coffin in the castle church of Neu-Augustusburg . Since the body had to be embalmed before its long transport to Weißenfels, the removed entrails were buried separately in an urn in the castle church. The design for his coffin comes from the Weißenfels court builder Johann Christoph Schütze , who had already led the renovation work at Dahme Castle for the then Prince Johann Adolf from April to September 1721 .

Since none of Johann Adolf's children reached adulthood, the Sachsen-Weißenfels line died out with his death and the principality fell back to Electoral Saxony as the last of the three secondary generations of the Fraternal Friendship Main Settlement .

Johann Georg Adolf, last Hereditary Prince of Saxony-Weißenfels - with his early death in 1740, the House of Weißenfels lost its only living male heir

His first marriage was on May 9, 1721 in Eisenach with Johannetta Antoinetta Juliana von Sachsen-Eisenach , the daughter of Johann Wilhelm, Duke of Sachsen-Eisenach from his marriage to Christine Juliane von Baden-Durlach .

With her he fathered an heir to the throne who died early:

After the death of his first wife on April 13, 1726, he married a second time on November 27, 1734 in Altenburg, Friederike von Sachsen-Gotha-Altenburg , the daughter of Friedrich II, Duke of Saxe-Gotha-Altenburg from his marriage to Magdalena Augusta from Anhalt-Zerbst .

He had the following children with his second wife, but all of them also died in childhood: