from Wikipedia, the free encyclopedia
Battle of Kesselsdorf
Part of: 2nd Silesian War 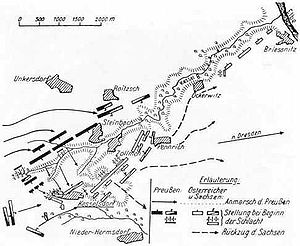 In the battle of Kesselsdorf on December 15, 1745, the Prussian army under Prince Leopold von Dessau defeated the allied troops of Saxony and Austria under the Electoral Saxon Field Marshal Friedrich August Graf Rutowski and thus decided the Second Silesian War in favor of Prussia .

Kesselsdorf , today part of the city of Wilsdruff , is located west of the Saxon capital Dresden . To protect them, the Austrians and Saxons had gathered 32,000 men here in December 1745 and positioned them south of the Zschoner Grund . The village formed the key to the position and was covered by 3 batteries with 34 guns . Leopold von Dessau, the "old man from Dessau", was determined to storm this position and attacked around noon.

The attack was repulsed twice with terrible losses to the Prussian army . However, since the troops from the Electorate of Saxony and the imperial contingent pursued the retreating Prussian battalions to their own batteries, they had to cease fire. During the pursuit, the position of the allies was dissolved, whereby the Prussians succeeded - after their cavalry had blown up the enemy - to penetrate Kesselsdorf with the fleeing and to conquer the batteries.

At the same time, the son of the Prussian commander-in-chief, Prince Moritz von Anhalt-Dessau , had bypassed and thrown back the right wing of the enemy at Pennrich with his troops , so that the Saxons began a disorderly retreat. A victim of the battle was the Saxon colonel and commander of a dragoon regiment, Christoph Ernst von Reitzenstein (1694–1746).

The battle of Kesselsdorf was the last victory of the old Dessauer and decided the war in favor of Prussia. Dresden was handed over on December 17th, and King Frederick II moved into the city the next day .

“This is how the battle at Kesselsdorf (1745. December 15th) ended, one of the bloodiest in modern war history. Their gain cost the victor almost as much as their loss cost the conquered. The Brandenburger triumphed here over nature, over artillery and the bravery of his opponent. His heroic leader, Prince Leopold , who was everywhere in the midst of the violent fire, drove three shotgun bullets through the coat; the horse of his son, Prince Moritz, was wounded three times under the body and the right lap of his coat was shot through; but father and son were unharmed. "

On December 25th, Friedrich concluded with the emissaries of Empress Maria Theresa and King Augustus III. of Saxony-Poland, with his Minister Heinrich von Brühl to Prague had brought to safety, the Treaty of Dresden . The peace treaty, which took place at 11:30 a.m., is still reminiscent of the daily noon bells in the St. Katharinenkirche Kesselsdorf at this time. In addition, in 1788, in memory of this battle, the slow military march of the Kursächsische Leibgarde, called Der Kesselsdorfer , was created, but its origins are said to date back to 1742.