from Wikipedia, the free encyclopedia
Battle of Roucourt
Part of: War of the Austrian Succession 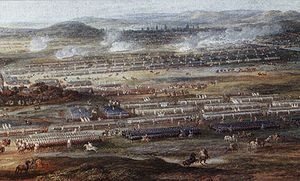 The Battle of Roucourt (en: Battle of Roucoux - fr: Bataille de Raucoux ) from 11. October 1746 between Austrians , Dutch , British and Hanoverians one hand and the French on the other hand took place during the Austrian Succession War in Rocourt, now a suburb of Liege instead and ended with a victory for the French. 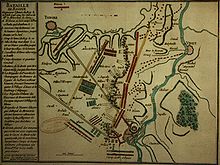 Plan of the battle, the French on the left, the pragmatic army on the right

After the pragmatic army had been weakened by the revolt of 1745 in Scotland and the withdrawal of most of the British troops, the French under Marshal Moritz von Sachsen continued their invasion of Flanders in 1746 , conquered Brussels , Antwerp , Namur and Charleroi and threatened with 60,000 men the pragmatic army of the states allied against France, which was under the command of Charles Alexander of Lorraine and comprised 40,000 men.

Charles of Lorraine positioned his army on the west bank of the Meuse . The left wing, formed from Dutch, was based on Liège, the center was formed by British and Hanoverian troops near the towns of Roucourt and Liers , the right wing was made up of the Austrian contingent, whose flank was secured by the River Jaar . Moritz von Sachsen let the Dutch attack on the left flank with an overwhelming force. The French succeeded in pushing past Liège into the rear of the pragmatic army. The Dutch put up strong resistance, but were forced to retreat behind the British and Hanoverians in the center. The British cavalry and two infantry battalions under General Sir John Ligonier covered the retreat of the pragmatic army across the Meuse and suffered considerable losses in some cases. Major General Otto Georg Veldtmann was among the fallen . In total, the pragmatic army lost about 4,000 dead and wounded, the French lost 3,518 men.

Immediately after the battle, the French captured Liège; There were no further military operations due to the advanced season.