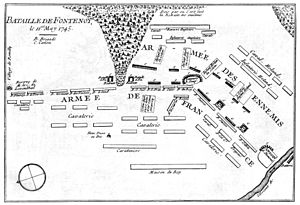 The Battle of Fontenoy on May 11, 1745 between the British , Hanoverians , Austrians and Dutch on the one hand and the French on the other hand took place near the Scheldt during the War of the Austrian Succession and ended with a victory for the French.

The 90,000-strong French army under the command of Marshal Moritz Graf von Sachsen , son of the Polish King August II , began the year 1745 with the siege of Tournai , an important fortress in southwest Flanders on the west bank of the Scheldt (now Belgium ) . The 48,500-strong “ pragmatic army ” of the allies under the command of the Duke of Cumberland then marched on Tournai to liberate the Dutch garrison and break up the siege ring.

Moritz von Sachsen then posted 49,000 men of his army in a strong defensive position in the hills east of the Scheldt between the villages of Antoing , Fontenoy and a bastion on the edge of a forest (Bois de Barry), which was called Redoute D'Eu . These positions formed a triangle, the tip of which was pointed at the attackers. The pragmatic army reached the French positions on May 10th and attacked them on the morning of the following day. The main burden of the struggle was on the British.

Although Brigadier General Richard Ingoldsby did not carry out the attack on the Redoute D'Eu ordered several times by Cumberland and the attackers were therefore exposed to strong flank fire, a double column of 16,000 infantrymen under Lieutenant General Sir John Ligonier pushed onto the plateau between Fontenoy and the Redoute D'Eu before, broke through the French lines and caused confusion and heavy losses among the French. The French saved the situation by firing artillery at the attackers head-on and attacking the flanks with infantry and cavalry.

French and British Guards clash at the Battle of Fontenoy. Painting by Edouard Detaille .

Only after fresh Irish regiments in French service (the Irish Brigade ) attacked the battered British, they withdrew in an orderly manner to their starting positions. Meanwhile, Scottish troops had tried several times in vain to take Fontenoy.

A later well-known participant in the battle was Jeffrey Amherst , then adjutant to Sir John Ligonier. The behavior of the British infantrymen during the battle earned the French great respect and went a long way towards earning them the reputation of being among the best foot soldiers in Europe.

The loss-making victory at Fontenoy enabled Moritz von Sachsen to take Tournai and other Flemish fortresses during the year . The Pragmatic Army was weakened during the year when Cumberland had to withdraw to Britain with most of the British regiments to meet the Scottish uprising of 1745.