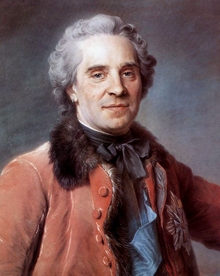 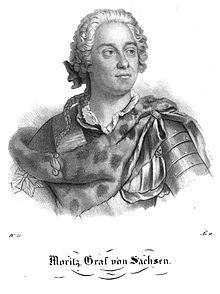 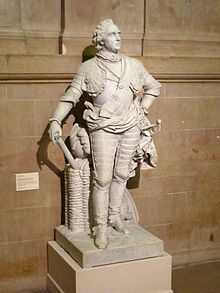 Moritz von Sachsen was an illegitimate son of Elector Friedrich August I of Saxony , called August the Strong (1670–1733), and Maria Aurora von Königsmarck (1662–1728).

Moritz received the title of Count of Saxony from his father during his imperial vicariate and soon the post of colonel in a cuirassier regiment. In 1706 he was already studying music and philosophy in Halle. Even then he was revered as a child prodigy. During the War of the Spanish Succession he fought with distinction in Flanders under Prince Eugene and the Duke of Marlborough in 1709 , and also distinguished himself in 1711 at Stralsund , during the Great Northern War , under the eyes of his father. Shortly afterwards his mother married him to the wealthy Countess Löben (1699–1747), but in 1721 the marriage was separated again.

In spite of his tendency towards debauchery, Moritz pursued the study of the art of war with great enthusiasm . In 1717 he took part in the fight against the Turks in Hungary under Prince Eugene of Savoy , in 1720 he entered French military services and was transferred to a German regiment (Régiment de Sparre infanterie) as provisional maréchal de camp (brigadier general) in 1722. In 1726, the Courland estates elected him duke at the instigation of the Duchess-widow Anna Ivanovna , daughter of Tsar Ivan Alexeevich . After his ostracism by the Polish Diet in November 1726, he was forced to flee after the invasion of a Russian army in August 1727. He continued to uphold his claims to the ducal office, but his efforts were unsuccessful, and in 1729 he returned to the French army.

Promotion in the service of France

After he had distinguished himself in the War of the Polish Succession on the Upper Rhine in 1733 , he was awarded the title of Lieutenant General on August 1, 1734 . In 1738 he raised his own army and marched with it towards Prague. In the War of the Austrian Succession he took Prague by storm on November 26, 1741 , conquered Eger and Elbogen and withdrew with Broglie to the Rhine, where he seized the lines of Lauterburg . On March 26, 1743 he was appointed Marshal of France , he set up his own regiment, the Volontaires de Saxe , which served him as house troops and bodyguards . Between January and March 1744 he commanded an expeditionary army gathered in Dunkirk , which was intended to restore the House of Stuart, but the planned landing in England was abandoned due to the dominance of the enemy fleet.

The following campaign in Flanders under the nominal command of Louis XV. was considered a masterpiece of the art of war, in that it forced the enemy, who was superior in number, to inactivity. On May 11, 1745 he fought against the English in the battle of Fontenoy and in February 1746 he conquered Brussels . After the Pragmatic Army was weakened after the withdrawal of British troops, the French continued their invasion of Dutch Flanders. After the rapid fall of the fortresses of Mons (July 10th) and Charleroi (August 2nd), Moritz besieged Namur , which was captured on September 19th. On October 11, 1746 he won a victory at Roucoux over the Austro-Dutch army under Prince Charles of Lorraine and was promoted to Maréchal général des camps et armées du roi on January 12, 1747 . After defeating the Duke of Cumberland near Lauffeld (July 2, 1747) and taking Bergen op Zoom (September 16, 1747), he was appointed Commander-in-Chief in the conquered Netherlands . The conquest of several important places, Maastricht fell in May 1748 , secured the French their previous successes.

After peace was concluded in Aachen on October 18, 1748 (→ Peace of Aachen (1748) ), the "maréchal de Saxe" retired to Chambord Castle, which was given to him by the king for life in 1745 . In the castle, he had some of the rooms that were no longer elegant, uncomfortable and very high by the standards of the 18th century, remodeled to suit the taste of his time and made it a meeting point for scholars, artists and philosophers. He also continued to make an important contribution to war science as a man of letters in the field of military theory, such as the "Rêveries" from 1732 (first published in 1756). In June 1749 he visited Friedrich II in Sanssouci .

He died on November 30, 1750 between six and seven o'clock in Chambord as a result of a fever that he contracted on November 12, and was buried in Strasbourg in the Protestant St. Thomas Church, where from 1765 to 1776 he was given a magnificent grave monument by Pigalle was built. 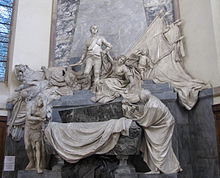 Tomb of Moritz von Sachsen: The marshal steps down the stairs to the coffin, which death opens. France tries to hold him back. Hercules mourns. The heraldic animals on the left represent the defeated empires Austria (eagle), Holland (lion) and England (leopard).

Moritz is well known for his love affair with the famous tragic actress Adrienne Lecouvreur . As a result, Moritz indirectly also became the protagonist of a play by Eugène Scribe and the opera Adriana Lecouvreur by Francesco Cilea . At the premiere in 1902, Moritz von Sachsen was portrayed by Enrico Caruso .

An illegitimate daughter, Maria-Aurora von Sachsen (1748-1821), married Dupin, comes from an affair between Moritz and Marie Rinteau de Verrières (1730–1775) . Thus he was the great-grandfather of the French writer George Sand (own Aurore Dupin).

Ideas about the art of war: Edited by [Zacharie de Pazzi de] Bonneville: Translated from French into German by G [eorg] R [udolph] Faesch. Weidmann, Leipzig and Frankfurt 1757. Digitized
Reveries or Memoires upon the Art of War by Field-Marshal Count Saxe: Illustrated with Copper-plates. To which are added some original letters, upon various military subjects. London 1757.