Prince Karl Alexander of Lorraine, 1736/37, as Knight of the Order of the Golden Fleece

Prince Karl Alexander of Lorraine, known as Karl, was born in Lunéville in December 1712 as the son of Duke Leopold and Elisabeth Charlotte d'Orléans . His mother was the daughter of Duke Philip I of Orléans and his wife Elisabeth Charlotte of the Palatinate . His older brother was Emperor Franz I Stephan , Maria Theresa's husband.

The prince, who was trained in engineering, foreign languages, physical exercise and political science and was accepted into the Order of the Golden Fleece on April 5, 1729 , remained in his home country until 1736. He has been the owner of an imperial infantry regiment since he was four years old. When his brother Franz Stephan married Maria Theresa in 1736 , he followed her to Vienna . In the Turkish War , 1737 to 1739, he was sergeant-general and was appointed Austrian field marshal on November 22, 1740, as which he was always on duty in the following years.

In the Silesian War

In the War of the Austrian Succession he lost the battle of Chotusitz in Bohemia against Frederick II of Prussia in 1742 , which shortly afterwards led to the preliminary peace of Breslau , which was advantageous for Prussia . After the Peace of Wroclaw he fought with luck against the Bavarians and the French. In the winter of 1742, the opposing army remained distributed between the Inn and the Isar and in the Upper Palatinate in winter quarters. Prince Karl gathered an army of around 70,000 and crossed the Inn on May 6, 1743 to break into Bavaria. On May 9th, he defeated the Bavarian General Minuzzi in the battle of Simbach and slowly pushed the enemy back to the Rhine .

In the spring of 1744 a strong French army broke into Flanders. Prince Karl then broke across the Rhine for relief and seized a large part of Alsace . There was no battle with the French because Prince Karl had to rush back to Bohemia in August after the Prussian troops had again intervened in the war. Advised by Field Marshal Traun as Adlatus , he drove the Prussians out of Bohemia through defensive measures by the end of the year. In the following year 1745 he was severely beaten by Friedrich II at Hohenfriedberg (June 4th) and Thrush (September 30th). The battle of Kesselsdorf was to become a military low point when his troops did not appear on the Walstatt in time. The Peace of Dresden (December 25, 1745) sealed the loss of the province of Silesia .

Governor General of the Netherlands 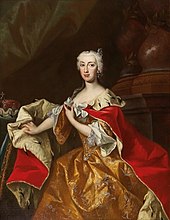 With papal dispensation from the canonical obstacle to third-degree kinship, he married Archduchess Maria Anna of Austria , Maria Theresa's younger sister, on January 7, 1744 in the Vienna Augustinian Church (Hofkirche) . On March 26, 1744, he entered Brussels as Governor General of the Austrian Netherlands, where his wife died on December 16, 1744. He remained Governor General until his death in 1780.

Because of the Jacobite Uprising, Great Britain had to withdraw troops from the continent, so the French army of the Marshal of Saxony was able to take Brussels, Mechelen, Antwerp, Charleroi and Mons almost unhindered. During the siege of Namur , the Austrian relief army was defeated in the battle of Huy . The Marshal of Saxony took the fortress and defeated the Austrians under Prince Karl again on October 11, 1746 in the Battle of Roucoux . At the end of the year, the Austrian Netherlands and Luxembourg were in French possession. From 1747 to 1749 Prince Karl was involved in reforming the Austrian army, and in April 1749 he returned to Brussels.

In the Seven Years War

After the outbreak of the Seven Years' War he fought again against Frederick II. In the spring of 1757 he led almost 60,000 men to relieve the army under Browne , which was enclosed in Prague , but was defeated on May 5th in the Battle of Prague . The victory of the army rushing to the rescue under General Daun near Kolin (June 18) restored freedom of action to his troops. On December 5, 1757, however, he suffered a crushing defeat against Friedrich II in the Battle of Leuthen , which resulted in his recall from the high command of the Austrian army. However, this was sweetened for him by the award of the Grand Cross of the Military Maria Theresa Order on March 7, 1758, whereby he was the first to receive this award. Returning to Brussels as Governor General, he guided the Brabant estates with sensitivity. His organization brought new prosperity to the country, he developed industry and promoted the arts and trade.

Grand Master of the Teutonic Order

When the Grand Master of the Teutonic Order, Clemens August von Bayern, died in 1761, he was the only candidate for the Grand Master with a chance, with support from Vienna. He was unanimously elected 52nd Grand Master by the Grand Chapter of Mergentheim on May 4, 1761. Since he was not yet a member of the order, he was dispensed from the probationary year, knighted and enthroned in the Mergentheimer Schlosskirche the following day. He now had to return his other medals, as required by the rules of the order.

He personally took care of the affairs of the order, especially the reorganization of the order's finances, and convened the secret conference every week . At the great chapter of 1769 he had his nephew Maximilian Franz of Austria elected as coadjutor and on July 9, 1770 he was knighted in the Augustinian Church in Vienna. The thrifty prince made his successor the sole heir in his will and left him 580,000 guilders.

The office of grand master was by no means a main concern for the bon vivant and exquisite art connoisseur, but rather an additional supply as imperial prince with influence, with the help of Vienna. His policy was fully integrated into the intentions of the ore house and at the same time served the stabilization measures and recuperation efforts of the order as a noble corporation and underpowered imperial and district class. During his tenure he only visited the headquarters of the Order in 1761, 1764 and 1765, so that he always carried out official business from Brussels. He was well aware of his obligations to the order, was considered strict and forgiving. He remained Grand Master until his death in 1780.

His grave is in Brussels.