from Wikipedia, the free encyclopedia
Battle of Hohenfriedeberg
Part of: Second Silesian War 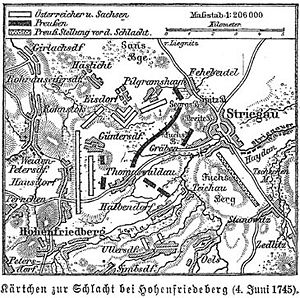 The Battle of Hohenfriedeberg took place on June 4, 1745 during the Second Silesian War .

After the unfavorable outcome of the campaign in Bohemia in 1744 for Prussia , the Prussian King Friedrich II decided to await the enemy in Silesia. On May 29, 1745, the king assembled his Prussian army near the town of Frankenstein : there were 65,000 men with 192 heavy artillery pieces . On the same day, the Austrians and Saxons under Prince Karl Alexander of Lorraine and Duke Johann Adolf von Sachsen-Weißenfels crossed the border over the Landeshuter Pass with 72,000 men and 121 guns. On the afternoon of June 3, the Austrians advanced from the mountains to the heights northeast of Hohenfriedeberg ( “Prince Karl has appeared on Friedbergs Höhn” ) and set up Prince Karl's command post on the Galgenberg (later the Siegeshöhe ). Friedrich decided to attack the enemy by surprise and therefore left his camp at Alt-Jauernick northwest of Schweidnitz on June 3 at around 9 p.m. , while the watch fires continued to burn as a deception. At 2 o'clock in the morning he gave his orders: the army should march to the right and the cavalry of the right wing should develop towards the Pilgramshain ; the right wing of the infantry had to line up opposite the Gule , a lowland meadow southwest of Pilgramshain. The left wing cavalry was to cover the deployment of the left wing infantry.

The enemy attack began at 4:00 am and Pilgramshain was occupied by the Saxon army ; the left wing of their cavalry marched south of it. At 5:30 a.m. the Prussians attacked and the Saxons' cavalry was defeated. The 46 squadrons of the right Prussian wing under Field Marshal Wilhelm Dietrich von Buddenbrock (already 72 years old at the time) now took action against the Gule , supported by 15 battalions from the left, so that the Saxons were thrown out of Pilgramshain. At 7 o'clock the left wing of the Austro-Saxon army was defeated. In the meantime, her right wing (only Austrians) was deployed between Günthersdorf and the Striegauer Wasser river . At 6:30 am the Prussian left wing began its deployment; there were fierce equestrian fights, in which Major General Hans Joachim von Zieten was decisive on the Prussian side with his intervention. At 8:30 a.m. the Prussian left wing attacked Günthersdorf and Thomaswaldau . The Prussians suffered considerable losses, the Austrians held out until their Thüngen regiment began to totter around 9 o'clock. Thereupon the Bayreuth Dragoon Regiment (1,500 men) under General Friedrich Leopold von Gessler and Lieutenant Colonel Otto Magnus von Schwerin advanced through a gap in the ranks of their own infantry against the 20 Austrian battalions. By this blow the enemy was completely taken by surprise and completely routed. The Bayreuthers took 2,500 prisoners and captured 66 flags with only 94 losses of their own. So the battle was decided in favor of Prussia.

In the afternoon Frederick the Great inspected the captured flags and the captured officers on the Galgenberg, the command post of the escaped Austrian commander Karl von Lothringen. Friedrich is said to have composed the famous Hohenfriedeberger March on the battlefield or in the “Favorite” pavilion of the neighboring Rohnstock Castle , where he stayed . The text is said to come from a common soldier. But what speaks against this legend is that the march calls the regiment “Ansbach-Bayreuther” - this name was only introduced more than 20 years after the battle.