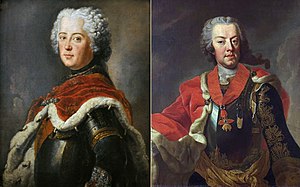 The Battle of Soor (Sohr, Sorr) took place on September 30, 1745 during the Second Silesian War near the village of the same name, Soor, southwest of Trautenau in Bohemia .

Both armies spent more than three months harassing each other with skirmishes and skirmishes in the interior of Bohemia, where Frederick II had followed the retreating Austro-Saxon army under Prince Karl of Lorraine after the Battle of Hohenfriedberg . In the middle of September the Prussian king was forced to return to the Bohemian border due to supply shortages in order to be able to supply his army there until the onset of winter at the enemy's expense. In addition, he had to split his forces, as Saxon forces threatened his national borders. Afterwards it should go to the winter quarters in Silesia. Prince Karl followed the king, on the one hand urged by his empress to seek the attack, on the other hand weakened by the departure of the Saxon troops. He therefore considered his army too weak for further ventures, so he acted cautiously. Three days after Friedrich II had moved into a camp near Staudenz, the allied Austrians and Saxons moved into a camp near Jaromiersch on September 22, 1745, the two armies 18 kilometers apart. In the following seven days, Prince Karl, supported by Field Marshals Prince Lobkowitz and Prince Arenberg , undertook several investigations into how one could surprise and defeat Frederick's army in their camp.

Seeing the Prussians in a dire position with discouragement and exhaustion, he planned to have regular troops attack head-on, while light troops should circumvent the camp, creating confusion. Resistance was hardly expected, as the steep slope to the west was unfavorable for the enemy. In the valley, swampy meadows, ponds and small wooded areas prevented the enemy from forming. If the enemy could be routed to the east, water arms running out at acute angles, bordered by the impassable royal forest in the south, would trigger an unpredictable chaos of retreat among the Prussians. Prince Karl was in a superior position.

The formation of the troops

Due to different departure times, the various troops were in their starting positions at different times. On the left wing of the allies, Field Marshal Prince Lobkowitz stood ready with 10 battalions, 15 grenadier companies on foot, 30 squadrons and 15 grenadier companies on horseback and carbines. His position was dominated by 16 heavy guns on the Graner Koppe. The bulk of the army stood in two meetings south of the Graner Koppe centered on the enemy with another heavy battery south-west of Burkersdorf, all under the command of Field Marshal Herzog von Arenberg. This so-called right wing was bordered by 6 cavalry regiments under General of the Hohenems Cavalry, all in all 42,000 men.

On the part of Frederick, who had been aware of the approaching enemy since the morning of September 29th, it was believed that Prince Karl wanted to block the retreat to Silesia. When orders were to be issued at around 5 a.m. on September 30th to leave the camp and retreat to Silesia, reports penetrated that the enemy army was positioned to the west of the camp and was preparing to fight. Immediately Friedrich had his troops prepared for battle, which formed in a remarkable haste and immediately followed his orders. Almost 22,000 Prussians expected an enemy almost twice as strong.

Although the attack planned for September 29 could not take place because the right wing of the allies was still far behind, the agreements, orders and events with the Austro-Saxon troops in the morning hours of September 30 were somewhat in the dark. Did Prince Karl not want to attack at the last moment, but just show presence, believing that the Prussians would withdraw knowing that they were in an unfavorable position? Or did he want to attack, but negligently let valuable time slip by?

At first there was fog over the area when, after five o'clock, Field Marshal von Buddenbrock , coming with his cavalry from the Prussian camp, headed for Neu-Rognitz in order to then swivel west and thus be able to bypass the Graner Koppe a little to the north. In the course of this venture, however, the rising sun made the fog disappear, which allowed the heavy guns of the allies on the Graner Koppe to fire. Not inconsiderable losses were the result for von Buddenbrock's riders. The battle was on. At the same time, Major General Blankensee's infantry formed on the eastern slope of the Graner Koppe to attack the enemy's guns from the front. Around eight o'clock, now riding from the north towards the positions of the allies, the von Buddenbrocks cavalry broke into the formation of the Austro-Saxon cavalry, took them by surprise and confused them, and drove them back into the forest beyond. Prince Lobkowitz was ridden over and seriously wounded. It is true that one was no longer exposed to the fire of the heavy artillery during this attack, but when they arrived on the Graner Koppe, the infantry standing above attacked them on their left flank. In the meantime the Blankensee men, coming from the east, had come within 150 meters of the enemy's battery, but came to a standstill due to heavy losses and finally gave way when Colonel Benda and five grenadier companies met them energetically. Blankensee found death. The Wedel, Tresckow, Finck and Anhalt regiments fell behind the second meeting, which had followed the first with the La Motte, Blankensee and Geist regiments. It stopped Benda's men with an intense and disciplined peloton fire and then broke into the ranks of the allies with the bayonet felled and took the head and battery. The strong cavalry of the allies on the Graner Koppe could not counter this and did not support their own battery or infantry. On the one hand, due to the terrain, it was unable to develop, and on the other hand, there was a lack of orders to face the enemy. They turned to escape. Only Lieutenant Preysing Field Marshal tried, like Colonel Benda, to intervene with his three dragoon regiments, but was drawn into the vortex of flight. It was 9:30 a.m.

Frederick II, who dominated the decisive elevation of the battlefield and had thrown the left wing of his opponent, now wanted to conquer the enemy positions from the north. However, he did not put this idea into practice, as the allied troops approached the center of Burkersdorf to take it. Rapid intervention, especially by the 2nd Battalion of the Kalkstein Regiment, prevented this. The entire center of Friedrich started moving, passed Burkersdorf and came to the west of the town in front of the other heavy battery of the allies. The heavy fire of this battery and the rising terrain that the regiments had to overcome caused the Prussians to pause there too. The losses rose rapidly. Major General Prince Ferdinand von Braunschweig-Wolfenbüttel went there personally, although he was already wounded, and was able to take the battery. The regiments of Prince Xaver, Botta, Bayreuth and Vettes, led by Field Marshal Prince von Sachsen-Gotha, fought long and persistently, but ultimately, they too were unable to cope with the pressure that was now acting simultaneously from the north and east and had to give way.

While the battle was raging in the center, Frederick II was able to throw the released cavalry on his right wing as well as the cavalry of the Prince of Anhalt standing by on the left wing against the enemy south of Burkersdorf and accelerate his retreat. The infantry regiments Damnitz and Kolowrat were completely dispersed. Many of them were captured. Inexplicably, the 36 squadrons standing there avoided the attacking Prussians and remained inactive.

The detached corps of the Croatian General Nadasdy , which was supposed to bypass the enemy and fall in the rear, contented itself with an attack on the Prussian camp, which had been hastily evacuated that morning, and took possession of the enemy's war chest worth 200,000 thalers. The cabinet councils and the servants who accompanied the army and various baggage also fell into the hands of the Croatian. However, it missed its real mission of being a threat to the Prussians behind the front. So the events ended at 1:00 p.m.

Summary, considerations and consequences of the battle

To this day, connoisseurs and experts wonder how the Prussian cavalry managed to attack the Graner Koppe hill with horses. It seems undisputed that only the discipline of the troops and strong animals could achieve such an achievement.

On the side of the allies, Field Marshal Lobkowitz was blamed for a lack of courage to counterattack his own cavalry on the left wing when the Prussian cavalry advanced to attack.

Friedrich II later said in retrospect that it was far more honorable to be destroyed by selling yourself dearly than to perish while retreating, which might have turned into a shameful escape.

The 73-year-old Field Marshal Buddenbrock, a man of many skirmishes and battles, later reported that he had not been exposed to any heavier artillery fire in his career than east of the Graner Koppe on his ride to the starting position of the later cavalry attack.

The day of thrush drew the Prussians' attention for the first time to two great military men of the coming years. On the one hand, to the 23-year-old Major von Seydlitz , who had noticed and reported the troop movements of the enemy with his squadron early in the morning and, on the other hand, to the 21-year-old Second Lieutenant von Möllendorf , who distinguished himself under Prince Ferdinand towards the end of the battle south of Burkersdorf and had been praised by the king on the battlefield.

The strategic success of the Prussians was little, although Prince Karl was forced to retreat, but Frederick II wanted to move into his winter quarters in Silesia and not in Bohemia from the outset.

Politically, Frederick had won even less because the peace negotiations had become a long way off, on the one hand due to internal political entanglements in England and on the other hand his army itself gave cause for this, as it was still outnumbered by the allies in terms of men and gave a worn-out impression. The Austrians and Saxons could not be dissuaded from directing their armies further in the direction of Brandenburg, the heartland of the Prussians.

The tactical and moral success for Frederick's troops, however, was immensely high, since they had thrown an enemy in an excellent and even dominant position with far inferior forces.