Friedrich Wilhelm Freiherr von Seydlitz-Kurzbach (born February 3, 1721 in Kalkar , † November 8, 1773 in Ohlau ) was a Prussian cavalry general and is considered one of the most important cavalry leaders in Prussia.

When his father, a major in the cavalry, died in 1728, his mother and her children moved to Bad Freienwalde (Oder) , where von Seydlitz attended school and grew up in cramped conditions, until the Swedish Margrave Friedrich Wilhelm, his father's former colonel, was thirteen when the page took him to the court. There Seydlitz developed an exceptionally good way of dealing with horses. In 1740 the King of Schwedt withdrew him to the cuirassier regiment in Belgard an der Persante as a cornet . As such, he took part in the 1st Silesian War on the Prussian side . In the battle near Kranowitz on May 20, 1742, he was so distinguished that, when he was captured, he was exchanged for an Austrian captain .

On the evening of June 20, 1757, King Frederick the Great appointed von Seydlitz to be the youngest major general and commander of the cavalry for the successful cover of the Prussian retreat after the lost battle of Kolin . He also received the Pour le Mérite for his glorious leadership of 15 squadrons .

On November 5, 1757, he decided the Battle of Roßbach for the Prussians against French troops and the Imperial Army through two delayed cavalry attacks with 33 squadrons . Seydlitz was wounded and was awarded the High Order of the Black Eagle by the king while he was still on the battlefield . A few days after the battle he was promoted to lieutenant general by Friedrich II .

An example of the interpretation of Prussian obedience is an incident from the Battle of Zorndorf . Seydlitz refused several times the order of the king to intervene with his cavalry units in the battle, although he was threatened that he was liable "with his head for the outcome of the battle". Seydlitz only attacked when he could achieve the maximum effect by attacking the flank. This contributed significantly to the victorious outcome of the battle. The independent check as to whether the verbatim execution of an order received meets the underlying intention of the issuer is an essential part of the conduct with order that is customary today in the Bundeswehr .

During his convalescent stay in Berlin in October 1760, he helped defend the Prussian capital against a Russian-Austrian attack, but was unable to prevent the Russian occupation of Berlin . In the battle of Teplitz on August 2, 1762 von Seydlitz suffered a defeat.

Seydlitz always began his attacks by throwing his pipe into the air.

He was married to Susanne Johanna Albertine von Hacke (1743-1804) since April 18, 1760 . She was the daughter of Lieutenant General von Hacke (1699–1754) in command of Berlin. The two had a daughter Wilhelmine, who was initially married to the war council Friedrich Ewald Ernst von Massow (1750–1791). After her divorce, she married the Polish Count von Monczinsky on July 2, 1785, from whom she was divorced again.

He had numerous amours and fell ill with syphilis at a young age ; this increasingly bothered him and prevented his war wounds from healing. It is considered a major cause of his early death. He was buried in the mausoleum next to his mansion Seydlitzruh ( Minkowsky Pałac ), formerly Namslau district in Silesia. The body was desecrated by Soviet soldiers when the Red Army marched in in 1945 and has been considered missing ever since. The mausoleum was later demolished by Poles. 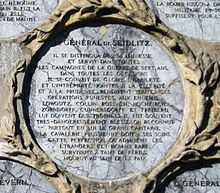 Honor plaque for Seydlitz on the Rheinsberg Obelisk

The Seydlitzplatz in were named after him Tempelhof-Schöneberg and Seydlitzstraße in the Mitte district , the district of Steglitz-Zehlendorf and Tempelhof-Schöneberg, and the hospital ship Seydlitz , the Great cruiser Seydlitz and the heavy cruiser Seydlitz . There are Seydlitzstraßen named after him in the Dortmund district of Hörde , in the city of Plettenberg in the Sauerland, in Schwedt / Oder (since 2012) and in Bocholt , Lünen (Westphalia) as well as in Bremen and in Wuppertal - Barmen , where they meet the Schwerin - and the Zieten -Straße forms the "general settlement".

The Von Seydlitz barracks built in Kalkar in the late 1960s was named after him. There is also a Seydlitz footbridge and a riding club that bears his name. The 74th year of junior officers in the Army chose 2006 at the Army Officer School (OSH) in Dresden von Seydlitz as the year name.

Anna Louisa Karsch dedicated the poem To Seydlitz to General-Lieutnant von Seydlitz , Theodor Fontane dedicated three poems to him: Herr Seydlitz auf dem Falben , Seydlitz and the mayor of Ohlau , and Calcar, that is Sporn . Anton Mayer and Eckart von Naso dedicated novels to him.