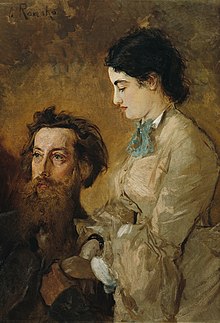 The sculptor Reinhold Begas with his wife Margarethe , painting by Anton Romako

Reinhold Begas was the son of the painter Carl Joseph Begas and received his first training from the sculptor Ludwig Wilhelm Wichmann in Berlin . 1846-1851 he was a student of the sculptor Christian Daniel Rauch at the Berlin Academy, which was under the direction of Johann Gottfried Schadow from 1815 to 1850 . In 1848 he became Rauch's employee. In 1852 he achieved his first success with the plaster cast by the Hagar and Ismael group at the Berlin Academy Exhibition. Thanks to a scholarship , he was able to stay in Rome from 1856 to 1858 . There he met Arnold Böcklin and Anselm Feuerbach . Here in 1857 the marble group Amor and Psyche was created , which is influenced by a sculpture by the Basel sculptor Ferdinand Schlöth, who worked in Rome and which follows the classicist Thorvaldsen school.

In 1861 he was offered a position at the Grand Ducal Saxon Art School Weimar , which had been founded a year earlier , where Böcklin had already taught and where he met Franz Lenbach for the first time. He stayed there until 1863 and then returned to Berlin. From 1863 to 1864 he was again in Rome, from 1865 to 1869 again in Berlin. In 1868 he created the long-lost, rediscovered in Italy in 2009 sculpture made of Carrara marble Pan as a teacher of flute playing that now in Begas House in Heinsberg is, a regional museum for the coming thence artistic family Begas. In 1869 and 1870 he worked in Rome and Paris . After that he worked mostly in Berlin, where he was accepted into the Prussian order " Pour le Mérite for Science and the Arts" in 1883 . His time in Berlin was only briefly interrupted by a stay in Rome in 1892.

His monumental works were characteristic of Prussian Berlin during the imperial era. Kaiser Wilhelm II in particular valued the pathos of Begas' work and, after 1888, procured him a large number of representative commissions. The best-known examples of this are the National Monument to Kaiser Wilhelm I , unveiled in 1897, the artistic overhead line on “ Siegesallee ” (1895–1901, destroyed), for which he himself contributed two groups, and the Bismarck National Monument completed in 1901 in front of the Reichstag building (Transferred to the Großer Stern in 1938 ). Reinhold Begas also created the Neptune Fountain at the Berlin City Palace from 1886 to 1891 (cleared in 1950, placed in front of the Berlin City Hall in 1969 ). He received numerous commissions for portrait busts, monuments and small sculptures. From 1871 until his death in 1911 he was a member of the Berlin Artists' Association and a member of the Berlin Academy of the Arts , of which he headed the master's studio from 1876 to 1903.

Begas was married to Johanna Margarethe Augusta Philipp, called "Grete" or "Gré", and had two sons, u. a. the sculptor Werner and Freddy and a daughter Molly. He lived in a villa he built in the Italian style with a studio at Stülerstrasse 2-4 in Berlin-Tiergarten . In 1898 he built a villa in Baden-Baden for his wife, who was suffering from tuberculosis . The house is still there. Begas died just three weeks after his 80th birthday in Berlin in early August 1911. He was buried in the Old Twelve Apostles Cemetery in Schöneberg (grave site 222-7-13 / 14). By resolution of the Berlin Senate , the last resting place of Reinhold Begas has been dedicated as a Berlin grave of honor since 1952 . The dedication was extended in 2016 by the usual period of twenty years. Begasstrasse was named after him in the Malerviertel in Berlin-Friedenau as early as 1892.

“Reinhold Begas was an eminently brilliant mind. He knew his Goethe, Shakespeare, Ariost and Dante like no other. Ingenious, as I have hardly met an artist, his diligence was quite extraordinary; he was working in the predicament of an almost demonic creative instinct and under the eternal spur of his genius. Drafts were lined up with drafts, clouds of plans always floated through his pensive mind. And at the same time to enjoy this enormous vitality, this hunger for life, this unwavering courage to enjoy, truly a person of the Renaissance, in a certain sense unscrupulous, full of risks for his princely desires. And yet a child's heart, despite everything. "

Schiller Monument (1871) on the Gendarmenmarkt, Berlin 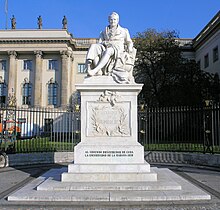 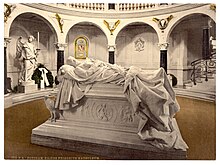 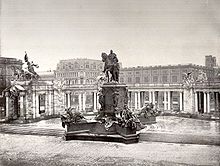 The Prussian Monument Institute in Neuss can provide evidence of the following monuments that were created by the sculptor Reinhold Begas: 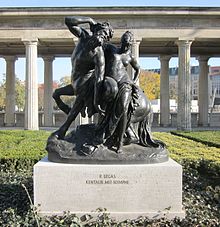