The title of this article is ambiguous. For the font of the same name, see Arnold Böcklin (font) .

Arnold Bocklin (* 16th October 1827 in Basel , † 16th January 1901 in San Domenico at Fiesole , Florence ) was a Swiss painter , draftsman , graphic artist and sculptor of Symbolism . He is considered one of the most important visual artists of the 19th century in Europe. 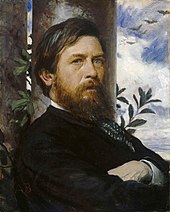 Böcklin was the son of the silk manufacturer Christian Friedrich Böcklin and grew up in the Steinenvorstadt in Basel. He received drawing lessons in Basel and studied from 1845 to 1847 at the Düsseldorf Art Academy with Johann Wilhelm Schirmer , Theodor Hildebrandt and Rudolf Wiegmann . In 1847 he went on a study trip to Belgium with Rudolf Koller , where he was greatly impressed by the work of Peter Paul Rubens . Further trips led to Switzerland and the Netherlands. In 1848 he went to Paris with Rudolf Koller and studied at the Louvre . This was followed by a job in Johann Gottfried Steffan's studio . He worked in Basel until 1850, where he painted his first characteristic landscapes.

From 1850 to 1857 he worked intermittently in Rome, where he dealt with the Old Masters . During his seven-year stay there, he was under the strong influence of Gaspard Dughet and Franz-Dreber . In 1853, Böcklin married Angela Pascucci, who was the model for many of his paintings, and moved to Basel in 1857.

In 1856 Böcklin stayed in Munich and in 1858 - following the recommendation of Anselm Feuerbach - received the order from the Hanoverian consul in Palermo Karl Wedekind to paint the dining room in his villa in Hanover. He became widely known in March 1859 through the painting Pan in the Reeds . From 1860 to 1862 he taught, supported by Count Adolf Friedrich von Schack , as a professor at the Grand Ducal Saxon Art School in Weimar . The Hunt of Diana was his first major commission in 1862.

In 1861 he was in Rome and visited Naples and Pompei . During this time he completed his unmistakable style with the clear contours and the intense luminosity of his colors, through which he illustrated a world of mythological mythical creatures in his paintings.

Böcklin and his family returned to Basel from Rome in 1866. In 1868 Jacob Burckhardt gave him the contract to furnish a garden room in his house in Basel with three frescoes for Karl Sarasin . Böcklin asked Rudolf Schick to support him with the execution. The three murals Rast on the Flight into Egypt , King David with the Harp and The Walk to Emmaus were completed within two months . You are now in the Kunstmuseum Basel .

Hans Sandreuter was Böcklin's closest pupil; some critics accused him during his lifetime of being a Böcklin epigone .

In 1871 Böcklin created six masks for the garden facade of the Kunsthalle Basel and in the same year stayed in Munich until 1874, where he painted the self-portrait with fiddling death in 1872 . From autumn 1874 to April 1885 he lived in Florence, mostly in Wladimir von Swertschkoff's studio house . Here five versions of the picture Die Toteninsel were created .

In 1875 Louis Sussmann-Hellborn bought Böcklin's painting Meeresidylle (also Triton and Nereide ) for 10,000 marks (later in the National Gallery , lost since 1945).

Böcklin had a lifelong longing to fly. He constructed his first flying machine around 1855 and tested it in Rome. Gustav Adolf zu Hohenlohe-Schillingsfürst , at that time Monsignor and later German Curia Cardinal in Rome, obtained from Pope Pius IX. permission to try out the flying machine in the great hall of the papal riding school. The Inquisition at that time obtained an arrest warrant for Böcklin; he fled from Rome.

Around 1883 Böcklin stayed in Berlin and failed on the Tempelhofer Feld with an attempt to fly without a motor.

From 1885 to 1892 he lived in Hottingen near Zurich , where he had a studio building built by the Zurich architecture professor Georg Lasius at today's Böcklinstrasse 17 . Gottfried Keller was often a guest there. After a stroke in 1892, he settled near Florence with his wife and sons and later moved into his Villa Bellagio estate in Fiesole. Louise Stadler's «Stadlerische Kunstschule» took over Böcklin's studio. 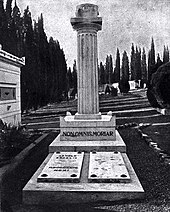 Böcklin died on his estate and was buried on January 18, 1901 in the Protestant cemetery Cimitero Evangelico agli Allori near Florence. The grave was designed by his son Carlo; it bore the inscription from Horace's ode "Non omnis moriar": "I will not die completely - not everything about me dies".

Karl Stauffer is also buried in the same cemetery . The municipality named an access road to the property Via Arnold Böcklin . August Bösch continued his studio in Zurich.

On the 100th anniversary of Böcklin's death in 2001, his studio building in Zurich was repaired. The artist's studio Arnold Böcklin foundation commissioned the clarification of the garden's history and a maintenance plan for the then neglected studio garden.

In the same year, the Kunstmuseum Basel showed works by Böcklin in a comprehensive retrospective.

Alongside Ferdinand Hodler , Max Klinger and Lovis Corinth , Böcklin is one of the main representatives of German symbolism, which broke with the dominant academic painting and predominant naturalism of the second half of the 19th century. Böcklin was also one of the preferred selection of contemporary artists suggested by the “Committee for the Procurement and Assessment of Stollwerck Pictures” of the Stollwerck chocolate factory in Cologne for design orders. Surrealists such as Giorgio de Chirico , Salvador Dalí and Max Ernst saw Böcklin as one of their forerunners and praised him as a “brilliant and ironic artist”.

The three wall paintings in the stairwell of the Natural History Museum in Basel were created between 1868 and 1870.

The name Böcklin was also known by the created after his death by Otto Weisert and named after him font in the Art Nouveau style .

From 1912 to 1913 Max Reger created his four tone poems based on A. Böcklin op. 128, in which he musically implemented four paintings by Böcklin:

In addition to Reger, other late Romantic composers such as Sergei Rachmaninow ( Die Toteninsel , op. 29) were inspired by Böcklin's paintings to create tone poems . Felix Weingarten wrote the symphonic poem Das Gefilde der Blessed as Opus 21 . The fourth movement of the 2nd Symphony op. 115 (1900), called the Böcklin Symphony by Hans Huber , is also a translation of Böcklin's paintings into music. Further works are Eine Reiter Burlesque (based on the painting The Adventurer ) by Fidelio F. Finke , the ballad for Böcklin's picture Villa am Meer by Bohuslav Martinů and the Drei Böcklin Fantasias by Felix Woyrsch . These consist of the three sentences Die Toteninsel , Der Eremit and Im Spiel der Wellen . There are other settings of the island of the dead by Andreas Hallén , Joachim Albrecht Prince of Prussia , Fritz Lubrich , Giacomo Orefice and Heinrich Schulz-Beuthen. The Etude in G minor Opus 33.8 and the Prelude in B minor Opus 32.10 by Rachmaninoff were also inspired by paintings by Böcklin ( Morning and The Return ).

"Portrait art is the most miserable genre of painting because it is the artist who is most bound."