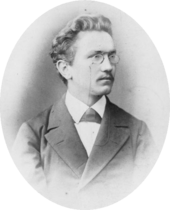 Hans Huber was born in Eppenberg , Solothurn , where his father worked briefly as a teacher. He soon took a job as an accountant in Schönenwerd , where Hans Huber spent the first years of his childhood. He is said to have got his first musical impressions from attending masses in the collegiate church there and from his parents - his father was an amateur musician, and his mother also came from a "music-loving family". At the age of ten, Hans Huber was accepted into the Partist Institute attached to the St. Ursenstift in Solothurn and trained as a choirboy. He showed his talent at the piano early on . In 1870 he began his studies with Carl Reinecke at the Leipzig Conservatory .

After his first job in Alsace, he moved to Basel in 1877 , where he worked as a piano teacher at the general music school, which he directed from 1896. Together with Friedrich Hegar , who worked in Zurich , Huber initiated the foundation of the Swiss Tonkünstlerverein (STV) in 1900. He was also responsible for founding the Basel Conservatory (1905). With the honorary doctorate of the University of Basel awarded (1892), he led from 1899 to 1902 the Basle Choral Society and served until 1918 as director of the Conservatory in Basel.

Bust of Otto Roos , Music Academy of the City of Basel

Hans Huber spent the last years of his life in Minusio in the Villa Ginia and died in Locarno in 1921. He married Ida Angelika Petzold in 1880. She was the daughter of Karl Eugen Petzold .

In his honor, the chamber music hall of the Basel city ​​casino was renamed the Hans Huber-Saal ; In addition, a street was named after him in 1930 in the Gundeldingen district of Basel . There are also Hans-Huber-Strassen in Solothurn (in a small “composers' quarter” in which Strassen are also named after Stephan Jaeggi and Edmund Wyss ) and in Zurich .

Chamber music and other works