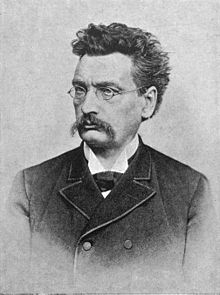 Friedrich Hegar, son of the music teacher Ernst Friedrich Hegar, who was born in Darmstadt into a family of musicians and who also worked as a piano dealer in Basel, received his first musical training in the subjects of violin, music theory and composition. At the end of the 1850s he began studying composition at the Leipzig Conservatory.

After completing his studies in 1860, he worked as a conductor in Warsaw , before moving to Gebweiler in Alsace a year later , where he became deputy conductor under Julius Stockhausen . In 1863 he became the conductor of the orchestra club in Zurich, later the Tonhalleverein . This was done at the instigation of Theodor Kirchner , with whom he should have enjoyed a long friendship. He was to hold this position until 1903. From 1865 he also directed the Zurich Mixed Choir and was also conductor at the Zurich Theater. At the same time he was involved in the Allgemeine Musik-Gesellschaft (AMG). Until 1914 Friedrich Hegar headed the Zurich Conservatory , which was founded on his initiative. He died in Zurich in 1927 and was buried in the Fluntern cemetery.

In the second half of the 19th century and at the beginning of the 20th century, Hegar had a formative influence on the development of music in Zurich and Switzerland. As the conductor of the Tonhallenverein, he led its orchestra to international renown. As director of the Zurich Conservatory, he constantly strived to improve the training of young musicians. As a choir director he worked on the development of male singing and is considered the founder of the male choir ballad. His compositional work mainly includes songs , choirs and instrumental compositions. Under his aegis, several Zurich music festivals and in 1900 the first Swiss Music Festival took place.

Friedrich Hegar has been honored several times. The University of Zurich awarded him an honorary doctorate at the end of the 19th century. In 1917 he became a member of the Academy of Arts in Berlin .

His son was the cellist Johannes Hegar , his brother the cellist Emil Hegar , and his nephew the opera singer Peter Hegar .