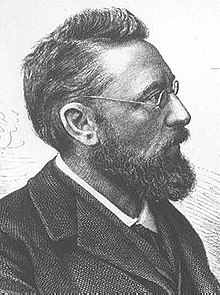 Memorial plaque on the residential building Kanonengasse 1 in Liestal

Widmann spent his childhood and youth in the rectory of Liestal , where his father Joseph Otto Widmann, a former Cistercian monk from Heiligenkreuz Abbey , was a reformed city ​​pastor. A frequent guest in the rectory was Widmann's friend Carl Spitteler, who was three years his junior . After attending school in Liestal and Basel, he studied Protestant theology and philosophy in Basel, Heidelberg and Jena. In 1865 Widmann married Carl Spitteler's widowed aunt Sophie Brodbeck, b. Ernst (1836–1911), from Winterthur . In 1868 he became director of the Bern residents 'girls' school, but in 1880 - despite his extraordinary popularity with students - he was relieved of his post or not re-elected because, in the opinion of the authorities , his epics Buddha and Moses and Zipora express a " corrosive worldview" brought. From 1880 he was feuilleton -Redaktor at the Bern newspaper Der Bund .

Widmann acquired the house on the "Murihalde" in Bern from the mother of the later artist and writer Bertha Züricher , who reported several times during the Berner Woche about her memories of Widmann in words and pictures .

During his lifetime, Widmann was one of the most influential literary critics and promoters in Switzerland. He encouraged Carl Spitteler to pursue his career as a writer, supported Ida Bindschedler , discovered Ricarda Huch and Robert Walser , whom he helped to get his first publications, traveled through Italy with Johannes Brahms from 1874 and corresponded with Gottfried Keller .

"I have never known anyone who, like he did when he appeared, aroused joy all around and refreshed the courage to face life."

“Meanwhile, his noble liveliness instilled in me the greatest confidence. Encouragement and encouragement emanate from people who are able to charm. "

“You have mastered the great task of writing another Italian trip, and you have blown the bird in front of many newcomers. Even the splitting of the travel subject into two persons, who have to divide each other in views and judgments, is an ingenious grip, like the egg of Columbus, and carried out with as much grace as wisdom, in that with Müslin the extravagant quirk is everywhere in the right place and that makes the humor all the finer. And so what the two gentlemen see and enjoy, in spite of the century that has almost passed since Göthe, still brings so much of the new, unsaid, surprising that the volume of Hesperian literature will in future be integrated. "

«Apart from Leuthold and Gottfried Keller, there is no one among contemporary Swiss poets who could dispute the palm of his hand; Even Gottfried Keller lags behind him when it comes to mastering form. "

Widmann's critical review of Nietzsche's Beyond Good and Evil in the Bund was one of the earliest reception of Nietzsche and may have won the then almost completely unknown philosopher some readers; Nietzsche himself felt at least partially misunderstood in this.

Widmann fountain at the Burg secondary school in Liestal 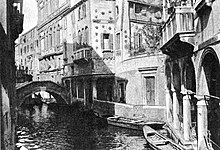 To commemorate Widmann, the Widmann fountain was built in Bern in 1914 at the southern end of the Hirschengraben (opposite the Bund editorial office at the time ) , which has been adorned by Hermann Haller's bronze statue Young Man with Blue Thrush since 1923 . In Liestal one and was the 1946th a. Widmann's poetry museum opened. On the 50th anniversary of Widmann's death, the Widmann fountain was inaugurated on November 6, 1961 in the playground of the Burg secondary school in Liestal; originally a relief with the title The Saint and the Animals was attached to one side of the basin . There are streets named after J. V. Widmann in Liestal and Thun . In Venice there is a Calle Larga Widmann that merges into the Ponte Widmann (Widmann Bridge), on the other side of which the Sotoportego Widmann branches off to the right in a southerly direction . Widmann's estate is kept in the Liestal Poet and City Museum and in the Bern Burger Library.

Widmann's literary works, which include plays , stories , verses and travelogues , are largely forgotten today, but are gradually being rediscovered.

"As a poet he has proven himself through his imagination, strength of characteristics, nobility of disposition and an uncommon ease of speech treatment."

“In Joseph Victor Widmann's writings, Dr. Bettelheim repeats the same ideal that fulfills all Viennese poetry from Grillparzer to Saar and Marie Ebner ; this ideal is called: "Peace to the soul". Widmann is the healthy child of a healthy cross between the Austrian and Swiss spirit; the columnist Widmann shows the same grace as the columnists of Vienna. "

«Known to the readers of the“ Bund ”as a brilliant columnist and critic, JV Widmann is at the same time our most versatile and productive poet, who, however, has not yet found the recognition he deserves, although he has been a writer for 30 years in Germany only broke through the barriers of literary cliques with the performance of his play “Beyond Good and Evil”. He is just one of the real poets, and it is well known that in Germanic countries these are only gauged for their meaning at the age of 60 or rather 70, usually long after their death . "

«Several of his much-read travel books […] clearly reveal their columnist origins and really need not be ashamed of them. Because Widmann is one of the not exactly numerous luminaries of the modern art genre brought to life by journalism, which intersperses the studies of the historian, critic and philosopher with elements of lyrical and epic poetry and pours the mixture thus obtained into a new, graceful form that we call feuilleton . The columnist should be an artist, and Widmann is a master of this art. "

«He seems to have retained just as much of the light Viennese blood as serves to pleasantly revive the Swiss national character. Our heavy, tough human pastries can use such sourdough well. "

«Widmann is one of the most subtle poets going there, but his works have not yet reached the people enough. He was one of those poets who, according to Lessing, are more praised than read. "

“He had a quirk. Inclined to irony, mischievous, colorful, light, graceful, smiling, at times dandy, he is strongly reminiscent of Ariost and Wieland , with whom he has in common the graceful, often playful form and the elegant flow of verses. "

«Widmann was an exemplary journalist; receptive, cosmopolitan, well-educated, so that he could draw inspiration from the day's processes and combine it with higher points of view, witty, witty, not too easy and not too difficult, more stimulating than instructive, rich in ideas, with all mobility stuck in the basis of character. In addition, he was a poet. He had an admiration that I couldn't understand for Spitteler, for whom he prepared the way as much as possible and whom he placed high above himself; on the other hand, I believe that he, not Spitteler, had the native poetic spirit, even though he may have expressed himself in a limited area. He had a lyrical vein, the lyre was his own, which you put into the hands of poetry when you depict it figuratively. Since Spitteler lacks the lyric-melodic element, I did not want to allow him to be considered a poet. Widmann was too free to be angry with me for this, just as he did not regard me less or give up because Spitteler wanted nothing to do with me. Until his death he tried tirelessly to support me by discussing my books and references; I still sometimes worry that I haven't shown him enough how grateful I felt his kindness. "

«Hold it up and worth it! He loved your country, his mountains, his freedom. He loved you too, and perhaps most of all when, as a stranger, he felt that his being was not rooted in your nationality, that he was called to set up the image of a freer, higher humanity before you. And despite that love, he never flattered you. Don't forget that either! "