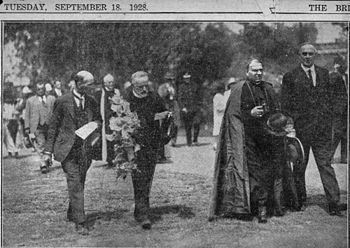 Cardinal Ceretti (in the foreground, 2nd from right) in 1928 as papal legate in Australia , here with the Premier of Queensland, W. McCormack (2nd from left), at Toowong Cemetery in Queensland

Bonaventure Cardinal Cerretti (born June 17, 1872 in Comune de Bardono , Province of Terni , Italy , † May 8, 1933 in Rome ) was a Vatican diplomat and later Curial Cardinal of the Roman Church .

Bonaventura Cerretti received the sacrament of ordination on March 31, 1895 after philosophical and theological studies in Spoleto and Rome . From 1895 to 1899 he worked as a parish chaplain in the diocese of Rome . In 1899 he joined the diplomatic service of the Vatican and was initially employed in the Vatican State Secretariat . From 1904 to 1906 his first assignment abroad took him to Mexico , where he worked as secretary of the Apostolic Delegation. In the years 1906 to 1914 he performed various tasks with the Apostolic Delegation in the USA .

In 1914 Bonaventura Cerretti received the episcopal ordination from Cardinal Rafael Merry del Val y Zulueta and was appointed titular archbishop of Philippopolis in Thracia and apostolic envoy for Australia and New Zealand . In 1917 he became secretary of the Curia for extraordinary ecclesiastical affairs. In 1919 he took part in the peace conference in Paris as the papal special envoy , and in 1921 he became apostolic nuncio in France .

Pope Pius XI accepted him in the consistory of December 14, 1925 as a cardinal priest with the titular church of Santa Cecilia in the college of cardinals . Bonaventura Cerretti represented the Pope as papal legate at the 29th International Eucharistic Congress in Sydney . In 1930 he was appointed archpriest of the Basilica of Santa Maria Maggiore . In 1931 the Pope appointed him Cardinal Prefect of the Supreme Court of the Apostolic Signature and on March 13, 1933 Cardinal Bishop of Velletri .

Bonaventura Cerretti died in Rome on May 8, 1933 and was buried in the Basilica of Santa Maria in Trastevere .