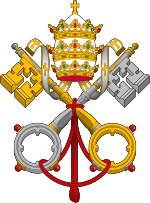 Heraldic emblem of the Holy See : the keys of Peter and the three-crowned tiara

The papal basilica is a comparatively young church title , while the title basilica itself dates back to early Christianity in the 5th century. Pontifical churches, i.e. churches directly subordinate to the Pope (as Pontifex maximus ), have existed for just as long.

In the course of the 20th century, four churches in Italy were explicitly placed under the jurisdiction of the Holy See and named Basilica Pontificia : the Santuario della Beata Vergine del Rosario di Pompei , pilgrimage center for the worship of the rosary and the Marian mission; the International Sanctuaries of Sant'Antonio in Padova (Basilica del Santo) , center of the Antonian world; and the Santa Casa di Loreto with the Marian and Holy Family devotion of Loreto ; also in 1968 the Church of San Nicola a Bari of the Franciscans, which was elevated to a minor basilica in 1951. Three of them are basilicae ab immemorabili (basilicas “from ancient times, from ineffable times”), so they had the title even before the canonization in 1783, Madonna del Rosario was elevated to a minor basilica in 1901 .

In addition, in 1959, San Miguel in Madrid was elevated to a pontifical basilica (basilica minor since 1930) when Opus Dei took over the apostolic nunciature in Madrid.

Among the basilicae minores, the title Basilica pontificia is considered to be the highest in rank.

In 2006 all seven patriarchal basilicas in Rome and Assisi were renamed as Pope Benedict XVI. gave up the title of Patriarch of the West as a symbol of ecumenism and unity of the Church :

San Francesco in Assisi has been called the Papal Basilica since the 18th century; San Lorenzo fuori le Mura since 1889, after the title of Patriarchal Basilica with the re-establishment of the (Latin) Patriarchate of Jerusalem on Ss. Sepulchris , the Church of the Holy Sepulcher in Jerusalem. Since 2006, the other churches have also had the name basilica papale in their official title. The four basilica maiores are referred to as papal basilica or basiliche pontificie .

Occasionally, all basilicae minores are referred to as "papal". Some churches call themselves - without canonical reference - “papal basilica” to express a special proximity to the papacy. These include: