Saint Lawrence Outside the Walls

Saint Laurentius Outside the Walls ( Latin basilica Sancti Laurentii extra muros , Italian San Lorenzo fuori le mura , also San Lorenzo al Verano , also called the venerable basilica ) is a church in Rome . It is a papal minor basilica and is one of the seven pilgrimage churches in Rome. It is consecrated to St. Lawrence and, according to tradition, was originally built by Emperor Constantine . It is also the station church on the 3rd Sunday of Lent.

In 451, with the Council of Chalcedon , it became the Patriarchal Basilica for the Patriarchate of Jerusalem , i.e. the Church of the Patriarch if he was in Rome at the Holy See , and thus one of the main churches of Christianity. In 846 it was sacked by Saracen pirates. The patriarchate itself, which was largely lost in the following centuries due to schisms and counter-patriarchates and which was part of the Eastern Church in multiple claims , was restored for Rome in the Crusades in the Holy Land in 1099 with the Kingdom of Jerusalem . In 1302 it was finally lost and was only given title to San Lorenzo. But because in 1889 the (Latin) Patriarchate of Jerusalem was restored again and the title of the Patriarchal Basilica on Ss. Sepulchris , the Church of the Holy Sepulcher in Jerusalem, this one of the five ancient Roman patriarchal churches is not a major basilica , but only a minor basilica of rank. The church itself retained the title, only from now on as the basilica of the Patriarch of the West , the Pope himself. In 2006, the title of the patriarchal basilica for the Roman churches was finally abandoned and the title of San Lorenzo was changed to the papal basilica .

One of Pope Sixtus III. (432–440) built neighboring Marienkirche was in the 13th century by Honorius III. united with the Laurentius Church, the older church became the choir of the newer one, which forms a colloquial basilica . Sankt Laurentius has been rebuilt and restored several times, most recently until 1948 after severe damage from Allied bombs in 1943, but it has retained the basic features of an early Christian basilica . It is the most famous "burial church" in the city, as the large Campo Verano cemetery adjoins its building . There is a Romanesque cloister behind the church . 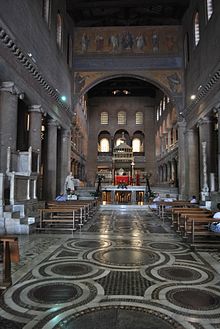 Under a canopy is the altar with a shrine containing the relics of Saint Lawrence and Saint Stephen . Behind it is the sarcophagus of Pope Pius IX. and relics of all who were beatified or canonized under his pontificate .

The organ was built in 1958 by the organ builder Fratelli Ruffatti. The instrument has 35 stops on two manuals and a pedal . The actions are electric.