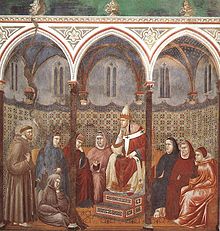 Prologue of the collection of sermons of Pope Honorius III. In 1220 it was sent to the Prior and the Brothers of the Order of Preachers in Bologna. (Bologna, Biblioteca Comunale dell'Archiginnasio, A 925, fol. 1r.)

Honorius was born in Rome around 1148. Its origin from the house of the Savelli is uncertain. Educated in Rome, he became a canon of Santa Maria Maggiore and was Camerlengo (Cardinal Chamberlain of the Holy Roman Church) from 1188 to 1198 . He is the author of the Liber censuum of 1192, a collection of texts, including the eponymous list of tax revenues of the Roman Church. 1193 was Cencio by Pope Celestine III. accepted into the college of cardinals as cardinal of Santi Giovanni e Paolo and was also head of the papal chancellery from 1194 to 1198 . From 1198 to 1216 he was probably treasurer of the Holy College of Cardinals .

On July 18, 1216 he was made pope. As such, he tried the feudal sovereignty over England and the rights of the underage King Henry III. to protect. In 1217 he authorized Christian of Prussia to undertake a crusade against the pagan Prussians and gave him the power to found dioceses and have cathedrals built.

In France , his legate managed to get King Louis VIII to embark on a crusade against the Albigensians in 1226 .

His relationship with the Sicilian and German King Friedrich II was strained by his delaying the promised Orient Crusade and his intervention in diocese occupations in Sicily . Nevertheless, Honorius crowned him emperor on November 22, 1220. The Damiette crusade, which had begun without Friedrich, failed in the Nile Delta in 1221 . On his behalf, a collection of decretals was created, the application of which Honorius made mandatory for the first time. In 1225 in the Treaty of San Germano , Honorius obliged the emperor to begin a crusade by August 1227 at the latest . He did not live to see the failure of the attempt to leave: Honorius died on March 18, 1227 in Rome. He was buried in the church of Santa Maria Maggiore . The tomb no longer exists.

His successor was Pope Gregory IX. , in whose pontificate the tensions between the emperor and the pope reached a new high point.

His great-nephew Giacomo Savelli was one of his successors as Pope Honorius IV from 1285 to 1287.