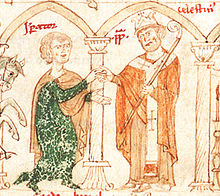 Celestine III. (right) and Heinrich VI. in an illustration from the Liber ad honorem Augusti by Petrus de Ebulo , 1196

Pope Celestine III was born as Giacinto Bobone , also: Jacinto Bobo , Hyacinto Bobo , German Hyazinth Bobo , from the Roman patrician family of the Bobo- Orsini in Rome. He took up a career at the Curia and witnessed papal documents as early as 1121. From 1126 he was prior of the subdeacons at the Lateran Basilica in Rome and thus in an influential position. He sympathized with Pope Innocent II's rival, the antipope Anaclet , but retained his rank in the curia after his death in 1138.

Hyazinth took on the Peter Abelard case in 1141 , presumably supported by Guido von Cittá di Castello, later Pope Celestine II , who, like him, had been a student of Abelard. It is possible that Hyacinth met Abelard and Arnold of Brescia before the Council of Sens in Paris in 1141, or he sided with Abelard directly at the council as a papal observer. Thereby he drew the violent reprimand of Bernhard von Clairvaux on himself.

After the death of Innocent II in 1143, Guido was elected by Cittá di Castello as the new Pope Celestine II, but served only five and a half months. In 1144 Hyacinth Bobo was promoted to cardinal deacon of Santa Maria in Cosmedin , 1154–55 and 1172–74 he traveled to Spain as a legate . Several legacy trips also took him to France. Hyacinth was of a conciliatory attitude towards Emperor Friedrich Barbarossa and also exhorted Thomas Beckett to be lenient towards King Henry II of England .

When he was over 85 years old, Hyacinth was elected Pope on March 30, 1191, probably as a compromise candidate, and took the papal name of Celestine III. on. Although he had been a cardinal for 46 years at this point , he had not been ordained a priest and was merely a deacon . Therefore, he was ordained a priest on April 13, 1191, Holy Saturday, and a day later, on Easter Sunday, a bishop .

The political goals of Emperor Heinrich VI. the aged Pope opposed passive resistance from the start. On the second Easter holiday in 1191, his first official act was the coronation of Heinrich and his wife Konstanze in Rome. He fulfilled the promise of his predecessor Clemens III, who died at the end of March 1191. from the year 1188. Otherwise he stuck to the political line of his predecessor and, as feudal lord of the Norman Kingdom of Sicily, particularly rejected the inheritance of Constance to the kingdom. The usurpation of the Sicilian throne after the sudden death of King Wilhelm II , the nephew of Constance, was at the end of 1189 / beginning of 1190 with the express consent of Pope Clement III. he follows. Celestin III also held the kingdom of Tankred of Lecce . firmly, although according to Sicilian inheritance law Konstanze and her husband Heinrich VI. were the legitimate heirs of the kingdom. After the emperor's first attempt at a military conquest of the kingdom failed in the summer of 1191, the papal curia openly sided with the usurper. In June of the following year, with the conclusion of the Gravina Concordat, King Tankred was recognized as the legitimate successor of the Norman kings. Relations with the imperial court, however, were broken off. After the death of Tankred in 1194 and the conquest of the kingdom by Henry VI in the same year. Celestine III refused. the recognition of a Hohenstaufen rule over Sicily continues. With various offers to the Curia, Heinrich VI tried. in vain to legitimize his rule. Coelestin III opposed these plans to secure the German and Sicilian kingship and possibly also the imperial dignity for the Staufer dynasty. with hesitant but tenacious resistance and refused the emperor the fief of the kingdom until the end. The crusade offered by the emperor in order to be able to come to an agreement with the papal curia could not change this either.

In 1191, Celestine recognized the Teutonic Order , which was founded in 1190 as a hospital order during the third crusade .

Celestine excommunicated Leopold V of Austria in 1194 for the capture of Richard the Lionheart and pronounced the interdict over his lands. Against Henry VI. However, he met no sanctions because Richard had entered into a military alliance with King Tankred against the emperor. In 1194 he also banished King Sverre of Norway .

At the end of 1197, Coelestin voluntarily tried to abdicate in favor of Cardinal Giovanni di San Paolo , whom he favored as his successor , but this was resolutely rejected by oppositional forces in the College of Cardinals . Celestine III. died in Rome on January 8, 1198 and was buried in San Giovanni in Laterano . His grave was lost with the great fire in 1308.