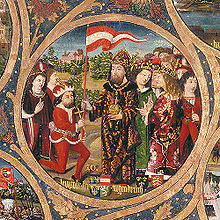 Duke Leopold V (the virtuous), kneeling on the left, receives the red-white-red banner from the German Emperor Heinrich VI after the siege of Acre . (Excerpt from the Babenberger family tree , Klosterneuburg Abbey)

Leopold was the son of Heinrich II. Jasomirgott and Theodora Komnena , a niece of the Byzantine emperor Manuel I.

In 1174 Leopold married the sister of the Hungarian king Bela. In the Hungarian controversy for the throne, Leopold was enfeoffed with the Duchy of Austria at the request of his father in the summer of 1174. When his father died in 1177, Leopold continued his fight against the Duke of Bohemia Soběslav II . After his fall, peace was made with Duke Friedrich (Bedřich) in 1179 and the border between Bohemia and Austria regulated.

In 1182 Leopold made a pilgrimage to Jerusalem and visited the Byzantine Emperor Alexios II Komnenos in Constantinople on the way .

Leopold maintained close contact with Emperor Friedrich I Barbarossa and, for example, participated in his sixth Italian campaign in 1185.

On August 17, 1186 the Georgenberger Handfeste was negotiated, through which Styria and central parts of Upper Austria were connected to Austria after the succession in 1192 . This was the first step towards the creation of the Austria complex.

He went down in history by having the English King Richard the Lionheart captured on his way back from the Third Crusade .

Leopold himself had set out as a crusader with a small contingent by sea from Venice to the Holy Land in August 1190 and had joined the siege of Acre in January 1191 . There he took command of the German crusaders there. Between April and July 1191, the Christian besiegers were reinforced by the armies of the Third Crusade under the French King Philip II August and the English King Richard the Lionheart. They took over command and conquered Acre on July 12, 1191. During the subsequent occupation of the city, Leopold fell out with the English King Richard the Lionheart. Leopold and his German contingent had played only a minor role in the eventual conquest of the city. Nevertheless, Leopold was confident, like the two kings, to hang his Babenberg flag on a castle tower - a gesture with which, although only in the rank of duke, he placed himself on the same level as the two kings and claimed the same share of booty as them . Richard the Lionheart reacted little diplomatically to this, rudely rejected Leopold's claims and had Leopold's flag thrown from the castle tower. After this affront he went home, where he arrived in November or December 1191. However, there are doubts as to whether the incident at Acre took place at all or whether it was invented or hyped up by contemporary chroniclers to justify the arrest of a crusader on his return home, which is strictly prohibited by the church. This is supported by the fact that Richard hardly knowingly went anywhere near the residence of his alleged adversary.

On the journey home to England in 1192, Richard the Lionheart had to take the overland route via Austria with a small entourage disguised as a pilgrim due to adverse circumstances. He appeared in Carinthia and was recognized for the first time in Friesach , and Leopold V ordered the king to be arrested. Richard managed to escape. On December 6th, 1192 Richard was in Bruck an der Mur in Styria where he stood out for his courtly behavior. From there it reached Vienna via the Semmering . On December 21, 1192 he arrived in Erdberg , a suburb of Vienna. When he stopped there, he was recognized and taken prisoner by Leopold's henchmen. The capture had Emperor Heinrich VI. previously arranged to meet the French King Philip August in Milan . Leopold kept Richard prisoner in Dürnstein Castle , then delivered him to Emperor Heinrich VI. out. His share of the immense ransom of six thousand buckets of silver , equivalent to 100,000 marks or 23.3 tons of silver, was used by Leopold to found the mint in Vienna , to build a new and greatly expanded Vienna city wall and to found the cities of Wiener Neustadt and Friedberg .

The capture of the king also put Leopold under enormous political pressure, because as a crusader he was under the special protection of the church. So spoke Pope Celestine III. his excommunication and interdict its lands from. Apparently these were not published. The Pope had the Bishop of Verona set conditions under which the excommunication should be lifted again. These included the release of English hostages and the return of the ransom. In addition, the Duke and his people were to move to the Holy Land as soon as possible and fight there in the service of the Church as long as King Richard was in captivity.

Leopold gave the Cistercians of Heiligenkreuz a cross relic in 1188 ( historicizing representation).

The conditions for lifting the excommunication had not yet been met, neither hostages nor the ransom had been handed over, but preparations for the cruise had already begun when Duke Leopold fell from his horse during a tournament and suffered an open leg. Immediately afterwards he promised the pastor of Hartberg that in the event of his recovery he would fulfill the specified conditions for lifting the excommunication. Shortly afterwards he also declared Archbishop Adalbert III. of Salzburg his submission to the conditions of the Pope. So the excommunication by Archbishop Adalbert III. canceled again. Soon afterwards, on December 31, 1194, Duke Leopold died in Graz of the consequences of his broken leg. He was buried in church in the chapter house of the Heiligenkreuz Abbey.

His white tunic is said to have been red with blood in the fighting during the siege of Acre in 1191 . When he took off his wide belt, a white stripe was visible. Since his banner (presumably black panther on a silver background) was lost during the battle, Emperor Heinrich VI should give him have granted the right to use the red-white-red colors as a new banner. This is how the flag of Austria is said to have come about.

Leopold was the older brother of Duke Heinrich von Mödling .

Children from this marriage:

Through the imperial resolution of Franz Joseph I on February 28, 1863, Leopold V was added to the list of the “most famous warlords and generals of Austria worthy of perpetual emulation”, in whose honor and memory there was also a life-size statue in the general hall of that time The newly established Imperial and Royal Court Weapons Museum (today: Heeresgeschichtliches Museum Wien ) was built. The statue was created in 1872 from Carrara marble by the sculptor Viktor Tilgner and was dedicated by Emperor Franz Joseph himself.