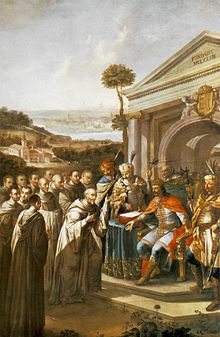 Béla III. was the son of Géza II and Euphrosyne, the daughter of Mstislav I of Kiev. He followed his brother Stephan III. on the Hungarian throne.

The way to the throne

Since the official heir to the throne first Stefan III. was, Béla initially had the role of maintaining contact with the Byzantine Empire . For this, Béla moved to Byzantium , where he was betrothed to Maria , daughter of Emperor Manuel I, and took the name Alexios . In 1165 he was officially appointed heir to the Byzantine throne. Manuel I later had a son, which is why Béla was stripped of his Byzantine heir to the throne and his engagement dissolved.

On March 4, 1172, Stefan was presumably poisoned, after which Béla was asked to ascend the Hungarian throne. Because of his contacts with Byzantium, not all Hungarians stood behind him. Many nobles, including Béla's mother herself, preferred to see Béla's brother Géza on the throne. Béla captured his brother and turned him off. He was not released until 1189 when Emperor Frederick I came to Hungary. Géza joined the crusade under the emperor's leadership.

In 1181 Béla ordered all matters with which he occupied himself to be submitted in writing. That was the beginning of the Hungarian bureaucracy.

In the time of Béla the double cross began to be used, which is also to be seen in today's Hungarian national coat of arms .

During his reign, Hungary entered the Russian Halitsch region intensively , which had already been announced under Béla's predecessors. In 1188, Béla occupied Halitsch completely, drove out Prince Vladimir Yaroslavich and appointed his son Andrew King of Galicia . Shortly afterwards, however, with Polish and German support, Vladimir succeeded in recapturing the principality. In addition, with Bavarian support , Béla took several actions against the Bohemian Duke Wenceslaus II .

After his death, his firstborn son Emmerich succeeded him to the throne of Hungary.

Béla was engaged to Maria Komnene of Byzantium , daughter of Manuel I .

He was married to Agnes de Châtillon (1153–1184), daughter of Renaud de Châtillon , who gave him six children:

In his second marriage he was married to Marguerite Capet , daughter of Louis VII of France.

After his death, Bela was buried in the St. Stephen's Basilica (also known as St. Mary's Basilica) in Stuhlweissenburg , next to his first wife Agnes von Châtillon. In 1543 the city was conquered by the Turks and the basilica - in which the Hungarian rulers had been buried since Stephen the saint - was already plundered at that time. In 1601 the Turks blew up the basilica because they could not hold the city against an advancing Christian army. The royal tombs were forgotten.

The Trinity Chapel with the double sarcophagus of King Bela III. and his wife Agnes von Châtillon in the Matthais church in Budapest.

However, when excavation work began in the remains of the basilica in the late 1830s, a sensational find was made in 1848. Next to the (former) seventh pillar of the basilica, in the so-called “Anjou” chapel, the archaeologist and anthropologist Imre (Emerich) Henszlmann found a splendid intact double grave in which two skeletons were found in two splendid coffins . Based on the intact grave goods that were also present, the skeletons could clearly be identified as those of Bela III. and his first wife Agnes of Châtillon to be identified. The skeletons were then in the Hungarian National Museum until 1862 . At the direction of the palatine they were brought to the Matthias Church in the oven and buried there for the time being in various places in the church. Ultimately, on the instructions of Emperor Franz Joseph (in his capacity as King of Hungary), they were placed in the church's Trinity Chapel; Franz Joseph had the current decoration of the chapel made from funds from his private box. The solemn reburial took place on October 21, 1898 in the presence of the emperor.