The following important information is missing from this article or section:
Sources, literature and evidence for the credibility of all information
Help Wikipedia by researching and pasting it . 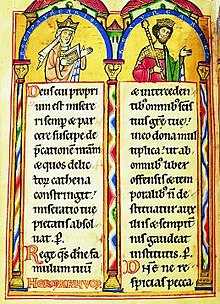 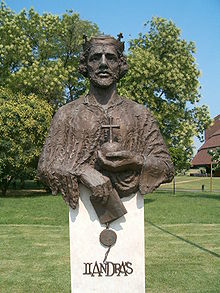 Andreas first achieved political importance when his father installed him there as prince in 1188 shortly after the occupation of the Principality of Halitsch in the Kievan Rus . However, the local prince's son Vladimir Jaroslawitsch recaptured the rule after a short time with Polish and German help.

However, the region remained a focus of Andreas' politics in the years that followed. Again and again he tried to influence the dispute over the succession in the principality. In these attempts, however, Andreas encountered resistance from a large part of the local nobility as well as most of the Hungarian nobles. On the other hand, he received support from the Princely House of Lesser Poland, which was interested in the Volhynian areas of the principality of Halych-Volhynia . In 1205, after the death of Prince Roman von Halitsch-Wolhynien , Andreas referred to himself as King of Galicia and Lodomeria ( Rex Galiciae et Lodomeriae ), but without having any real power.

A direct takeover of power in the territory only succeeded again in 1215 after Andreas' son Koloman Salomea, a daughter of the Polish Grand Duke Leszek I , married. Around the turn of the year 1215/16, Koloman was crowned King of Galicia-Volhynia . The rule of the Catholic Hungarians was never accepted by the Orthodox population and the nobility. The Polish Grand Duke soon broke out of the alliance with Andreas and instead supported a Russian aspirant to rule. In several years of fighting, the Hungarians were driven from the principality.

However, thanks to his marriage policy, Andreas succeeded again in bringing his son Andreas to the ruler's seat of Halitsch in 1227 .

In 1211, Andreas II called the Teutonic Knight Order to the east of the country in order to be supported in the fight against the Cumans . When the order began to establish an independent rule after settling in Burzenland in Transylvania , the relationship with the king quickly deteriorated. In 1225 Andreas forced the order to leave the country again.

In 1213 his wife, Gertrud von Meran-Andechs was murdered during a nobility uprising. The reason for this was the outrage of the Hungarian nobility against the lavish allotment of royal lands to foreign nobles from Gertrude's circle of favorites. In 1206 Andreas had installed Gertrud's brother Berthold as Archbishop of Kalocsa , contrary to church law . In 1212 Berthold was even appointed voivod of Transylvania and the king's deputy. In the following year, the nobility took advantage of Andreas' absence, who was on a campaign in Halitsch in Galicia, to attack the queen's entourage, which was just in honor of Leopold VI. of Austria organized a court hunt in the Pils forest between (today's) Budapest and Gran in the Hungarian low mountain range. Most of the foreign nobles were slain, the queen literally dismembered. Berthold and Leopold were able to save themselves with injuries. After his return, Andreas had numerous conspirators dismembered as well.

This by no means ended the resistance among the nobility: In the spring of 1222, the Hungarian petty nobles forced the king to convene a court day in Stuhlweissenburg , where they forced him to dismiss his government and accept their demands in the form of a golden bull .

The demands were not implemented, but for the first time the small and middle nobility could refer to fixed agreements with the king and did this again and again in the following centuries. Above all, the bull restricted the allocation of lands, customs and other rights to foreigners, guaranteed the nobility judicial immunity, restricted military service and an inheritance largely free of royal influence. In 1223 a similar privilege was granted to the clergy.

On the other hand, Andreas issued another license ( Privilegium Andreanum ) in 1224 , which was addressed to the settlers of mainly German and Walloon origin in Transylvania ( Transylvanian Saxony ) and guaranteed them privileges such as the independent election of pastors and judges. In the years that followed, these privileges extended to other German settlement areas in Hungary and to newly arriving Germans.

Participation in the fifth crusade

Andrew II took part in the Fifth Crusade . On June 1, 1217, he stabbed with Leopold VI. from Austria from the port of Split towards Palestine at sea, where Jerusalem was to be recaptured by the Muslims. In his homeland he was given the nickname Der Hierosolymitaner ("The Jerusalemer"). His journey took him via Cyprus to Acre , from where he operated against the Ayyubid army without any decisive success. After he had to unsuccessfully abandon the siege of a Muslim castle on Mount Tabor in December 1217 , he and his contingent left the crusade early in January 1218 and returned to Hungary. The crusade continued without him to Egypt, where Damiette was conquered after a long siege in 1219 , before the crusaders were defeated in the Nile Delta in 1221.