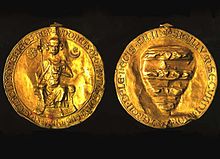 The Golden Bull of Hungary was issued by King Andrew II in 1222 . The laws established the basic rights of the nobles, including the right to disregard the royal will if it was illegal. (ius resistendi, Article 31)

The bull guaranteed the tax exemption of the nobles and the church (Article 3); the nobles could not, with the exception of the case of defense, be compelled to go to war or to finance it (Article 7).

The bull was made in seven copies: for the Pope , for the Knights Templar , for the Order of Malta , for the King himself, for the two Archbishop's chairs in Esztergom and Kalocsa and for the Palatine of Hungary .

The battles between the king and the nobility on the one hand and between the individual members of the royal family on the other reached their climax during the reign of Andrew II. The king recklessly distributed his lands to the nobles, whereby their power grew steadily, while the king's sources of income decreased to the same extent .

The growing power of the nobility also endangered the owners of only small or medium-sized estates. King Andrew and his son, who later became Béla IV , could only rely on the support of the lower and middle nobility in their fight against the high aristocracy. King Andreas therefore called a parliament together in 1222, which agreed the cornerstones of the Golden Bull, a letter of freedom that was the basis of the Hungarian constitution until 1848.

The bull was completed and confirmed by King Ludwig I in 1351 , Queen Maria in 1384 and King Matthias in 1464 . The resistance clause contained until then was abolished in 1687 at the request of the then ruling dynasty of Hungary, the Habsburgs , which was a sign of the gratitude of the Hungarian nobility for the fact that the Austrian army helped drive out the Turkish armies occupying Hungary .

Today only a copy of the bull from 1381 has survived. It is kept in the archbishopric archives of Esztergom.