The area is said to have got its name from the legendary, long-lost city of Wolin, which once lay west of the bow near Wolodymyr-Wolynskyj and was the headquarters of the East Slavic tribe of the Wolhynians .

The “Lodomeria” in the name of the Austrian crown land Galicia and Lodomeria goes back to Volhynia. However, Volhynia was never under Austrian rule - the name was simply taken from the Hungarian royal statute, as Hungary claimed sovereignty over the area in the late Middle Ages.

The land is bounded in the west by the Bug , but the expression "Waldwolhynien" was common for the area immediately to the west. The northern part is flat and criss-crossed with forests and swamps; in the south there are individual hilly foothills of the Carpathian Mountains. The most important river is the Pripyat , which only rises here, otherwise some of its tributaries run in the area, such as the Styr , Horyn or Slutsch . Important cities are Kovel , Lutsk , Novovolynsk , Rivne , Kremenez , Dubno , Sarny , Nowohrad-Wolynskyj , Korosten and Wolodymyr-Wolynskyj . Zhytomyr lies on the eastern edge of the landscape .

Volhynia is part of a possible original homeland of the Eastern Slavs and is the original tribal area of ​​the Volhynians , whose center was the now-destroyed Wolyn Castle . From the 9th century the region was part of the Kievan Rus , the cities of Halych and Vladimir-Volynsk were important centers of the empire.

With the death of Yaroslav in 1054, the Russian confederation of city-states was divided. The territory Yaroslav (1019-1054), the Kiev Empire, was among his five sons divided . One of these principalities was Volyn, the capital was Vladimir-Volynsk.

The division, however, leads to a weakening of the Rus' domination and isolation in Europe. The succession to the Kiev princely chair was regulated according to the seniority principle . This meant that the senior of the dynasty was always in charge. When the Kiev Grand Duke died, the younger brothers always had to move in, which led to constant fratricidal wars since 1068.

The Diocese of Vladimir was founded from Kiev in 1078, and in 1156 the Diocese of Halych (later Galicia) was separated from him.

In the 12th century, Volhynia was under the rule of the Rurikids . The history of the Principality of Galicia-Volhynia forms an important link between the Kiev Empire and the later history of Ukraine . In the newly connected Principality of Galicia-Volhynia, in the southern border region of the Kiev Empire, a number of peculiarities developed that remained for a long time in the history of Ukraine.

Like many principalities of the Eastern Slavs, the principality was under Mongolian rule, but much more loosely than in the northeast. At the same time, close relations were maintained with the countries of Central Europe. However, this also meant constant conflicts with Poland and Hungary , on the other hand there were intensive trade connections and consultations in politics and culture.

As princes of Volhynia ruled:

In 1188 Volhynia was united with Halych and henceforth ruled by the princes of Galicia-Volhynia .

1215–1264 Danilo was Prince of Galicia and Volhynia. Under his rule the principality reached the height of its power. In 1253 he was crowned King of the Rus (rex Russiae) by a papal envoy. With the appointment of Danilos as king, Pope Innocent IV intended to consolidate his power in the region, which was combined with a church union and a crusade against the Mongols , which failed, however, and the country made tribute to the Mongols. The desired church union lasted only a few days.

However, there were still connections to Kiev. At the beginning of the 14th century, the metropolitan moved his seat from Kiev to Vladimir in the northeast of the Kievan Rus. Then Danilo's grandson was allowed to found an independent metropolis ( diocese ) in Halych with the permission of the Patriarch of Constantinople .

Inner structure of the Principality of Galicia-Volhynia

In the Principality of Galicia-Volhynia there were considerable contrasts to the Kievan Rus. For one thing, the cities remained an important factor here; in connection with the Pax Mongolica, trade between East and West experienced a further significant boom.

The cities of Galicia and Volhynia played an important role and participated in the upswing. Among the new foundations, Cholm (Polish: Chełm) and Lemberg ( Lviv ) were the most important. Just like Polish and Hungarian rulers, Danilo and his successors also called German merchants and craftsmen into the country, who very early made up a significant part of the urban upper class.

Eastern Slavs and Armenians moved west from the areas near the steppes , so that some cities of the principality were inhabited by several ethnic-religious groups .

The socio-political structure of the Principality of Halych in the 12th century was as little oriented towards the prince as in Vladimir-Suzdal and Volhynia. The East Slavic boyars , the nobility, were more involved in the rule here, which is likely to be related to regional roots and influences from Poland and Hungary. This sized element, which limited central authority had, however, affect the political disintegration of Galicia and Volhynia.

Part of Lithuania and Poland

In the course of the first half of the 14th century, the areas became an object of contention for their western neighbors. In 1323 the ruling dynasty died out and the nephew of the last prince, Bolesław of Mazovia , became ruler of Galicia-Volhynia . He was related to both the Polish and the Lithuanian ruling families. When Bolesław of Mazovia was poisoned by his boyars in 1340 for allegedly favoring Catholics, a battle broke out between the two emerging Eastern European great powers over the legacy of Galicia-Volhynia. After longer wars, with varying degrees of success, most of the principality of Halych and Cholm fell to Poland; Volhynia, Podlasie and some other areas fell to Lithuania.

The integration of the Ukrainian countries into the Grand Duchy of Lithuania took place more slowly than the integration of Galicia into the Kingdom of Poland . However, the year of the Polish-Lithuanian Union (1385/1386) marked a turning point for Volhynia.

The Lithuanian Grand Duke Jagajlo married Hedwig , heir to the throne , ascended the Polish royal throne and accepted the Roman Catholic faith. For the Lithuanians this meant accepting the faith of the Roman Christians, but the Eastern Slavs (and thus also the Volhynen) did not have to give up their orthodoxy. Jagajlo conquered Galicia back from the Hungarians in 1387 and was able to decisively repel the Teutonic Order near Tannenberg in 1410 .

The Polish-Lithuanian Union of 1385/86 did not mean the fall of the Grand Duchy of Lithuania , to which Volhynia belonged; it remained an independent great power well into the 15th century. Under Grand Duke Vytautas (1392–1430) Lithuania experienced a high point in its power development. Vytautas tried to consolidate his central power and to integrate the Ukrainian principalities and thus also Volhynia more strongly. The administrative integration of Volhynia continued his successors, but in the religious and cultural area the traditional tolerance remained.

In the Grand Duchy of Lithuania, the privileges of the Polish nobility were initially only transferred to Catholics, so that many Orthodox nobles converted. This political pressure to convert was particularly evident in Lithuania, but in the Ukrainian principalities and Volhynia the nobility was able to hold a broad stratum of Eastern Slavic Orthodox until the middle of the 16th century. In 1529 these complicated rights and privileges of the individual estates in the Grand Duchy of Lithuania could be fixed. The statute linked western and eastern Slavic elements and its main features remained in force well into the 19th century.

From 1569 Volhynia belonged to the Polish-Lithuanian state, the Wolhynia Voivodeship ( Wołyń ) was created with the capital in Lutsk ( Łuck ), which was to last until 1795. 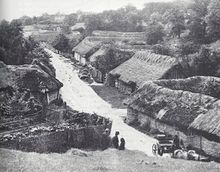 The release of the serfs by the Russian Tsar in 1861 caused Volhynia to experience a sudden labor shortage. Many owners could no longer pay their labor and sold their land. The settlement of Germans received massive support. Two German colonies were founded in 1797 and 1816 respectively. From 1862 to 1864, but also until the 1890s, Germans poured into the country. In 1914 there were around 250,000 Wolhynian Germans living in the country. In addition, 16,000 Czechs were settled in the border area with Russia by the Austro-Hungarian government . The Volhynian Czechs brought the hops into the country. Until 1945 they were a minority. 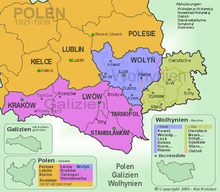 Galicia and Volhynia in the interwar period

During the First World War, from July 5 to 15, 1915, all of the approximately 240,000 Germans were forcibly evacuated from this area, with the exception of those families who were members of the Russian army. Most of them were deported to Siberia. In 1918 the residents were allowed to return. Around 120,000 residents had returned to Volhynia by 1924. As a result of an offensive by the Central Powers , fighting broke out in Volhynia. The new front line ran in a south-north direction from Bukovina ( Chernivtsi, Austria ) through Eastern Galicia and Volhynia ( Tarnopil, Russian , Dubno, Austria ) via Pinsk , Baranowitschi (now Belarus ) (both German ), Smorgon , Dvinsk ( both russ. ), the Düna down to the Gulf of Riga .

In 1921 Volhynia was divided between Poland (western part) and Soviet Ukraine (east). A Volyn Voivodeship was established again.

As a result of the division of Poland in the secret additional protocol of the Hitler-Stalin Pact , Volhynia became Soviet territory from September 1939. Most of the resident German population in the former Polish part was relocated to the Reichsgau Wartheland in 1939 with the Heim ins Reich campaign . This group comprised about 65,000 people. The practical implementation was carried out by the Volksdeutsche Mittelstelle ( VoMi ), an SS organization .

When Volhynia was occupied by the Wehrmacht in World War II in 1941 , massacres of the Jewish inhabitants took place. From July 11, 1943, under the eyes of the German occupation, Ukrainian nationalists began to systematically murder the Polish civilian population in countless massacres , initially in Pawliwka . The Volhynian Czech minority was also affected by massacres by German units, for example on July 13, 1943 in Český Malín .

After the end of the Second World War, the entire Volhynia fell to the Soviet Union and the surviving Poles were expelled.

Since 1992 Volyn belongs mostly to Ukraine , which is in the administrative units of the Oblast Volyn , the Rivne Oblast and Oblast Zhytomyr is divided, and to a lesser extent to Belarus .

Between 1946 and 1949, 73 Wolhynian German families came to Linstow in Mecklenburg . They built their traditional thatched wooden houses, most of which were later converted. One of these old houses has housed the Volyn Resettlers Museum since 1993 . Every year, Volhyn Germans meet in Linstow.

Volhynian fever , a bacterial infection that is transmitted by parasites, was named after this region .

Places and cities of the historical Volyn landscape