This article deals with the title of nobility. For the Russian cruiser, see Boyarin . For the Czech writer, see Pavel Bojar . 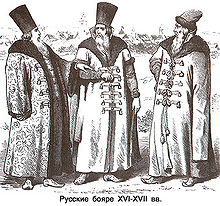 The title was widespread in Bulgaria , in Kievan Rus , in ancient Russia , in the Grand Duchy of Lithuania (today Belarus , Ukraine , Russia and Lithuania ), in the principalities of Wallachia (today Romania ) and Moldova (today Republic of Moldova and Romania) as well as in Serbia . The boyars formed the ruling class of large landowners in these countries partly from the 8th century and in Romania partly until 1945.

The etymology of the word is unclear, but it is probably of Turkish origin, especially since it most likely came from the Bulgarians on the Danube to the Rus. There the members of the upper class of society were called Boljarin (plural Boljari ). Afterwards the word penetrated into Old Russian as a learned term. The historical root of boyarism everywhere was feudal allegiance.

Max Vasmer holds a derivation from Old Turkish among all dubious theories . bai 'rich, noble' + är 'human, man' under the influence of slav. bol- 'better, more' for most likely.

The oldest Slavic form of the concept Bojar, Boljarin (болярин), was dated early 10th century and the First Bulgarian Empire associated. It is believed that it was transformed into Boilar or Biljar from the native Bulgarian nobility title Boil, as the aristocracy in the empire called itself . To support this theory, the work De Administrando Imperio by the Byzantine emperor Constantine VII is used, in which the Bulgarian nobles with the title Boliades are mentioned. From Bulgaria the term Boljaren spread to Serbia, Moldova, Rus and Bosnia.

In the First Bulgarian Empire the members of the highest social class were called Boil until Christianization in the 9th century , afterwards and during the Second Bulgarian Empire Boljar or Boljarin . Boljar and Boil were hereditary titles.

During the First Bulgarian Empire, the Boilen (later Boljars) divided into veliki (large) and mali (small). In addition to the title of boila , the position that the nobleman occupied in the empire was often added. For example, the Ichirgu-Boil was the administrator of the capital and commander of the capital's garrison , Kawkhan Boil - Supreme Commander of the Armed Forces and First Diplomat or Logothetes Boil  - similar to today's State Secretary . The work De Administrando Imperio mentions that during the reign of Tsar Simeon I in the Bulgarian Empire there were six Great Boilas who belonged to the Council of Great Boilas . The council made important decisions, advised the ruler or ran the country when the rulers were still minors. In the latter case, a Supreme Boil was mentioned who ruled the country in the name of the young ruler and often waged wars, such as Vice Khan Isbul during his reign of Khan Malamir and Khan Presian I.

The Boljar Supreme Council was an important body also during the Second Bulgarian Empire. In the empire, which was recognized by Byzantium in 1187 after an uprising by the Boljar brothers Assen, Theodor Petar and Kalojan, political and military power was concentrated in a few Boljar families. The most powerful of them appeared as pretenders to the throne, intrigued against the tsars or allied themselves, had the tsars murdered ( Iwan Assen I , Theoder Petar , Kalojan etc.) or overthrown in order to make themselves tsar ( Boril , Iwanko , Mizo Assen , Konstantin Tich Assen etc.). The most important Boljar families were the Assen house , the Schischman house, the Komitopuli house and the Terter house . Powerful Boljars often split off with part of the country, such as Stres , Balica , Rostislaw , Jacob Swetoslaw , Smilez , Alexius Slaw etc.

The many small Bulgarian principalities that took the place of the Bulgarian Empire in the 14th century (see Despotate Dobrudscha , Kingdom of Vidin ) and for the most part fought among themselves, made it easier for the new power in the Balkans to conquer. With the fall of the Bulgarian Empire under Ottoman-Turkish rule in 1396, the title and privileges of the Boljar system in Bulgaria also disappeared.

The title of Boier in Romania had the highest aristocratic rank, they were only below Voievod or Domnitor and formed the class of large landowners (moșieri). They were most important in the Danube principalities (Wallachia and Moldavia) from the 10th to the 18th century. They were originally elected to this office and had to be confirmed by the ruling prince. In the Middle Ages, the Boieri formed the ruling class who took over the judiciary and administration in rural areas and held the most important offices in administration and the military at the royal court. With the help of the boyar parliaments of Wallachia and Moldova created by the Organic Regulations in 1829 , they exercised power over the Danube principalities until 1856. In Romania's parliament they formed the Conservative Party from 1862, which, in contrast to the (National) Liberal Party (“Reds”), was called “White”. After the victory of the Liberals, the Conservative Party disintegrated, and it was succeeded by the Peasant Party (Partidul Țărănesc).

In Transylvania , on the other hand , the Boieri lost their importance and became simple peasants, unless they were absorbed by the Hungarian nobility.

Boyars in the Rus

In the Kievan Rus the boyar class had increased in the 8th – 9th It was originally developed in the 19th century from the Druzhinas , the bodyguards of the princes, who in turn had been recruited from the Varangian oath communities. They were first documented in the Nestor Chronicle of 862 in the immediate vicinity of Prince Rurik . However, it is unclear whether the term was in use in Rus to designate a specific social class before the mid-12th century. In later times the boyars had different social and political positions in different parts of Russia. In the northeast they formed the highest and most influential social class in the vicinity of the prince, in the southwest the low landowning nobility. During this time the boyar assembly, the so-called boyar duma, was formed , which a grand duke could convene . He could also seek advice from a boyar council .

Tsar Ivan IV had many boyars killed or deported in the 16th century after they had conspired against him, fearing for their privileges. Peter I finally abolished the boyar class as part of his reforms at the beginning of the 18th century.

Boyars in the Grand Duchy of Lithuania

When the Lithuanians conquered most of the former empire of Kiev in the 14th century, they found a layer of landowners, mostly city-dwelling boyars, in addition to the partial princes who submitted to their sovereignty. They left their property and legal position to the boyars. Soon the Lithuanian nobles were called boyars (Lithuanian bajorai , in Latin sources also baiores , bojari or bojare ).