The title of this article is ambiguous. For further meanings see Voivode (disambiguation) . For the Kosovar-Belgian football player, see Mërgim Vojvoda . 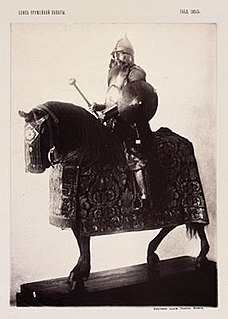 Voivode is a Slavic military leader or ruler title. In Poland today it designates the highest head of administration in a voivodeship .

The term voivodeship is derived from voivode. The Banat region , which is now part of Serbia , Hungary and Romania , used to be called the Serbian Voivodeship in the German language . The name Vojvodina , a region of Serbia, is also derived.

The term "voivode" generally referred to a military leader and was used in particular for a Slavic nobility rank below a prince ( Knjaz ) or for a military governor, comparable to the title of a Germanic duke . On the military border with the Ottoman Empire , the voivode was in command of a 50-man division of conscripts who were recruited from the border population. Such a unit was called a "voivodeship".

The title Voivode was used in Pomerania , on Rügen , in Poland , Bosnia , Serbia , Croatia , Bulgaria , North Macedonia , Russia , Belarus , Ukraine , also the principalities of Moldova and Wallachia and in Hungary (spelling Vajda ) and Austria . In the Danube principalities of Moldavia and Wallachia , the official designation of the princes there was Voievod, Gospodar and later Domnitor . In Bulgaria and Macedonia the leaders of the Heidukes and Chetniks were also referred to as Vojwoda. In Austria-Hungary the Emperor of Austria carried the title of Grand Voivode of the Voivodeship of Serbia .

In the Russian Empire was Wojewoda (воевода) until the reforms of Peter the Great , a military title. Each city had one or more voivodas who directed its military garrison. There were also voivodas in the field (полевые воеводы), who led various parts of the army.

Today's usage in the Republic of Poland

In Poland, the title voivode ( Polish wojewoda ) has been used since the late Middle Ages to designate the highest head of administration in a voivodeship , that is, the highest administrative district.

The voivode is the representative of the Council of Ministers in the voivodeship, the superior of the integrated government administration and exercises the function of the supervisory body over the units of the territorial self-government. He is appointed by the Polish Prime Minister.