Vladimir (also Vladimir , Russian Влади́мир ) is a city in Russia and the capital of Vladimir Oblast . It is located some 190 kilometers east of Moscow on the River Klyazma and has 345,373 inhabitants (October 14, 2010). As the capital of the Grand Duchy of Vladimir-Suzdal , the city played an important role in Russian history as an important center of culture and power before the Mongol invasion of the Rus and as the temporary seat of the Metropolitan of the Russian Orthodox Church . The Moscow grand dukes and tsars held Vladimir in front of Moscow in their titles for several centuries.

Sungir is an archaeological site on the outskirts of Vladimir, which became famous for three particularly richly decorated tombs from the Upper Paleolithic. Among the remains of a total of eight Cro-Magnon people, three graves with grave goods that are unique for this period emerge.

The Hypatius Chronicle already mentions the year 990 as the year of the founding of Vladimir by the Kiev prince Vladimir Svyatoslavich . However, the official founding year is the year 1108, in which the Prince of Chernigov Vladimir Monomakh fortified the city. Monomach's grandson Andrei Bogoljubski moved the seat of the Grand Duke from Suzdal to Vladimir around 50 years later .

During the following years up to the conquest and devastation by the Tatars on February 7th, 1238, the city experienced its heyday. In 1238 the Principality of Vladimir was conquered by the troops of the Golden Horde under the leadership of Batu Khan , after the latter took over the Russian forces under Yuri II Vsevolodovich , the Grand Duke of the Principality of Vladimir-Suzdal and uncle of Alexander Nevsky , on the Sit , a tributary of the Mologa , defeated in the Battle of Sit . Urban development was permanently interrupted and many handicraft traditions were lost. Nevertheless, during the reign of Alexander Nevsky (1252–1263), Vladimir retained his political supremacy among the cities of the Rus. 1299–1317 was the seat of the Metropolitan in Vladimir . The importance of Vladimir finally declined when, in 1328, the Grand Duke of Vladimir Ivan Kalita made Moscow the new capital of Russia and thus of the Grand Duchy of Vladimir. It was only in the 18th century that the city experienced an upswing after becoming provincial capital in 1719. In 1861 Vladimir received a railway connection on the newly opened line from Moscow to Nizhny Novgorod . Vladimir was the capital of the Vladimir Governorate from 1796 to 1929 . Between 1929 and 1944 it belonged to Ivanovo Oblast (referred to as the Ivanovo Industrial Oblast until 1936 ). In 1944 the Vladimir Oblast was formed.

The Vladimirovka , the prison was in, since the time of Catherine II. In operation. After the Stalinist era , it served as a prison for dissidents.

Monument in honor of the 850th anniversary of the city of Vladimir, Russia. 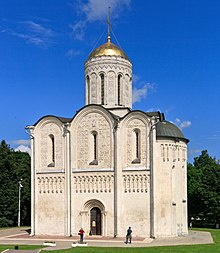 Unlike most of the other major cities in western Russia, Vladimir is not dominated by industry; the most important branch of the economy is tourism. The most important sights include the Assumption Cathedral from 1157 to 1160, the Golden Gate , an old city gate, the Demetrius Church from 1194 to 1197 as the last testimony to the princely residence, the Princesses Monastery, also with the remains of a castle. Not far from the city are the Bogoljubowo Monastery and the famous Church of the Protection and Intercession of the Virgin Mary on the Nerl from 1165, which Andrei Bogoljubski had built in just one summer in memory of his son Isjaslav. There are also a number of other churches, monasteries and secular buildings.

Two works by Andrei Rublev are of particular art historical importance : a fresco depicting the Last Judgment and his icon Vladimirskaya . The representation of the Last Judgment can be found in the back of the Assumption Cathedral. In contrast to most of the other depictions of the Last Judgment, there are no saved and damned people, only saved ones - undoubtedly an expression of Rublev's theological convictions. The fresco is in need of renovation. Rublev's icon of Our Lady of Vladimir can be found in the museum next to the cathedral. It is an adapted copy of the famous Mother of God of Vladimir , brought from Kiev to Vladimir and from Vladimir to Moscow .

The Dormition Cathedral , the Golden Gate and Demetrius Church belong since 1992 to UNESCO - World Heritage " White Monuments of Vladimir and Suzdal ."

In Vladimir, local public transport is handled by buses. There are also several trolleybus routes in the city. A bus ride costs 14 rubles. There is a regular bus connection with Moscow, but the journey time is often well over four hours. A bus ticket from Vladimir to Moscow costs 280 rubles.

There is also a direct train connection to Moscow (travel time approx. 2.5 hours) to the Kursk train station . Long-distance trains from Eastern Russia also stop in Vladimir and end in Moscow at the Yaroslavl station . The ICE (Velaro Rus, Sapsan ) modified for Russia runs twice a day from Vladimir to Moscow. A train ticket costs 350-550 rubles, depending on the class. In the 20th century Vladimir was on the Meschtschorskaja Mainline called narrow-gauge railway with Ryazan connected.

Vladimir is located on the M7 trunk road , which is part of European route 22 and forms an important east-west link within Russia. The locals call the bypass Pekinka ( German:  Peking ), as it was once supposed to be part of a trunk road from Moscow to Beijing . As a consequence of the worsening crisis in Sino-Soviet relations , this plan was rejected.

Vladimirsky Traktorny Zavod , a tractor and engine manufacturer, was founded in the city in 1943 . Today the plant belongs to the Traktornye Sawody concern .

Vladimir has partnerships with the following cities:

Old building of the pedagogical college

In Wladimir there was a POW camp 190 for German prisoners of war of the Second World War .