Mongol invasion of the Rus

Mongol invasion of Vladimir in 1237

The Mongolian invasion of Rus ( Russian Монгольское нашествие на Русь , also Russian Наше́ствие Баты́я "Batu invasion") denotes the submission of the Russian principalities ( Rus ) by the troops of Batu Khan in the years 1237 to 1240. The campaign of Genghis Khan's grandson, also known as the Mongol Storm , led in the first two years to northeastern Russia, where important cities such as Suzdal , Vladimir and Ryazan were conquered. In the second phase it led to southwestern Russia and was marked by the destruction of Chernigov , Pereyaslav and, most recently, Kiev .

In 1223 the Mongol generals J̌ebe Noyan and Sube'etai Ba'atur penetrated from Georgia, across the Kipchak steppe, into the territory of the Rus. In the course of Genghis Khan's campaign against the Khorezmian Empire , they had previously pursued Khorezmshah Muhammad II from Khorasan across the Khorezmian Empire to the south of the Caspian Sea, where he died at the end of 1220. Then they devastated large parts of Azerbaijan and Arrāns and crossed Georgia, where they defeated an army under Giorgi IV. Lascha in 1221 . J̌ebe and Sube'etai moved north via Derbent, crossed the Caucasus and on its north side defeated an army of Kipchaks and Alans that had been waiting for them there. Parts of the surviving Kipchaks under Kötan Khan fled to the Rus area and asked for military help against the invaders. The princes Mstislav von Kiev (r. 1214-1223), Mstislaw II. Von Tschernigow (r. 1220-1223) and Mstislav Mstislavich von Halitsch (r. 1221-1227) concluded an alliance with Kötan Khan and mobilized their troops. J̌ebe and Sube'etai had followed the Kipchaks, and in May 1223 the famous battle of the Kalka took place in what is now Ukraine . Since Mstislaw, Mstislaw II. And Mstislaw Mstislawitsch, because of their rivalries, led their armies separately and did not coordinate the troop movements, the outnumbered Mongols managed to win the battle without difficulty. The Rus troops were almost completely wiped out, Mstislaw and Mstislaw II were killed, only Mstislaw Mstislavich and Koethan Khan managed to escape. The Mongols did not pursue the refugees. J̌ebe was probably killed in the run-up to the battle and Sube'etai moved east and returned to Mongolia via the Volga Bulgarians . Genghis Khan's orders were not for conquest, only for exploration of the areas west of the Caspian Sea, and so the Mongols disappeared, after this first military encounter with European troops, as suddenly as they had appeared. 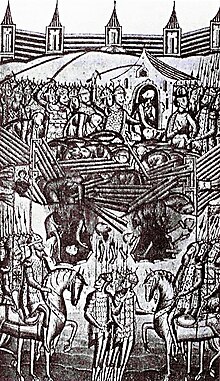 In 1237, Batu Khan led the Mongols back to Eastern Rus. Mongol troops invaded the Rus and fought down any resistance. On their march north, the Mongols looted and destroyed most of the large cities in the Ryazan , Vladimir and Suzdal areas . After the capture of Ryazan, the warriors of Evpati Kolovrat offered bitter resistance for a while before the Mongols moved on. In the Battle of Sit in 1238, the troops of the northeastern Russian princes were decisively defeated. Of the 72 Russian cities known from the annals, 49 were destroyed by the Mongols.

Many chroniclers describe the brutality of the Mongolian warfare . For example, the attackers used the kharasch tactic to drive a number of subjugated villagers as a kind of “living protective shield” in order to protect themselves from counter-attacks. But despite the horrors of those years, estimates that more than half of the then population of Rus perished in the Mongol storm are exaggerated. In contrast, a population loss of up to 10 percent is assumed for the years from 1237 to 1240, which is still a high value.

The Mongols broke off their advance on Novgorod due to the weather that made the roads impassable and instead turned south. The small town of Koselsk , which the Mongolian army detained for almost two months, offered particularly stubborn resistance . After they were captured, all residents were massacred there. The campaign through the southern principalities was marked by the capture of numerous cities and reached its climax with the capture of Kiev in 1240. Then the Mongolian army marched west, towards Poland .

In 1242 Batu established his capital Sarai on the lower reaches of the Volga not far from today's Volgograd and founded the khanate, which became known as the Golden Horde . A not insignificant part of the income of the Golden Horde consisted of tributes from subjugated peoples. For the year 1257 tax counters (čislenicy) are mentioned in the Russian areas who “rode through the streets and wrote down the Christian houses” in the name of Möngke Khan . As part of the Mongolian Empire , a tenth of the tax revenue of the Golden Horde had to be delivered to the respective Great Khan .

Trade routes of Venice and Genoa

On the one hand, Mongol rule isolated the Rus from other European countries for more than three centuries; on the other hand, the conditions within the Mongolian Empire favored the so-called Pax Mongolica and a cultural and economic axis formed across Asia. For the first time, this allowed efficient trade relations between regions as far apart as the Baltic States , Italy, the Middle East, India and China. The trade via the Crimea to Egypt was particularly pronounced and can only be compared with the trade relations with the Italians , here especially Genoa and Venice . The Genoese owned z. B. 14 trading cities in the area of ​​the Golden Horde. The Mongols sold their booty to the Genoese, including Russian slaves. There was also trade by land via Kiev and along the rivers to the north. Merchants from Wroclaw , Greater Novgorod and Riga brought goods to Central Europe . The Mongolian income in this context came on the one hand from the trade itself, but also from tributes for the bases of the Genoese and Venetians as well as from tariffs of 5% (4% for Genoese and Venetians).

At first, cultural life and urban development in the areas dominated by the Mongols had almost completely come to a standstill - stone construction came to a standstill for a hundred years - and large parts of the local population fled to the northeast, in forest regions with partly poor climates and poor ones Floors. However, it was not in the interests of the Mongols to shut down any independent political and cultural life of the Russian population. Rather, they allowed the Russian princes to administer their countries themselves, but these remained in a subordinate role to the Mongol rulers and paid tribute. The Mongols played the feuds of the individual princes skilfully against one another and carried out devastating punitive campaigns in the event of disobedience or a prince gaining too much power.

Commons : Mongol Invasion of the Rus  - Collection of pictures, videos and audio files