Stalingrad is a redirect to this article. Further meanings are listed under Stalingrad (disambiguation) .

The title of this article is ambiguous. Further meanings are listed under Volgograd (disambiguation) .

The city ​​went down in world history as the site of the Battle of Stalingrad in World War II .

Volgograd is located almost 1000 km southeast of Moscow on the western bank of the Volga , around 400 km north of the mouth of the river into the Caspian Sea . The city extends over 60 km along the banks of the Volga in a width of up to 10 km.

The city district Volgograd also included next to the city of Volgograd to 2009 settlements of urban type Gorkowski (16,436 inhabitants), Gumrak (6053), Wodstroi (4483) and Youzhny (1914) and 18 villages with a total of 6,286 inhabitants (calculated as of 1 January 2009) . These localities were incorporated in March 2009, so that the city of Volgograd is now the only locality in the urban district and, as in the 1990s, its population is slightly above one million despite a continued decline .

The area around Volgograd was an important trade route in ancient times due to its geographical location on the isthmus between the Volga and Don . Here settled in the 5th century BC. BC Scythians . In the 8th and 9th centuries the area belonged to the empire of the Khazars , in the 11th and 12th centuries various tribes and hordes stayed here, including the Polovcians or the Golden Horde , which was about 50 km east of Volgograd, on the river Akhtuba , built one of its centers with the city of Znamensk and ruled Volgograd since the Mongol storm in the 13th century. The beginnings of the Russian Volgograd are not illuminated in detail. The official founding date is July 2, 1589, when the city was founded as a fortress to protect Russia from the nomads from the south. The city's first name was Tsaritsyn, derived from the nearby tributary of the Volga.

The facility, made of wood, was initially located on a now defunct Volga island opposite the mouth of the river Zariza (from Tatar sari su "yellow water"). After a fire it was moved to the right bank of the Volga. The first stone building was built in 1664. In the 17th and 18th centuries, the town, which had a few hundred inhabitants, was besieged and captured several times by rebellious Cossacks: in 1670 under Stenka Razin and in 1774 under Jemeljan Pugachev . After the conquest of the Crimea and the Kuban region in 1783, Tsaritsyn lost its strategic military importance and gradually developed into a commercial and economic center. Above all, the construction of the railway line to Kalach on Don in 1862 and to Gryazi in 1872 led to an economic upswing and made Tsaritsyn a hub for oil supplies and transport links from the Caspian Sea to the Black Sea and from the Caucasus to central Russia . As a result, large-scale industry also settled here, including metal and wood processing companies, oil refineries for the crude oil from Baku , several mills and tanneries.

Renaming in honor of Stalin

During the Russian Civil War of 1917–1920 there was heavy fighting here, because the city was at the crossroads of transport routes for food from the south of the country to Moscow and Petrograd . On April 10, 1925, it was renamed Stalingrad ("Stalin City") in honor of Josef Stalin , who had served as army commissioner here during the civil war .

During the German-Soviet War , Stalingrad was one of the targets of the “ Fall Blau ” offensive and was encircled on three sides by over 230,000 soldiers of the German 6th Army in late summer 1942 in the Battle of Stalingrad . The fighting began on August 23, 1942, u. a. with a massive bombing of the city by the air force . The fighting reached downtown in September, with several key points (including the Central Station and Mamayev Hill ) switching hands several times. The defending troops of the Red Army could only get their supplies from the unoccupied east bank of the Volga by ships. The tactical goal of the Wehrmacht was, by taking the city, the shipping traffic on the Volga, over the u. a. Allied aid supplies were transported from the Persian Corridor and the Caspian Sea to northern and central Russia.

Ruins of a workshop in the “Red October” steelworks, January 1943

At the beginning of November the Wehrmacht had captured 90 percent of the city area. However, the complete conquest of the city did not succeed due to the continued resistance of the Red Army, although Hitler in his speech on November 8, 1942 described the battle as largely won. Instead, the German troops and their allies (especially Romanians and Croats) were surrounded by the Soviet counter-offensive " Operation Uranus " on November 19, 1942 . A German attempt at relief with the " Winter Storm Company " failed. On February 2, 1943, the remnants of the Sixth Army under General Field Marshal Friedrich Paulus stopped fighting. Around 108,000 German and allied soldiers were taken prisoner. During the fighting, the city was almost completely destroyed. Reconstruction began immediately after the liberation in February 1943. In the same year, the town twinning with the English Coventry was closed. In 1945 the city was given the official title of City of Heroes by the leadership of the Soviet Union.

As part of the de-Stalinization , the name of the city was changed to Volgograd on November 7, 1961 . Since then, the suggestion has repeatedly arisen to rename the city back to Stalingrad or to use this name at least temporarily or alternatively. In 2013, the City Duma decided to use the term “Hero City Stalingrad” on the occasion of the celebrations for the 70th anniversary of the surrender of the German troops and on other memorial days. In 2015, a petition signed by 50,000 people from President Putin called for the reintroduction of the old name, which the latter did not rule out and which he recommended to vote on. For commemorative events, the city has been temporarily called Stalingrad again since around 2017.

Towards the end of 2013 there was a series of attacks in Volgograd by North Caucasian Islamists who want to detach their home region from Russia and set up a Muslim emirate there. In October, a burst suicide a bus , killing six passengers . On December 29, a lit bombers in the station a belt of explosives , corresponded to the explosive force of 10 kilograms of TNT, and ripped 17 people to their deaths. The next day, another suicide bomber killed at least 16 people in a bus.

The city is characterized by the typical architecture of late Stalinism of the 1950s and 1960s of the Soviet Union. One of the city's main attractions is the memorial of the Battle of Stalingrad on Mamayev Hill . There is also the mother-home statue , which carries a 33 meter long sword and weighs 7,900 tons (including the foundation). The statue's sword alone weighs 14 tons. At 85 meters (measured from the sole of the foot to the tip of the sword) it is one of the tallest statues in the world .

In the southernmost district of Volgograd (in Krasnoarmeisk) is the former German settlement Alt Sarepta, which was founded in 1765 by the Moravian Brethren . Not far away, right at the confluence of the Volga-Don Canal into the Volga, is Russia's largest statue of Lenin.

From 2014, the city was actively preparing for the World Cup matches. In particular, the international stadium “Volgograd Arena” was built at the foot of the Kurgan “Mamayev”.

In addition, three training grounds based on the Academy for Physical Culture and Sport, the “Olympia” sports complex, the “Zenit” stadium and three new hotels were built and reconstructed in the city for the World Cup. The number 25 ambulance clinical hospital has been reconstructed. A helipad, a road (with a total length of 280 km), utility lines, and a number of objects of the airport were built on the territory.

Volgograd was one of the venues for the 2018 World Cup . For this purpose, the new Volgograd Arena was built at the foot of the memorial on Mamayev Hill and on the bank of the river , which can accommodate around 45,000 people.

After the fall of the Soviet Union , Volgograd was also badly affected by the general economic crisis in the early 1990s. In the meantime, a recovery has started again. Modern Volgograd is still an important industrial center of Russia today . Important branches of industry are shipbuilding , black and non-ferrous metal processing , petroleum processing , steel and aluminum production , plant and mechanical engineering , as well as wood , food and chemical industries . There is also a large run-of-river power plant north of the city , the Volgograd hydropower plant . The Volgogradski Traktorny Zavod was an important tractor manufacturer and armaments factory in the city for almost 90 years.

It was planned to build a nuclear power plant with district heating in Volgograd. However, plans for two blocks were halted.

The main train station of Volgograd

First construction phase of the Volga Bridge near Volgograd 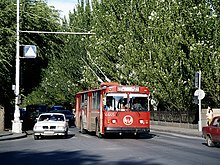 Volgograd maintains a large tram network and since 1984 a light rail (Russian: Skorostnoi Tramwai ) with a track length of 13.5 km, of which 3.3 km in the tunnel. In addition, the so-called Volga Bridge , the 7.1 km longest beam bridge in Europe, connects the urban area of ​​Volgograd on the western Volgaufer with the city of Krasnoslobodsk on the eastern bank. The bridge was opened in October 2009 after a 13-year construction period. Worldwide recognition gained the equivalent of 330 million-euro bridge on May 20, 2010, when strong gusts of wind unique for girder bridges resonance oscillations triggered in the building, which otherwise are only suspension bridges like the former Tacoma Narrows Bridge or the Millennium Bridge in London could watch . This was expressed, among other things, in the fact that a section of reinforced concrete about one kilometer long made waves up to one meter high in the longitudinal direction. The bridge was then closed to traffic and pedestrians, but reopened to pedestrians and cars five days later, following an investigation by Russian experts who found no damage.

Volgograd is connected to the area around the Russian capital Moscow via the R22 Kaspi highway . At the same time, the city is the starting point of the A260 junction , which leads west via Rostov Oblast to the Ukrainian border . This is where the R228 ends , which leads from Syzran via Saratov here.

The Volgograd airport has lost much since the independence of the neighboring former Soviet republics of its importance as a central hub in southern Russia. With the exception of the summer months, when there are still some direct flights abroad (e.g. to Munich ), all international air traffic goes through the Moscow Sheremetyevo , Moscow Domodedovo and Moscow Vnukovo airports .

Mayor Roman Grebennikov, who was elected in 2007 and supported the Kremlin party United Russia and the Communist Party of the Russian Federation in the election, was removed from office on February 23, 2011 after he had previously lost a vote of confidence in the city parliament. Since then the post of mayor has been vacant. Valery Wasilkov and Irina Solovyova acted temporarily until Irina Gussewa was elected mayor on September 16, 2013.

→ Main article : List of sons and daughters of the city of Volgograd

Administrative division of the Volgograd Oblast