The Don ( Russian Дон ) is an 1870 km long tributary of the Azov Sea in the southwest of the European part of Russia .

The source of the Don is located about 200 km south of Moscow in the city of Novomoskovsk on the Central Russian Plate . From there the river flows in a southerly and later in a southeastern direction. After the confluence of the Bitjug and Chopjor , the Medveditsa and the Ilowlja converge . After that, and only about 40 km from the Volga Bend near Volgograd , where the river penetrates the furthest east , the water of the Don flows into the large Zimljansk reservoir to flow through it in a south-westerly direction. Via the Volga-Don Canal , which flows into the reservoir in the northeast, the Don river system has a navigable connection to the Volga, the Caspian Sea , the White Sea and the Baltic Sea . About 150 km to the mouth of the from the Ukraine coming Seversky Donets and only slightly below Rostov-on-Don Don flows as part of an approximately 340  square kilometers large deltas in the Sea of Azov . On its entire course, however, it also absorbs water from rivers, especially those coming from Russia .

In contrast to its 1870 km river length, of which 1360 km are navigable , the straight line distance from the northernmost sources to the mouth in the south is only around 700 km due to the many bends in the river.

The Greek name for the Don was Tanaïs . During the Migration Period , in the Middle Ages and even in the 17th century it was considered the eastern border of Europe (e.g. Jordanes , Snorri Sturluson ).

The current name Don , like the river names Dnepr , Dniester and Seversky Donets , is probably of Iranian origin. These names could therefore come from the Iranian- speaking Scythians or Sarmatians of Eastern Europe and ultimately go back to Old Iranian * dānu 'watercourse' (cf. Ossetian don , water ',' river ', Old Persian danuvatiy ' flows'). (The name of the Danube , which is itself of Celtic origin, can ultimately be derived from the same Indo-European root .)

An exact linguistic assignment is hardly possible due to the close relationship between Scythian and Sarmatian - both belong to the group of north-east Iranian languages  -; the two tribes successively dominated the steppes north of the Black Sea. 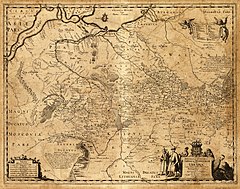 Southern map of the Ukraine from 1648: " Asia " top left, delimited by the Sea of ​​Azov called "Meotis Palus" with the Don flowing into " Azow " on the left edge of the map

The largest tributaries of the Don, viewed downstream, are:

Cities on the Don

The largest city on the Don is Rostov-on-Don , and Novomoskowsk (in the headwaters) and Voronezh (east of Kharkiv ) are also known.