Some Sarmatian burial mounds (yellow triangles), other mounds and sites (other yellow symbols). The finds continue to the east. Scythian residual settlement (yellow areas), Scythian residual empire (red lettering in the Crimea) and sub-tribes of the Jazygens, Roxolans and Siraks (purple lettering, the first two later migrated to the west) within the Ukraine 3rd century BC Chr. – 1. Century AD

The Sarmatians , also called Sauromats , were a tribal confederation of several tribes of Iranian equestrian peoples , which ancient written sources for the first time for the year 513 BC. Be mentioned. The Sarmatians, who are related to the Scythians , originally came from Central Asia and settled between the 6th century BC. And the 4th century AD in the southern Urals . Eventually they reached the steppe areas of the southern European part of today's Russia and the Ukraine , which were initially called Sarmatia by the ancient Greeks and later by the Romans . Here the Sarmatians displaced or replaced from the 3rd century BC onwards. The Scythians, which is proven by numerous grave finds.

The Sarmatian language belonged to the north-east Iranian group of the Indo-European language family ( Central Iranian period) and still lives on today in the language of the Ossetians in the Caucasus . From 370 AD, the loose alliance of the Sarmatian tribes disintegrated when the Huns advanced from the east and the resulting migration to the west.

In 1947, the Soviet historian Boris D. Grekov defined a uniform culture of steppe nomads based on Kurgan grave finds, which stretched from the Black Sea to the east of the Volga , with the main sites in the villages of Kardaielova and Chernaya on the Ural River . Grekov's timing is consistent with most ancient sources and is still used today as a guide:

Ancient writings use the terms "Sauromats" and "Sarmatians" in different ways: sometimes the same people is meant ( Greek / Latin name), sometimes it differentiates between two ethnic groups, with one following the other. Today it is credible that Sauromats were the ancestors of the Sarmatians , perhaps their own earlier name.

The Greek historian Herodotus reports that the Sauromats gave birth to the neighboring Scythians around 513 BC. Chr. Against the attacking Persians under Darius I beistanden. At that point in time the relationship between the two ethnic groups was apparently peaceful.

The Sauromat culture changed in the course of the 4th century BC. The pastureland probably became scarce for the steppe nomads when new groups from the Ural Mountains and the Taiga joined the Sauromats, among them the massagers , who were in turn allied with the Saks . The Sarmatians now formed themselves through social changes and emigration . On the Ilek River in the Southern Urals , richly decorated graves have been found in Kurgan Hills, apparently for members of the elite. It is believed that this region was a center of the Sarmatians.

Herodotus noted in his " Historien " (4.21-117) that the Sauromats arose from the mixing of a group of Scythians with the Amazons . This could be related to a high position as well as a militant outfit of women in early Sarmatian society, as evidenced by female Kurgan graves with weapons and valuable equipment. The Macedonian writer Polyainus reports about AD 165 how the Sarmatian queen Amage was in the 3rd century BC. Defeated the ruler of the Crimean -Skythen with his own hands. 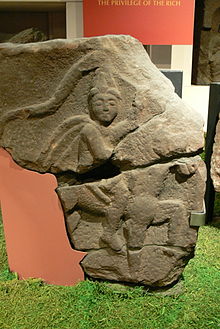 Sarmatian tribes often raided the adjacent Roman Empire , later they were often recruited as auxiliariae (auxiliary troops) and fought as heavy cavalry in various Roman legions . The Roman historian Cassius Dio (155–235) reported how the Sarmatian tribe of the Jazygen suffered a defeat against the Romans in the 1st Marcomannic War at the northern mouth of the Danube on the Black Sea. As part of the following armistice, Emperor Marc Aurel demanded 8,000 cavalry troops from the Jazygian King Zanticus as hostages, of which 5,500 were immediately transferred to the Roman province of Britannia . In Bremetennacum (Ribchester, Lancashire ) these Sarmatians were stationed as auxiliary troops of the Roman Legion VI Victrix to protect Hadrian's Wall against the Scottish Picts .

From the 3rd century onwards, Sarmatians were settled throughout the Roman Empire, fought in Roman armies with their heavily armored cataphracts and often acquired Roman citizenship. The Roman state manual " Notitia Dignitatum " (between 425 and 433 AD) names 18 centers of Sarmatian settlements in Gaul and Italy . Sarmatians have also settled in Thuringia . Sarmatian troops were also stationed on the Lower Rhine, e.g. B. in the Roman fort Gelduba at the place of today's Krefeld . Nevertheless, Roman troops went on behalf of the Emperor Constantine the Elder. Size 334 AD successfully against Sarmatian settlement areas. A center of later Sarmatian ceramics was found near Budapest . 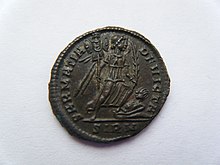 The Roman goddess of victory Victoria triumphs over the personified Sarmatia, coin of Emperor Constantine with the inscription SARMATIA DEVICTA (Sarmatia conquered)

According to Zeune , the language border between the Sarmatians and the Germanic peoples ran along the rivers Warta and Vistula after the migration . 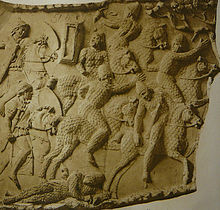 Sarmatian armored riders flee from the Roman cavalry. Relief from the Trajan's Column in Rome.

Feared were the Sarmatian armored lancers, the ambidextrous up to four meters long lances used and a prototype of the medieval knight represent. The mounted archers of the Sarmatians were also famous, who could even shoot backwards with reflex bows of great range and penetrating power (see Parthian maneuver ). One effective tactic used by the Sarmatian tribes was to lure their opponents into ambushes by making sham retreats.

The Sarmatians had a great influence on the late Roman army, which until then had no heavy cavalry. So go not only the heavily armored Roman Kataphrakte on Sarmatian inspiration for, but also the late Roman Contus - lance and helmet TYPES like the Spangenhelm . The Draco standard , a standard of the Roman cavalry in the form of a snake with a dragon or wolf's head, can already be found on images of Sarmatian riders.

The Sarmatians as a whole were not a single people, but were made up of numerous ethnic groups and sub-tribes, linked by a common cultural horizon :

The Aorsen were the largest tribe among the Sarmatians. After splitting off from the Sarmatian tribal confederation, the Aorsen settled north of the Bosporan Empire and conquered almost all of Ukraine, Belarus and the territory of Russia as far as Novgorod . In the 3rd century AD they were finally defeated by the Goths .

The Jazyges ( Latin: Iazyges ) originally lived west of the Don on the Black Sea coast. Their settlement between the Danube and Tisza in the 1st century was additionally promoted by Rome in order to drive a wedge between Germanic and Dacian territory. 5500 men of their cavalry troops were stationed in Roman service in Britain.

The Alans are from the 2nd century BC. In northern Kazakhstan and in the northeast of the Caspian Sea , then moved to the southern Russian steppes between the Volga and Don from the middle of the 1st century AD. They existed as a separate tribal association longer than the Sarmatians and later also took on other cultural elements. Some of the Alans joined the Vandals in the migration of peoples and came to Africa with them in the 5th century . In the 9th century, the state of Alania emerged in the Kuban region and in the North Caucasus, and after a few decades it was Christianized by Byzantine missionaries . With the invasion of the Mongols in the 13th century, this Alanic kingdom was smashed and several thousand Alans were expelled to Hungary.

The Roxolans were originally from the steppes of today's Ukraine west of the Don. From the 1st century AD they settled north of the Danube and repeatedly attacked the Roman province of Moesia .

The Siraks were numerically one of the smaller Sarmatian tribes and originally resident in Kazakhstan. In the 5th century BC They immigrated to the areas north of the Black Sea and settled in the late 4th century BC. Between the Don and the Caucasus, where they finally gained control over the Kuban area. The Siraks had lively relations with the Bosporan Empire and many of them gave up their semi-nomadic lifestyle, settled down and adopted the Greek culture and language.

In contrast to the nomadic Sarmatian tribes, the Maioten were sedentary farmers, also on the Russian Taman Peninsula and in the Caucasus, also strongly influenced by Greek culture.

In addition to the ethnic groups listed, there were also the massagers , the Saks, and numerous smaller Sarmatian tribes (possibly including the Borans ; also the Gynaecocratumeni , mentioned by Pomponius Mela and Pliny the Elder , who lived in the vicinity of the Sea of ​​Azov and were regarded as spouses of the Amazons).

References to the present

Today's Ossetians in the North Caucasus are linguistically, ethnically and culturally the direct descendants of the Sarmatic tribe of the Alans .

Some researchers attribute the designation Rus as the old name of Russia and the Russians or Ras as the old name of Serbia and the Serbs to the Alanic sub-tribe of the Ruchs-as or to the Sarmatian Roxolans . This Rukhs-as-Theory is generally rejected and Rus is identified as the name of the Vikings in Russia.

The origin of the name of the Serbs ( Srb ) and the Croats Hrvat ( Houravat, Houravati ) from Sarmatian tribes is conceivable . However, a direct connection between the ethnogenesis of South Slavic peoples and Sarmatian tribes was questioned and partially refuted as early as the 19th century.

As a national myth , the Sarmatians live on in Poland . The Sarmatism was in the early modern period for the team spirit of the " Polish noble nation " in the age of Aristocratic Republic (1569-1795) of similar importance as the Germans for Germans. A book by the Italian Alexander Guagnini , known as the Description of Sarmatian Europe , was first printed in Krakow in 1578 . From incomprehensible sources it contained Latin descriptions of the countries of Eastern Europe, their history, geography, religion and traditions. In 1611 an expanded version translated into Polish appeared.

The story of the Sarmatian auxiliaries and their commander served as the background for the novel The Horsemen of the Sarmatians ( Island of Ghosts , 1992) by Gillian Bradshaw .

In the movie King Arthur , a Roman commander named Artorius Castus leads the last six remaining Sarmatian knights on the British Hadrian's Wall in 467, first on a mission to the enemy Pict territory and finally together with the Picts under their leader Merlin in the great battle against the invading forces Saxony .

The American anthropologist and myth researcher Scott Littleton has shown in various publications that there could be historical connections between the Arthurian stories and the presence of Sarmatian horsemen in Britain. He assumes that the stories about the Knights of the Round Table also go back to the heavily armored Sarmatian lancers. Littleton points to numerous parallels between elements of the Arthurian legend and the older Sarmatian Narten myths. At the end of the 2nd century riders of the Sarmatian branch of the Alans were present as Roman auxiliary troops in Gaul, where the legends of the round table knight Lancelot later developed.