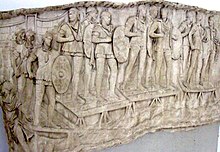 Auxiliaries on a pontoon bridge. The oval shields make it easy to distinguish the soldiers from the legionnaires (relief on the Trajan's column ) 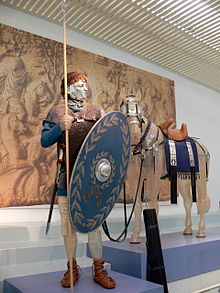 Roman auxiliary cavalryman in the equipment of the 1st and 2nd centuries, figurine in the Het Valkhof museum in Nijmegen (Gelderland)

Equipment of an auxiliary soldier in the 3rd century ( Saalburg )

The auxiliary troops (Latin auxilium " help ") were units of the Roman army that were recruited from allied peoples or free residents (without citizenship = peregrini ) of the border provinces . If the soldiers were discharged with honor, they were mostly given Roman citizenship at the end of their service life .

Auxiliary troops, which were recruited as needed or called in by the allies , already existed at the time of the Roman Republic. A more or less uniform structure and, above all, the integration of the auxiliary troops only came about through the reforms of the emperor Augustus , who created a standing army around the birth of Christ.

According to Tacitus, the auxiliary troops made up about half of the regular Roman armed forces, i.e. at least 150,000 soldiers. Exact information is missing. The officers were usually Romans; The teams used were primarily men who were born free, but who did not have Roman citizenship, although it could happen that individual units were given citizenship as a special distinction. The regular service period was 25 years (26 years in the fleet). The soldiers received a lower wage than the legionaries (who were already Roman citizens), but after the honorable farewell the civil rights (documented in the military diplomas ) for themselves and their descendants. This was a major incentive for joining the force. In some cases there was also an exemption from taxes and public services for the veterans .

The auxiliary troops supplemented the heavy infantry of the actual legionary troops. The cavalry, in particular, was far too few in number in the legions to be used in combat. Likewise, the bulk of the special troops, such as archers or slingers, were provided by the auxiliary units. In addition, the auxiliary units were also used as counter troops, which should fight the various enemies with their own tactics. There are reports of camel troops fighting Arab riders. Overall, however, a standardization soon set in, especially among foot soldiers, so that the majority of the auxiliary infantry could hardly be distinguished from the legionnaires in terms of their equipment since the late 1st century. The officers were, as mentioned, almost all Roman citizens, mostly abkommandierte Legion officers, each ascended a rank for staff assigned an auxiliary unit.

In addition to the at least initial differences in terms of weapons technology compared to regular legionary troops, the deployment outside of major wars was also different from the legion: Auxiliary units were deployed in much smaller associations or units in the area to pacify and monitor the provinces and generally in the forts arranged along the borders stationed. Thus, the day-to-day surveillance of the borders in peacetime was largely in the hands of auxiliary troops. The legions, on the other hand, were in a much stronger concentration (one or two legions in a legionary camp ) responsible for crucial tasks and had their camps mostly in the hinterland.

A massive Romanization of the provinces also took place via the auxiliary units, as these soon, with a few exceptions, were no longer recruited from the areas of origin of the first members, but locally, which quickly lost their original ties to an ethnic group. An auxiliary unit could still be called Parthica or Helvetica , without this name being much more than a reminder of its beginnings. Only Latin and the Roman way of life remained as the lowest common denominator , especially since the veterans of the auxiliary troops now had Roman citizenship. It was not uncommon for their descendants to join the army as legionaries.

Structure of the auxiliary units

In contrast to the Legion, in which the cohorts were usually commanded by centurions , the auxiliary units were usually headed by prefects and sometimes tribunes. In the Alen, who did not know any centurions, the decurion as commander of a tower corresponded to the rank of centurion. The individual units differed not only in terms of armament and origin, but also in terms of size, prestige and salary.

In the high imperial era, the officer positions in the auxiliary units increasingly became a domain of the knighthood . As early as Claudius (41 to 54 AD) there was a standardized knightly career over three levels ( tres militiae ), as it was to be found in the legions since Augustus. Here was the first command ( cohors quingenaria ) over a cohort of infantry with 500 soldiers. These soldiers did not have Roman citizenship. After this first leadership experience, either serving in the Legion as tribunus angusticlavius , or commanding a cohort of Roman citizens comprising 500 soldiers (who were always led by a tribune), or commanding a 1,000-man cohort ( cohors miliaria ) could follow . Subsequently, the officer received an Alen Prefecture, i.e. command of a cavalry unit of around 500 men ( ala quingenaria ). In some cases, command of a cavalry unit of almost 1,000 riders ( ala miliaria ) was still able to follow. This post was filled with senatorial officers.

During the time of the Roman Republic, the auxiliary units were mainly stored in tents or wattle-and-daub accommodations; half-timbered buildings appeared later, in the 2nd / 3rd centuries. Barracks built in the 18th century, occupied by 6 or 8 men (sometimes more). Typical for mounted units were barracks rooms with access to the horse stables immediately adjacent.

Example of the barracks of a cavalry unit (Ala), 2./3. Century, room typically with a passage to the horse stables immediately adjacent.

Example: The regular auxiliary troops of Lower Germany in the early Imperial Era (after Jahn)

The number of ales and cohorts in Lower Germany ( Germania inferior )

Germanicus led the campaign against the Martians (14 AD) in addition to 12,000 legionary soldiers, 26 sociae cohortes and 8 equitum alae . The former were divided into about 16 regular cohortes ( expeditae cohortes , auxiliariae cohortes ) and about 10 cohorts of irregular popular mobilization ( ceteri sociorum , leves cohortes ). The cavalry consisted almost exclusively and the auxiliary infantry for the most part consisted of Gallic and Germanic troops. The sources mentioned as auxiliary associations of Germanicus: c ohortes Raetorum et cohortes Vindelicorum , Batavi, Volksaufgebote der Chauken, cohortes Gallicae , as well as tumultiariae catervae Germanorum cis Rhenum colentium , who were recruited from Lower Germany and northern Belgica .

When Emperor Caracalla granted Roman citizenship to all free residents of the empire in 212, from then on it was mainly barbarians from across the empire who joined the auxiliary troops. The military reforms with which one then sought to react to the " imperial crisis " changed the structure of the imperial army. From about 300 onwards, the supervision of the borders was no longer entrusted to the auxiliaries, but to the limitanei / riparenses , who performed this task throughout late antiquity .

Foreign soldiers served since the 4th century either side by side with Romans in the regular army, where they now made a career and were able to advance to high officer positions (see also army masters ), or as a separate alliance treaty ( foedus ) to Rome tied mercenaries ( foederati ) under their own leaders. The auxilia, however, largely disappear from the sources around this time. If from now on auxilia is occasionally spoken of , this term is no longer used in the special meaning of the principle epoch.