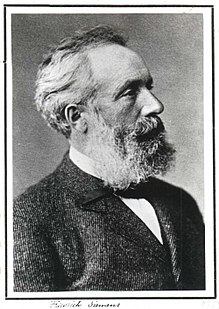 Friedrich Siemens (born December 8, 1826 in Menzendorf , † May 24, 1904 in Dresden , full name: Friedrich August Siemens ) was a German entrepreneur from the Siemens family and a brother of Werner von Siemens .

As the eleventh child of the landlord Christian Ferdinand Siemens (1787–1840) and his wife Eleonore Henriette Deichmann (1792–1839), Friedrich was born as a so-called 7-month child, so his mental and physical development was very delayed. Since his parents died very early, Friedrich grew up with an uncle.

Grave of Friedrich Siemens in the New Annenfriedhof

In contrast to his brother, he was not ennobled and therefore does not bear the Siemens name .

Siemens died in Dresden in 1904. His grave is in the New Annenfriedhof in Dresden-Löbtau. The grave figure was created by the sculptor Johannes Schilling .

When he was 15, he decided to be a cabin boy. Friedrich Siemens later worked for his brother's company in Great Britain . In 1856 he developed a regenerative smelting furnace with gas firing (see also Siemens-Martin furnace ). On December 2, 1856, he received British patent no. 2861 entitled "Improved Arrangement of Furnaces, which improvements are applicable in all cases where great heat is required" .

In 1856 he founded a furnace construction company in Dresden, which later became Friedrich Siemens Industrieofenbau (FSI). In 1862 his brother Hans Siemens founded the Dresden glass factory for the commercial exploitation of this invention.

In 1867 Friedrich Siemens took over the glass factory in Dresden- Löbtau from his late brother Hans . In 1868 the continuously operating furnace with regenerative firing for the mass production of glass was introduced. The production volume increased 66 times to two million bottles per month.

In 1871 a second glassworks was bought near Dresden. The royal "Friedrichshütte" (Dresdner Strasse in Freital-Döhlen ) founded by Adolf Theodor Roscher in 1822 was converted into a stock corporation after his death in 1861 and changed hands several times until Friedrich Siemens took over the factory. In 1879 a new branch was founded in Neusattl near Elbogen ( Bohemia ).

The Siemens furnace for cremation, contemporary illustration from 1874 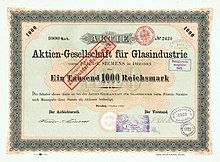 Share over 1000 marks of the AG for glass industry vorm. Friedr. Siemens from October 1888

In 1874 the Dresden physician Friedrich Küchenmeister commissioned Siemens to build a crematorium oven . On October 9, 1874, the first ever cremation in a closed fire took place in Dresden in the regeneration furnace developed by Siemens (in what was then Siemens' glass factory in Dresden ).

In 1888, Friedrich Siemens converted his operations into a stock corporation. The joint stock company for the glass industry, formerly Friedrich Siemens , was created. In 1894 he leased the Seltersbrunnen in Niederselters and also the Mineralbrunnen Staatl. Fachingen , which his heirs ran until 1995. In 1958 they founded the company Siemens & Co. , which still produces Emser salt today.

In 1900 he received an honorary doctorate from the Technical University of Dresden . The short laudation read: “Because of his immortal merits, which he has earned through the inventions of the regenerative furnace for generating high temperatures, the furnace for melting glass, the regenerative burner for the production of brightly lit flames and the chemical regeneration of the heat of the flame gases from highly heated furnaces . "