This article describes the rank of the Roman military centurion; for the homonymous scientific genus name, see the only species of the genus, the old man's face . 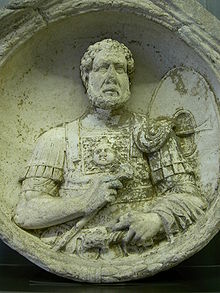 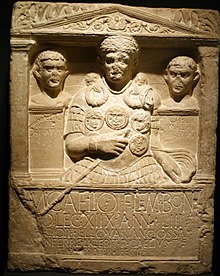 The tombstone of Marcus Caelius 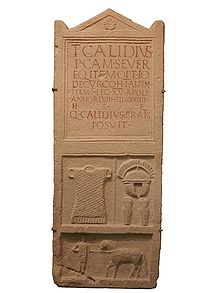 The tombstone of Titus Calidius Severus , greaves and the helmet with its crossed plume are clearly visible. Furthermore, the ascent is described.

Centurio or Centurion ("Hundertschaftsführer", from Latin centum = hundred), in ancient Greek sources also known as Hekatontarch (Greek ἑκατόνταρχος , Hekatóntarchos), was the name for an officer of the Roman Empire who normally had a Centuria (" Hundertschaft ") commanded the Roman legion or a comparable unit of the auxiliary troops (auxiliary troops). However, there were various gradations within the rank. The name suggests "one hundred", but a regular Centuria already consisted of about 80 legionnaires in the early republic .

In contrast to the staff officers , who had to come from the knightly or senatorial class , centurions always rose from the rank of team; theoretically every Roman citizen could become a centurion. In the initial phase of the Legion, the Centurion was elected by his soldiers, later appointed by the Legate , the Legion Commander. In the imperial era, the appointment had to be confirmed by the emperor. The centurion class formed the backbone of the Roman army and was crucial for the discipline and order of the troops. There are a multitude of accounts of the harshness and bravery of the centurions. How hard a battle was for the Roman side was therefore often (also) determined by the number of fallen centurions. In contrast to the crews and "NCOs", many centurions were not dismissed after their service time , but remained with the army until their death.

As the superior, the centurion was responsible for training and equipping his legionaries. He had the right to mark and punish his people ; for the latter, the vine ( vitis ) was often used, which he carried as a sign of his rank. In addition, the equipment and uniforms of the centurions differed from those of the men, most noticeably through the crista transversa , the greaves and the sword carried on the left side . He received a higher salary depending on the position ; in the second century it was about twenty times the wages of a legionnaire.

In addition to his own room in the accommodation building, he was entitled to his own tent, riding horse and pack animal. The armor and decorations of a centurion can often be found on the gravestones of deceased officers.

The centurion was supported by an optio as deputy and other principals such as the Signifer and the Tesserarius .

Centurion was not a uniform rank. With a few exceptions, centurions all headed a centurie, but the actual rank resulted from the position of this centurie within the legion, which was expressed in additional designations. A distinction was first made between the centurions of the various maniples (in ascending order) Hastaten , Principes and Triarier (the latter often referred to as pili ). Within a manipula, the commander of the first Centuria ( prior ) stood above that of the second ( posterior ). So the ranking looked like this (descending):

However, there was only a real superior relationship between the prior and posterior of the same manipulator. If a cohort was set up independently and no tribune was appointed for the command, it was led by the highest-ranking centurion of the cohort, the Pilus Prior .

The primus pilus was particularly emphasized . He led the first Centuria, which during some time of the Roman Empire had twice the manpower of the other Centuria and led the legionary eagle . In the Legion, the Primus Pilus was only subordinate to the Legate , the six tribunes and the Praefectus Castrorum . Three terms are derived from this position:

For the emperors, the Primipilares represented a reservoir of capable leaders who were not entangled in the structures of the established power elites in Rome.

Outside the cohort structure, centurions could still be used as:

This strong subdivision makes it difficult to compare the Centurion with modern ranks. In his role as leader of an 80 to 100-man infantry unit, he most closely resembles a captain . A primus pilus, on the other hand, might be comparable to a colonel and had considerable social prestige.