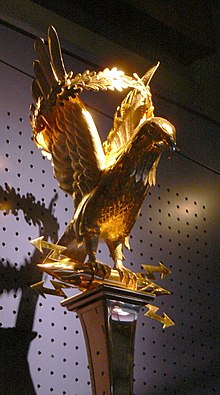 Replica of a legionary eagle in the Carnuntinum Museum 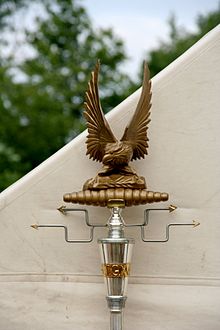 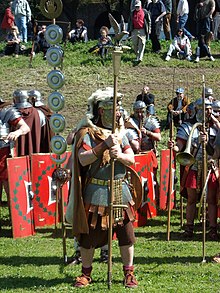 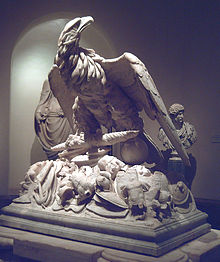 Aquila on a grave monument from the villa of General Marcus Valerius Messalla Corvinus , created during the reign of Emperor Augustus

The Aquila ( Latin  Aquila , original meaning: " eagle "), in German also often referred to as the legionary eagle , was the highest-ranking standard of the Roman legions .

The Aquila enjoyed the greatest veneration of all standards and her loss was considered the greatest possible disgrace for a troop, while the regaining of lost Aquilae was celebrated as an important event. The recovery of the three legionary eagles lost in the Varus Battle was a goal of the Germanicus campaigns and the return by the Parthians of the legionary eagles lost in the Battle of Carrhae under Marcus Licinius Crassus is depicted on coins and on the breastplate of Augustus of Primaporta .

In the Roman religion the eagle was an important symbol , an ominous symbol for recognizing the Numina by bird's eye view . According to Roman mythology , the eagle was the messenger of the main god Jupiter (→ symbolism of the eagle ). In the beginning he was - besides wolves, minotaurs , horses and boars - one of five animal-shaped standards ( signa ) of the Roman army and symbolized the strength, success and power conveyed by Jupiter's favor. The legionary eagle only acquired a prominent position under the Roman general Gaius Marius , from whose childhood the writer Plutarch reported that as a boy he caught an eagle's nest with seven eagle chicks in his toga, which Seher interpreted his parents as a sign of his future statesmanship would have. The role of the eagle as the divine prodigium of future rulers (omen imperii) can also be found - as passed down by the writer Suetonius - in the life of Augustus , who as a young man tore bread from his hands by an eagle and returned it after a flight into the air should be. Pliny the Elder reported that Gaius Marius during his second consulate, probably as part of his army reform between 104 and 102 BC. BC, the eagle bestowed on his legions after the other standards had begun to be left in the camp a few years earlier. The legionary eagle thus gained the role of a badge of honor and identification and acted as a militant incentive for the legions that now existed for a longer period of time.

No ancient aquilae have survived, so their construction can only be reconstructed on the basis of pictorial and written representations. The rod of the Aquila carried a lance shoe and two handles to put the standard in the ground and to be able to pull it out again, but mostly no other decorations like the phalerae often attached to other standard symbols . The emblem of the Romans, the letters SPQR , were also shown on the field symbol. The actual eagle sat on a pedestal at the upper end of the pole and was initially made of gold-plated silver, but mostly made of pure gold during the imperial era. The role of the eagle as a symbol of Jupiter was emphasized by thunderbolts carried in its claws and in some cases by an acorn carried in its beak . The wings were usually upwards, more rarely to the side, spread out or seldom laid out and could wear a laurel wreath , which was possibly awarded as an award. In some cases, additional ornamentation appeared.

On the grave relief of Aquilifers the Legio II Parthica Felsonius Verus is shown a Aquila, where the eagle is surrounded by a kind of cage, from which some authors have derived the assumption this Legion had had a live eagle as ensigns. It could also have been a protective device or a portable shrine for a normal Aquila.

The Aquila was under the supervision of the first cohort , especially the leading Primus Pilus , the highest centurion of the legion. It was worn by the Aquilifer (Latin for "eagle bearer"), the legion's highest-ranking standard bearer. This ranked directly below the centurions, but reached their rank only rarely in contrast to other high-ranking NCOs. Probably the rank of Aquilifer was awarded as an honorary post to deserving NCOs. As a "duplicarius" the Aquilifer received twice the pay of a normal legionnaire.

The equipment of the Aquilifer included a round shield ( parma ) in addition to the Aquila . On grave steles, eagle-bearers are also often depicted with scale armor (lorica squamata) and a lion's skin over their helmets. The sword was sometimes worn on the left side, as with the centurions and in contrast to the common legionnaire.

In contrast to the Signa of the individual Centuries , the Aquila probably had no tactical significance as a point of reference for the units in battle. It was only brought out of the camp when the entire legion marched out, and was carried forward during the orderly march of the legion.

The Aquila was of particular importance as a symbol of legitimation and identification . The legionnaire's active period of service was called service sub aquila (“under the eagle”) and the day the legion was founded was celebrated as dies natalis aquilae (“birthday of the eagle”). Protecting the eagle in battle was probably an important motivation for the legionnaires . Caesar writes how the Aquilifer of the Legio X Gemina first jumped overboard on the landing in Britain and thus brought the reluctant legionnaires to advance on the enemy.