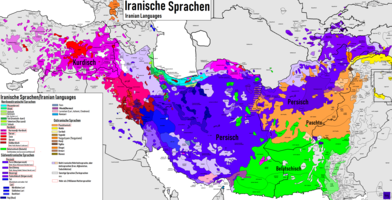 Genetic division of the Iranian languages

The name “Iranian languages” is a term used in linguistics - in this sense it was first used by the Indologist Christian Lassen from 1836 and later by the orientalist and Iranist Friedrich Spiegel , who preferred Eranic as a term - and describes a language group that is associated with the Indo-Aryan languages of the Indian subcontinent and together with these forms the Indo-Iranian or Aryan branch of the Indo-European language family . This term is derived from the traditional term neupers. Īrān from middle pers. Rān . He goes on altpers. ariya- (= avest. airiia- ) from Iran. arya- (= “Aryan”, “Aryans”), which has less of a political than primarily an ethnic content and describes the entirety of Iranian languages ​​and peoples and their area of ​​distribution that cannot be marked by political borders.

Since the adjective “Iranian” is primarily associated with the eponymous state “Iran” today, Gilbert Lazard , an expert in the field of Iranian languages, has consistently advocated using the term “Iranian languages” as an analogical counterpart since 1977 "Indo-Aryan". He took up the term, which was introduced by Robert Needham Cust in the 19th century and was also used by the ancient orientalists Max Müller and George Grierson , but which, according to Schmitt (1994), could not gain acceptance. The linguist Ahmad Hasan Dani nevertheless uses the term 'Iranian' and explains that 'Iranian' is used more frequently as its short form. This designation clarifies the historical position of the Indo-Iranian languages ​​structurally better than the more common designation Iranian language family .

An ethno-linguistic meaning of the term is clearly demonstrated in some places: Darius I (522–486 BC) and Xerxes I (486–465 BC) not only refer to themselves as "Persians" and on royal inscriptions "Son of a Persian", but also as "Aryan" ( old Persian Ariya ) and "Aryan origin" ( Ariya čiça ); the Sassanid kings of the 3rd century (from Shapur I ) could be titled as "King of the kings of Ērān ( Iran ) and Anerān ( non-Iran )" (middle Pers . šāhān šāh Ērān u Anērān ).

Very few scientists use the spelling “Eranian” these days. Although this is the more accurate phonetic variant, "Iranian" clearly asserted itself in the German language in the 20th century - also in specialist literature.

The languages ​​and their geographical distribution

The following Iranian languages ​​are spoken by at least one million people:

Other important Iranian languages ​​according to the number of speakers they speak are:

Sources for the number of speakers: Ethnologue and the web link given below, also current yearbooks such as Fischer Weltalmanach and the yearbook of the Encyclopedia Britannica.

The Iranian languages ​​are classified primarily according to linguistic and secondarily also according to geographical aspects. The following family tree list gives an overview of the branches of Iranian generally recognized today. The four main groups - Northwest, Southwest; Northeast, Southeast - are detailed in the next section.

Note: The branches Munji-Yidgha, Wakhi, Shugni-Yazghulami and Sanglichi-Zebaki, formerly known as the “Pamir languages”, do not represent a genetic unit, but form equal sub-branches of Southeast Iranian. According to recent findings, the Ormuri-Parachi belongs to Southeast Iranian (see CIL), Ethnologue uses an outdated classification here.

The Iranian languages ​​are historically divided into three periods:

The following genetic classification of the Iranian languages ​​is based on the Compendium Linguarum Iranicarum (CIL) and the work The Iranian languages ​​in the past and present by R. Schmitt (see literature). In some cases it differs greatly from the one given in Ethnologue , especially when it comes to the question of the difference between dialect and language ( Ethnologue classifies many dialects as separate languages). The classification contains the most important dialects - based primarily on David Dalby, The Linguasphere Register - and the current number of speakers (as of 2005, numerous checked and compared sources).

For illustration: Genetic units are shown in bold (even if a unit consists of only one language), the languages ​​in normal script, dialects in italics. For languages ​​without an indication of the number of speakers, there is no reliable information on this in the literature; such languages ​​usually have a few thousand speakers at most. For a better overview of the classification, reference is made to the summary of the main groups above.

As ancient Iranian languages is called the oldest of the traditional Iranian languages. Essentially, these are the ones up to approx. 300 BC. Chr. Written texts of the Avestian of the " Avesta " corpus of the Zoroastrians and of the old Persian of the Achaemenid royal inscriptions.

Avestan is a kind of church language of the Zoroastrians, while Old Persian is only known to be the mother tongue of the Achaemenid royal family. It is unclear for what purpose documents were walled in or inscriptions carved into rock walls at an illegible height from the ground - in a language that only a few people in the empire understood.

The testimonies that have come down to nomadic tribes of the Ukrainian-South Russian steppe belt such as Scythians , Sarmatians etc. are difficult to classify. The Scythian excursion Herodotus is considered the oldest report on these ancient Iranian peoples. Direct written certificates have not been preserved.

The term Black Sea , which is usually considered Scythian, Greek Πόντος Άξεινος from Iran. * Axšaina- “Black (Sea)” clearly belongs to a system that symbolically denotes the cardinal points using color words and therefore means the “northern sea”. The people who used this system must have lived south of this sea. Since the name was first used in a similar way for the Red Sea during the Achaemenid period , it seems reasonable to identify the Iranian peoples as the namesake of these seas.

The writings of the old Iranian period

The Avesta is written in its own script, the Avesta script . This is written from right to left and reproduces sounds quite precisely. She writes vowels and tries to reproduce the pronunciation accurately.

A separate script was developed for Old Persian as the “language of the king”, which is based on the cuneiform script , using wedges and angles. However, the script written from left to right is a new creation in its own right. The "alphabet" consists of word separators and 36 phonetic signs, which can be assigned to four groups: 1. pure vowel signs (a, i, u), 2. consonant signs with an inherent i-vowel, 3. consonant signs with an inherent u-vowel, 4. Consonant signs with inherent a-vowel or mere consonantic value. It was first used by Darius I in his large inscription on the rock of Bisotun (Behistun). Some problems arise due to the inconsistent vowel and diphthong designations and numerous other ambiguities. This font has hardly been used for administrative or literary purposes. For this purpose, the Persians used Aramaic (in the Aramaic script ) and Spatelamic (written in a variant of the real Mesopotamian cuneiform script).

Definition of the period

The Central Iranian period begins in the fourth century BC. Its end in the eighth or ninth century AD - in some cases later use has been documented - is heralded with the Islamization of Iran after the Arab storm. Thereafter, New Iranian languages ​​dominate the Iranian area. Since a break in the use of writing can be observed compared to the old Iranian period, because the old Persian cuneiform script was lost with the Achaemenids , those can be designated as Central Iranian languages whose written use and tradition began in the post- Achaemenid but pre-Islamic period. This includes forms of language that are secondary scripts used in Iran, such as the Manichaean, Nestorian-Syrian or Arabic script.

The numerous Sarmatian , Alanic and related tribes that settled north of the Caucasus and the Black and Caspian Seas have left little direct language evidence. The Iranian name of the Greek inscriptions from the Greek colonies along the north coast of the Black Sea from the 4th century BC is most tangible for research . Sarmatians invaded this area onwards - to which other names (persons, tribal and geographical names) as well as words from literary or inscribed tradition in a multitude of languages ​​and finally modern toponomastic continuators and loanwords (especially those from the Alanic im Hungarian ).

The Alans are also responsible for two texts written in Greek: on the one hand the Alanic ("old Ossetian") inscription on a grave stele on the bank of the Great Selenchuk (a tributary of the Kuban ) from around the 10th to 12th centuries AD, on the other hand, two verses in the epilogue to the “Theogony” of the Byzantine Johannes Tzetzes (mid-12th century).

In addition to these Central Iranian languages, which can be grasped through text transmission, there must have been other languages ​​and dialects. According to Indian sources, the people of the Kambojas lived in the east of Afghanistan , for whose language Indian grammarians also cite individual forms, which indicate that this was an Iranian - more precisely: an Eastern Iranian language. About the Parthian language, which was spoken in addition to other languages ​​or dialects such as "Middle Median", the existence of which one has to assume, but which can only be inferred indirectly, Iustinus says : " sermo his inter Scythicum Medicumque medius et utrimque mixtus " (41 , 2,3), it is a mixture of Scythian (ie Sakian) and Median.

The Eastern Iranian group is in some ways much more conservative than the Western Iranian group, especially in that the final syllables have not disappeared. As a result, morphology and syntax as a whole have remained at an older level, since in the nominal and verbal systems a far greater variety of form categories has been preserved in some cases. On the other hand, however, the East Iranian is clearly different from the West Iranian due to innovations, especially in phonology.

A large number of differences in individual features make Eastern Iranian appear to be quite inconsistent. Nonetheless, the exclusive innovations distinguish Eastern Iranian as an independent, coherent language group, whose internal structure into South and Northeast Iranian will only become tangible at the new level of development, as no language that can be classified as Southeast Iranian has been documented in older times.

The writings of the Central Iranian period

In addition to the above-mentioned scripts (Manichean, Nestorian-Syrian and Arabic), four of the six attested Central Iranian languages ​​are characterized by similar writing systems, which have emerged from the Aramaic alphabet : Parthian , Middle Persian , Sogdian and Choresmian preserve the togetherness formed under the Achaemenid rule while the Bactrian largely a local variant of the Greek alphabet and the Khotan- and Tumschuqsakische central Asian variants of Indian Brahmi script have introduced. Aramaic script and language, which were used throughout the empire as a means of the Achaemenid empire administration and which were established particularly in parts of the empire that had not previously been written, remained in use in the larger and smaller successor states of this empire due to the lack of a usable alternative. In many respects, however, a continuous change took place, for which the decisive factor was that in these smaller states mainly translators for only one language pair, Aramaic and the respective Iranian language, were needed. Gradually, Iranian native speakers replaced the Aramaeans , so that the written texts were increasingly interspersed with Iranian words and the Aramaic forms that were still used over time solidified into conventionally used symbols.