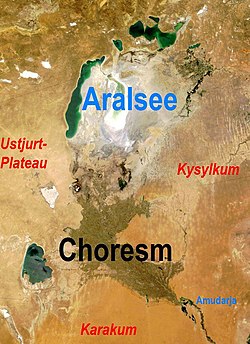 The former main area of ​​distribution of the Choresm language: the large oasis of Choresm

Khorezm was a central Iranian language .

Until its final suppression by Turkic languages , probably especially Kipchak , in the 14th century, Khorezm was spoken mainly in Khorezmia . The area of ​​distribution of this language followed immediately to the north with that of the Sogdian and Parthian .

The oldest evidence of (middle) chorus mixing are two inscriptions on clay pots from Qoy-Qrylgan-Qal'a , dating from the 3rd or 2nd century BC. And are written in a native script of Aramaic origin. The same script, again containing heterographic elements, and the same language can also be found on numerous coins, silver vessels from the Urals , in documents on wood and leather from Topraq-qal'a and Jakke-Parsan, and on alabaster ossuaries from Toq-qal ' a. A large part of these texts has not yet been edited and although many of the documents and urn inscriptions contain date information, little can be gained from this, since the era after which they are dated is disputed or unknown. Better than the language of these sources from the pre-Islamic period - the Arab conquest at the beginning of the 8th century forms the dividing line - one knows the late chorus, which was written in Arabic - more precisely because of a few additional characters: arabo-choresmic - script. These are, on the one hand, a choresmic interlinear version of az-Zamachscharis (1075–1144) “Muqaddimat al-adab”, which has been preserved in a manuscript (from around 1200) from Konya , and on the other hand, quotations from legal writings of the 13th century, namely from az-Zahidi's "Qunyat al-munya" and at-Tardschumani's "Yatimat ad-dahr" as well as a relevant glossary of the chorzmic words that occur there. This group of language testimonies should also be joined by a number of choresmic names, glosses, astronomical and calendar terms (names of days, months, etc.) from the choresmist polymath al-Biruni (973-1048), who also expressly testifies that the choresmians have their own Possessed writing and literature.