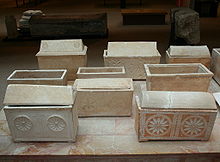 Ossuaries in the Hecht Museum, University of Haifa

Inscription on the " James Ossuary ".

An ossuary is a container that is used to store human bones.

After the corpse has decayed, the bones are collected and placed in an ossuary as a secondary burial.

The custom of secondary burial of bones is known from ancient Persia and the Levant , among others . The earliest Levantine finds come from the Chalcolithic . They are often designed as houses. There are also types in which the front is designed in human form or in the form of mythological animals.

Biblical texts give no direct information about secondary burials, although the phrase “be gathered to (his) fathers” may have its solid background in the use of ossuaries. The silver amulets of Ketef Hinnom form an extra-biblical testimony in the context of burials . They contain parts of the Aaronic Blessing . The approx. 2-3 year period of putrefaction was probably considered to be a kind of transition period in which the deceased found himself in the transition between the worlds of the living and the dead.

V. a. numerous ossuaries from the area around Jerusalem from the time of the Second Temple . Due to the biblical ban on images, the ossuaries of this time are no longer anthro- or theriopomorphic, but were either unadorned or decorated with geometric patterns. Occasionally the names of the deceased can be found carved into the stone or written on it with charcoal. Flat or curved stone slabs served as covers, but also lids with triangular sides. The dimensions of ossuaries vary considerably: particularly small boxes are known, as the inscriptions show that the bones of children were buried in them.

The older assumption that the use of ossuaries was restricted to Pharisees has now been refuted. Ossuaries were also found which, according to their inscriptions, also served members of the priestly upper class, i.e. Sadducees , for secondary burial.

The so-called James Ossuary , which an Israeli entrepreneur bought on the antique market in the 1970s, attracted media attention . It bears the Aramaic inscription "Ja'aqob bar Josef achui di-Jeschua" ("Jacob, son of Joseph, brother of Jesus"). It has been speculated that the ossuary contains the bones of James the Righteous . In addition to the fact that the names Jacob, Joseph and Jesus appeared very frequently during this time, the Israeli Antiquities Authority later exposed the inscription as a modern addition and the alleged reference to Jesus as a forgery.