The title of this article is ambiguous. Further meanings are listed under Konya (disambiguation) .

Iconium is a redirect to this article. For the titular bishopric see Titular Archbishopric Iconium .
Template: Infobox Location in Turkey / Maintenance / District Without Inhabitants Or Area

Konya ( Ottoman قونیه, from ancient Greek Ἰκόνιον Ikónion , Latin Iconium ) is the capital of the Turkish province of the same name, Konya , which is the largest province in Turkey in terms of area . Konya is the seventh largest city in the country. Since the last territorial reform , the Büyükşehir Belediyesi (Metropolitan Municipality) Konya is identical in area and population to the province.

The city is located about 200 kilometers south of the capital Ankara in the Konya plain ( Turkish Konya Ovası ) at about 1200 meters above sea level, almost in the geographical center of Anatolia . The plateau has no outflow to the sea, only local rivers that flow into inland lakes . In the vicinity it is towered over by some up to 2300 meter high mountains, the northern continuation of the Taurus Mountains . To the west is the Altınapa Dam .

During the territorial reform 2013/2014, the villages and the individual mahallas of the Belediye were each merged into one mahall and subordinated to the respective district / city district.

The following table provides information on the development of the population of the city (Şehir), district (İlçe) and province (İl) Konya. The numbers were taken from the results of the censuses published as PDF files for the specified years, available from the TURKSTAT (TÜİK) library

Konya is characterized by a continental climate with cold, snowy winters (average temperature 0 ° C to 2 ° C) and hot, dry summers (average temperature 20 ° C to 24 ° C). Although rain falls all year round, a pronounced dry phase is noticeable in the summer months. According to Köppen , the location can be described as a semi-arid steppe climate (BSk).

The ancient name of the city was Iconium - Iconium in Roman times - and has been around since the 4th century BC. Proven. Possibly this name can be connected with Ikkunawija , one in Hittite sources between approx. 1500 and 1200 BC. Repeatedly attested city.

The cities of the Roman sub-province of Lycaonia mostly belonged to Phrygia in Greek times . During excavations in the center of the city (Aladdin-Tepe) finds were made that are similar to the Phrygian handicrafts . The area was temporarily assigned to the Roman province of Galatia or to the east bordering Cappadocia or the southern regions of Pisidia and Pamphylia in AD 25 . After the Roman emperor Claudius had settled veterans here, the city was sometimes also called Claudiconium. The city is considered the birthplace of Saint Thekla and is mentioned in connection with Paul in the Bible ( Acts 14.1-5  EU ) and ( Acts 14.21  EU ).

In the 11th / 12th In the 19th century the Seljuks conquered the region and the Rum Seljuks founded an independent sultanate in Anatolia , the flourishing capital of which had been Iconium since Kılıç Arslan I. The Rum Seljuks brought a boom in trade. Russian furs , cobalt , silk , cotton , slaves and horses for precious stones, gold and silver; Grain, cloth and weapons from the West against spices, sugar, musk and aloe juice from Egypt and Mesopotamia. The city received a city wall with 108 towers, which was torn down in the course of the 19th century.

During the Third Crusade , Friedrich Barbarossa fought the Battle of Iconium here in 1190 .

After the fall of the Rum Seljuks in 1307, the Karamanids ruled Konya. In 1442 the Ottomans under Murad II defeated the Karamanids and Konya remained part of the Ottoman Empire until the end of the First World War . On December 21, 1832 Ibrahim Pasha defeated the Ottoman Grand Vizier here . This secured the rule of his father, the viceroy of Egypt Muhammad Ali Pasha , over Syria for the time being. Konya has been part of Turkey since 1923.

Konya was an important religious center during the Ottoman period. After the banning of Sufi orders by Ataturk therefore it developed into a stronghold of conservative Islamic opposition. The proportion of votes held by Islamic parties is always among the highest in the country. In the Roman Catholic Church it forms a titular archbishopric .

On June 15, 1987 Konya was converted into a large city municipality ( Büyükşehir ) by the decision of the Council of Ministers . With Law No. 3399, the central district (Ilce Merkez) was dissolved and divided into three approximately equal districts: Karatay in the west, Meram in the south and Selçuklu in the north. In 1990 a small part, the Derbent district to the west, was separated from the latter . 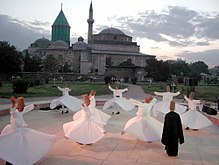 The symbol of the city is the mausoleum of Mevlânâ Jalal ad-Din Rumi , the founder of the Mevlevi order , today a museum and place of pilgrimage for devout Muslims and followers of Sufism . In addition, there are significant architectural monuments from the Seljuk era in Konya.

The Selçuklu Kulesi , the “ Selçuklu Tower”, named after its location in the Selçuklu district, completed in 2006 , is the tallest building in Central Anatolia and the eleventh-tallest high-rise in Turkey at 163 meters. It has 42 floors, the two upper floors rotate on their own axis.

Since 1992 Konya has a two lines existing tram network in standard gauge , which initially with from Cologne acquired used railcars operated. By 2015, it was modernized with 60 new Škoda trams with a design specially designed for Konya. A further 12 battery-operated vehicles were purchased for sections of the route that do not have overhead lines.

The former Pt wagons of the Frankfurt am Main tram, converted for the light rail in Gaziantep in a locomotive and wagon factory in Eskişehir , are also being tested on the Konya tram network . A trial run could not be carried out in Eskişehir or Gaziantep due to the lack of suitable infrastructure .

In 2011 the Ankara – Konya high-speed line was opened. Since then, the approximately 300 kilometers have been covered in 90 minutes. The high-speed train to Istanbul - Pendik takes four and a half hours.

Konya is still not connected to the Turkish motorway network. There are numerous companies along the D-715 in the direction of Ankara.

Konya is the destination of around two million mostly Turkish tourists who especially want to see the mausoleum. About 40 kilometers southeast of Konya is Çatalhöyük , one of the oldest human settlements. Ak Manastir , the ancient city ​​of Kilistra , Kara Höyük and Hadim Selale waterfall are in the vicinity .

Konya has had a partnership with Xi'an , People's Republic of China , since 1996 .

The Selçuk University Library and Archives

The Hacı Veyiszade Mosque is particularly worth seeing. Museums worth visiting include the Karatay Museum, Archeology Museum, Ethnographic Museum and Ataturk Museum. There are also the Sırçalı Medrese , the Ince Minare Medrese , the Kubudabad Palace and the Aladin Hill (Alahaddin Tepesi) .

The dancing dervishes of the Mevlevis , which are still organized in several groups and have now become a tourist attraction, are also well known. Since 1954, the Mevlevi dance must Sema be performed again in a sports hall on the occasion of the anniversary of Jalal ad-Din Rumi's death on 17 December after the September 2, 1925 Ataturk, the founder of the Turkish Republic, such religious activities by resolution of the Great National Assembly of Turkey had banned.

Sille , a former village 8 km northwest of the center, is a new starting point for cultural and religious trips in Konya with its restored mosques and churches, cave churches, catacombs and traditional houses.

Konya is the seat of the local broadcaster Kon-tv .

The Selçuk Üniversitesi in Konya consists of 16 faculties, a foreign language college, a state conservatory, three health colleges, 25 vocational colleges, four institutes, two sports colleges and 13 research and development centers. With more than 85,000 students, it is the largest university in Turkey in terms of numbers.

Boroughs of the city municipality (Büyükşehir Belediyesi) Konya, the same counties of the province of Konya are