The title of this article is ambiguous. Further meanings are listed under Locomotive (disambiguation) . 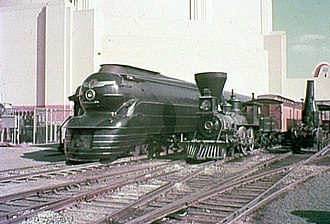 A locomotive (from neulat.loco motivus , moving from the spot), also called a tractor or locomotive for short , has been used since its invention to refer to both a track or rail-bound and a freely movable work machine, which after the period of exclusive use has been further developed as a versatile steam locomotive to a predominantly track-bound traction vehicle with different drive technologies.

Differentiation according to the type of drive

Steam locomotives get their primary energy from the combustion of the fuels they mostly carry with them , previously often peat or wood , then coal (all on an open grate), as well as coal dust or heavy oil . They are a further development of the steam engine . The fuel required for the drive are in cargo spaces (carbon boxes) or tanks on the locomotive or on an attached Schlepptender carried.

The steam locomotive boiler heated in this way generates the steam pressure for the cylinders from water that is also carried in water boxes on the locomotive or in the attached tender . These transmit the compressive force to the drive rods , which are connected to the drive axle via a drive crank .

The steam locomotive was the original and long prevailing type of locomotive. It has been almost completely replaced by electric and diesel locomotives in the USA since the 1960s, in Switzerland since 1960, in the Federal Republic of Germany with the Deutsche Bundesbahn since 1977 and in the GDR and in Berlin with the Deutsche Reichsbahn since 1988. In Asia, for example in the People's Republic of China , India , Thailand and North Korea , but also on some German narrow-gauge railways , steam locomotives are still in regular service.

Locomotives with gasoline engines and other forms of combustion engines are only of historical importance . The gas turbine drive has not found widespread use either, despite numerous experiments and occasional use in operations.

→ Main article : Electric locomotive  and history of the electric drive of rail vehicles

With the help of an “energy tender ”, a joint development by the German Aerospace Center (DLR) and Deutsche Bahn , trains can also use non- electrified sections of the route without re-spanning .

The discontinuous storage of electrical energy in accumulators is also common. Locomotives with electric traction motors that get their power from a generator driven by a diesel engine are commonly classified as diesel locomotives.

Modern electric locomotives only have single-axle drives . The wheel sets together with the traction motor are usually combined in paired bogies with two or three wheel sets each, which support the superstructure.

Last stage of development are three-phase drives , consisting of the alternating or direct current of the catenary or the generator with diesel-electric drives in frequency the phase current to drive the three-phase traction motors win. With this technology, multi-system locomotives can run at different overhead line voltages and frequencies.

Differentiation according to application purposes

In addition to the type of drive, earlier types of locomotives were also divided into express, passenger and freight locomotives, as well as shifter and small locomotives. However, general-purpose locomotives that can pull both fast passenger trains and freight trains are increasingly being used for line operations . In passenger trains, multiple units are increasingly replacing trains with locomotives. A distinction between new and highly standardized locomotives according to their operating mode can only be found in the respective extreme areas, i.e. at very high speeds of over 200 km / h or very high train loads. A relativizing role in these assignments is also played by the fact that the old and still operational locomotive stock is often still used for train services with lower power requirements.

Compressed air locomotive at the German Mining Museum in Bochum