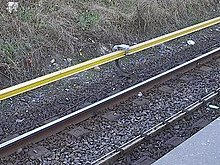 Single-pole busbar of the Amsterdam Metro , you can see the yellow, electrically insulating cover that protects against rain and contact from above.

Trams and light rail vehicles are usually supplied with electricity via an overhead line. For aesthetic reasons previously and again today - especially in inner cities - and between the rails laid Headed used for. B. on the Bordeaux tram .

Trolleybuses use overhead lines, which consist of an overhead contact line with two contact wires laid over the lane . Individual railways such as the Jungfrau Railway also use overhead lines with two contact wires, for example to enable a three-pole power supply for three-phase motors with the rails as the third pole ; In mainline railways , this principle has not proven itself due to the overly complicated contact wire arrangements in the area of railway switches . In order to guarantee a complete traction current supply in turnouts, it is necessary under two-pole three-phase contact lines to bridge the interruptions on turnouts with two pairs of pantographs (front and rear on the locomotive). Adequate safety distances must be maintained for overhead lines that are operated with high voltage . See overhead line: Safety, Accidents .

Completely independently run subways in large cities (in Germany in Berlin , Hamburg , Munich and Nuremberg ) have a laterally arranged power rail for reasons of clearance profile , which must be interrupted at switches and crossings . The oldest system in Germany, the small-profile subway in Berlin (lines U1 to U4), uses busbars that are coated from above, while the other systems use busbars that are coated from below. Such also uses the S-Bahn Berlin , the S-Bahn Hamburg contrast side coated has busbars. The London Underground uses both a side track and a track in the middle of the track, both of which are painted from above.

In Switzerland the term catenary is used instead of the term overhead line . The Deutsche Reichsbahn did the same during its entire existence.