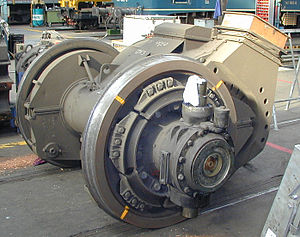 Driving wheel set with drive motor. The rubber segment springs can be seen on the outside, which elastically connect the wheel body to the motor transmission. The duct connection at the top right serves to supply cooling air.

In rail vehicles, the single-axle drive is the drive with separate motors on each drive axle .

Simple single-axle drives were already used in the first electrically operated vehicles , often with only one driven wheel set. In the case of electric locomotives with more than two driven axles, powerful large motor drives were initially installed, which acted on jointly coupled drive axles via crankshafts . When it became apparent that the imbalances in the boom could no longer be controlled with increasing size and speed, the return to single-axle drive also took place in large locomotives.

A single-axle drive for electric locomotives that is suitable for high outputs and speeds was developed by Jakob Buchli ( Buchli-Antrieb ) at Brown Boveri & Cie (BBC) in Switzerland around 1918 . The drive was first tested in 1919 on the Swiss test locomotive Fb 2/5 and used on the Ae 3/6 I from 1920 .
The Deutsche Reichsbahn introduced this drive in 1927 with the E 16 series . Other drives were tested with the E 18 and E 21 series .

The problem with single-axle drives is the mutual cushioning of the jerky movements of the powerful motor when switching on and changing gear levels and, on the other hand, the shocks that occur on the individual wheel due to uneven road surfaces.

It is advantageous that if a drive fails, the vehicle remains operational (reduced). The disadvantage is the lower efficiency due to smaller units and larger air gaps between rotor and stator (due to the shocks).

With single drives, it is unpleasant to relieve the load on individual axles due to the torque that the tensile force in connection with the wheel circumferential force exerts on the locomotive frame and which results in the entire chassis tipping over in the direction of travel. If the motor current and, accordingly, the torque for all motors are allowed to increase evenly, the rail friction of the most relieved, foremost drive axle that is the first to spin is decisive for its maximum limit .

With today's technology, however, the single-axle drive can be controlled electronically in a targeted manner, both during acceleration and during electromotive braking . The differences in the slip of the axles are compared and regulated . This means that four-axle locomotives with a single-axle drive can achieve the pulling power of conventional six-axle locomotives .

Depending on the design of the drives, greater wear-related differences in the wheel diameter of the axles are permissible than with mechanically coupled axles.

The single axle drive is also used in diesel-electric traction vehicles. The single-axle drive has been used very rarely in steam locomotives (using a steam engine ).