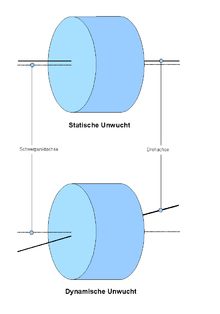 One speaks of an imbalance in the case of a rotating body whose axis of rotation does not correspond to one of its main axes of inertia . Imbalances lead to vibrations and increased wear , which is why they are balanced by counterweights . Typical examples of this are motor vehicle wheels, the cause of which is usually the tires, or the unbalance effects at high spin speeds of washing machines that were not correctly set up using cross spirit levels .

On the other hand, imbalances are often intentionally used for technical purposes.

A distinction is made between static and dynamic imbalance. Usually both forms occur at the same time.

with unbalanced mass u and distance r from the axis of rotation. For balancing, a different mass can be used depending on the selected radius. The balance quality (also quality Q) is

An imbalance is often specified in units of mm • g , and a balance quality in mm / s .

Example : If only one reflector is attached to a bicycle wheel, the side with the reflector always turns downwards. The wheel vibrates when driving fast.

Dynamic imbalances only occur during operation. They express themselves in a bending moment, the so-called unbalance moment on the axis of rotation. At the ends of the axis they cause circular vibrations shifted by 180 degrees. The center of gravity of the rotating body remains at rest, while the axis wobbles due to the opposing circular movements.

The dynamic imbalance is caused, for example, in unprofessional balancing by two offset imbalances: and in the center distance . As a result, a force acts in each case and these cause a torque perpendicular to the axis of rotation of the rotation, which rotates with this axis of rotation.

The moment of deviation in SI units m²kg results from

One takes this form of unbalance z. B. with car wheels often true as "flutter". They are therefore dynamically balanced, which can mean that both sides (inside and outside) of the rim carry counterweights.

Use of unbalance effects

Imbalances are not only a negative effect, they are also consciously used in technology in many areas. So z. B. container and silo walls cleaned with vibrators , materials compacted and driven by vibratory vibratory motors that convey or sort bulk goods. In mills are Plansichter added imbalances in vibration. Massage devices and the vibration alarms of cell phones also work with an imbalance set in rotation by a small motor. The unbalance bore is used to guide drills through stony to loamy sediment and thus to examine deeper layers of the earth. The pile (sheet piling, steel girders) is driven into the ground with a vibratory hammer. In the vibrating plate (construction machine), too , the compaction effect is based on imbalance forces.

The critical speed is the speed at which the forces of the rotating imbalance cause a machine part or the entire machine to vibrate in resonance. The resonating system is a spring-mass system; there is z. B. from the rotor and shaft of an electric motor / turbine or from the entire motor and its foundation or its suspension.

In the case of vibratory conveyors and vibrators , on the other hand, the resonance frequency of the vibratory system is intentionally set in the range of the critical speed or vice versa.