The title of this article is ambiguous. Further meanings are listed under Lance (disambiguation) .

A lance is a polearm designed as a stabbing weapon that normally has a point. Nowadays it is understood to mean skewers used by the cavalry . The total length is usually around three and a half meters, but special types of lance can reach a length of up to eight meters. The shaft is made of wood or, more recently, mostly of tubular steel.

11th century Norman horsemen wielding their lances over their heads

The term is derived from the Latin word lancea , which was used for the light throwing spear of the Roman auxiliary troops ( auxiliares ). Due to a change in meaning over time, the use of the term is not uniform. From the 15th century the term was used for heavy spears, which the cavalry used as stabbing weapons. Since then, the term has also been used to refer to spears or spears carried by foot troops as stabbing weapons , as they were wielded by the infantry in antiquity (e.g. by hoplites or Roman legionaries), as lance. In translations of classical texts, the term “lance” is usually used instead of “spear” or “pike” when speaking of spears as a stabbing weapon for foot fighters or hunters.

Lance as a symbol

In the myth , the lances that the heroes wield are sometimes given a special meaning: Achilles has a lance that already belonged to his father Peleus and that, apart from Achilles, none of the heroes fighting before Troy can wield it ( Ilias XVI, 140ff .; XIX , 387ff.). 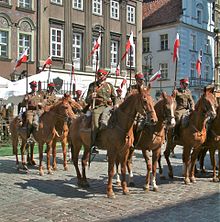 Polish Uhlans in 1939 uniforms with lances

The spear is considered to be one of the oldest weapons in human history and was developed as early as the Middle Paleolithic , then led as a further development to the spear as a long-range weapon, which is also several hundred thousand years old ( Schöninger spears possibly up to 400,000 years old). With the domestication of the horse from around 3000 BC. BC humans could use the spit on horseback.

In late antiquity , particularly long rider lances, the so-called Contus lances, were sometimes used, which were carried with both hands.

After the Europeans had taken over the technique of the stirrup from the Avars in the early Middle Ages , the rider's lance finally became the main weapon of the heavy cavalry in mounted combat, from the knight army of Charlemagne to the hussars and the cuirassiers , which only lasted during the First World War ended.

Until the early Middle Ages, the lance was not placed under the arm, which is necessary to transfer the full force of the horse to the weapon, but swung over the head. It is not entirely clear when the lance was inserted. It is believed that this became common in the late 11th century. The technique of inlay probably required the use of stirrups.

The light cavalry (e.g. Chevauleger ) was usually only armed with a carbine and a saber, but around 1890 also got lances. At that time these were 3.15 m long, weighed only two to three kilograms and were made of steel tubing.

During a closed cavalry attack, the saber (on the left) served to ward off the enemy lance. The lance was used until the 20th century. In the German Reichswehr (see illustration above) the lance was not abolished until 1927, while in the British Army it is only used for parade purposes.