Depiction of a joust in the Codex Manesse (around 1300) 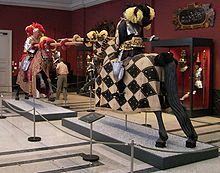 Tournament armor from the Dresden armory (16th to 17th centuries)

The (also: the) Tjost (also: the jousting , the jousting or jousting ) is a gallant battle game with the lance to horse . Two knights in full armor and with blunt or otherwise prepared lances ( called racing spikes ) ride towards each other on the right and left of a barrier ( tilt ) in order to knock the opponent off the horse with a targeted lance thrust or at least hit the shield or helmet of the Opponent to land.

Jousting began in the High Middle Ages as knightly combat training. It has been popular as a show for the people and the nobility as part of the medieval knight tournaments since the 12th century. The word joust is a borrowing from Old French Joster and appears in the romances of the Middle Ages, the first time in the late 12th century ( Erec ). The joust is described extensively and repeatedly in Wolfram von Eschenbach's novel Parzival . In the 15th century the word largely disappears; the jousts of the 16th century were called jump-off and race at the time. For each of the two disciplines there was special armor, or special armor parts, the piercing and racing gear .

The joust was considered the supreme discipline of the tournament . The winner of a joust received his equipment from the loser, i.e. weapons, armor and horse. For this reason, the participants in the Tjoste were able to achieve high losses and equally high profits. As a result, there were knights who traveled from tournament to tournament, earned a living by successfully participating in tjosten and thus came to a certain degree of wealth.

By the 15th century at the latest, jousting was no longer relevant as a military training and therefore developed further as a sport. Especially under Emperor Maximilian I (nickname: “The Last Knight”), a real “jousting industry” arose from the 1490s with competitions under various rules and with different, specially designed equipment. Paulus Hector Mair compiled a list of more than a dozen different types of Tjost in the 1540s.

These competitions were fostered throughout the 16th century, and finally by the middle class since the “journeyman jump-off” in Nuremberg (1561). Likewise in England, where annual Accession Day tilts were carried out in honor of Queen Elizabeth I. In contrast, the joust was banned in France after King Henry II was killed in an accident in 1559 . After the end of the 16th century, the Tjost quickly died out. A late event took place at the wedding ceremony of King Charles I of England in 1625.

Due to the risk of injury despite blunt weapons and special tournament armor , tjosten was temporarily forbidden by various princes and also by the Pope . Instead, other forms of lancing were developed, so competitions in ring riding were common up to the Rococo . Forms of ring piercing can be found today at many medieval festivals , for example the Quintana in Ascoli Piceno , and in equestrian sports in forms of ring riding.

In the early days of jousting, fighting with few rules and sometimes to death ("à l'Outrance"), the jousting became increasingly restricted and bloodless. In England the Statutum Armorum was issued in about 1292 , according to which no sharp weapons were permitted and swords without points and lances had to be blunt. Likewise, a fallen enemy was not allowed to continue attacking and he had to be given the opportunity to have his squires help him up. Violators were punished with loss of horse and weapons as well as three years imprisonment and trial before the royal court of honor. Although in some tournaments the lances were provided with predetermined breaking points, the dismounting with the further fight on foot was stopped and only the victory on points was aimed at, there were still frequent injuries and also some deaths. Thus died Henry II. Of France by a lance splinters during a Tjostes.

In a popular variant, a knight had to score three points to win. A hit on the shield and helmet gave one point. If you knocked your opponent off your horse, you got two points. The death of the opponent gave three points and thus the victory, even if a fatal outcome of the joust was not intended. If the enemy was not hit or unsaddled, there were no points. The joust was repeated until the required number of points was achieved. If at the end of the tournament there was still a tie, the last one to put his visor up wins. Since the tournaments were usually held in summer, this was a real challenge with sunshine and black armor, which some knights had to atone for with heat stroke .

In the 16th century, the Hungarian nobleman Gregor Baci suffered a serious head injury from a tournament lance that pierced his head through his right eye. He is said to have survived this injury for another year.

Jousting as a sport