Reconstruction of a Greek hoplite 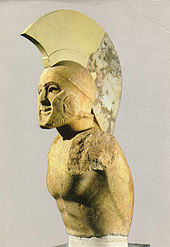 Marble statue of a hoplite. Sparta, 5th century BC Chr.

A hoplite ( ancient Greek ὁπλίτης hoplítēs “heavily armed”, from ὅπλον hóplon , here “war equipment , armor , shield ”) was a member of the main force of the Greek armies of the archaic and classical times. In addition, other genres such as gymnasts , slingers , archers , peltasts and riders ( hippeis ) played at least since the transition from the 5th to the 4th century BC. An important role.

Hoplites were generally citizen soldiers, i.e. free men who paid for their equipment from their private assets and served their respective polis in the event of war. Unlike in many other countries, the main burden of the fighting was borne by “ordinary” citizens and not by aristocratic warriors. A hoplite was thus a name for a citizen who could at least partially afford such equipment, and less a description of a type of weapon (with the expected overlap of the two definitions).

The hoplites fought in a closed formation, the phalanx . If one side was put to flight, the battle was usually decided because many fighters threw away their heavy shields while fleeing. Another fight without the shield was not possible. (Hence the saying: "Come back with (victorious) or on your shield (dead).") The battles became more dogged as a result, but were probably also shorter and mostly decided unequivocally. The duration of a hoplite battle is not known for sure. Ancient sources often speak of a long duration, but by no means took up a whole day.

The armament of the hoplites was called panoply ( πανοπλία panoplía ). Pan [h] oplie means “full armor” (literally: “all armament”: pan “all”, hoplon “weapon”), more freely translated “heavy armament”. The most important protective weapon was the large, round shield ( ἀσπίς aspís ), which could cover the entire upper body. It was made of wood, was usually initially set with a bronze border, later covered with bronze sheet and measured about one meter in diameter. The attack weapons were a dory (thrusting lance) with a steel tip (the so-called Sauroter) (in the 7th and 6th centuries BC partly supplemented by a shorter throwing spear) and a sword in case the lance broke. The lance measured about two meters at the time of the Persian Wars, but also up to six meters in Hellenistic times, called Sarissa . Several models were used for the swords. In addition to a straight short sword also from the 4th century was heavy blow sword ( κοπίς kopis also μάχαιρα Machaira called) in use the blade of a lenticular had cross-section.

There were also armor parts such as the helmet (often decorated with an imposing comb bush) and greaves made of bronze as well as a breastplate  - the latter was originally a linen armor , which was later replaced by the better protective brass armor ( bell armor ). Additions such as upper and forearm splints as well as ankle, thigh and foot protection were mainly used until the 6th century BC. In use with richer fighters.

Since this equipment was expensive, only relatively wealthy citizens could afford it. The non-aristocratic hoplites also seem to have had simpler decorations, such as grave reliefs from the 5th and 4th centuries BC. Show. Helmet, breastplate and greaves made of bronze were occasionally replaced by lighter material or were left out completely.

The value of a hoplite armor can hardly be related to modern monetary or material assets, since too little information is available on the economic expenditure. It was customary to provide the shields with distinctive badges. In the literature, the shield coat of arms is taken up as a stylistic device (for example, impressively in Aeschylus ' Sieben gegen Thebes , vs. 375ff.). The Spartans, and later other cities or leagues, also had uniform shield signs that differed from polis to polis. The shields of the Athenian hoplites could, for example, be marked with an owl , with the Thebans it was a club and with the Spartans a Λ , the Greek letter lambda (for Lacedaemon , i.e. Laconians or Laconia ). Except for the shields, the other pieces of equipment (such as the breastplates) were not uniform, but rather individual.

Since Iphikrates , the spears have been lengthened and long, oval Thureos shields have been used.

Political significance in the Athens polis

The beginning of the direct political influence of the hoplites can be dated to the reform of Solon . In the form of government created by him, the timocracy , membership of the nobility was no longer the prerequisite for assuming political offices, but demonstrable wealth (see also witnesses ). Since, in principle, anyone could acquire enough wealth to be able to afford hoplite equipment, promotion to the politically active class was open to everyone.

In democratic times, when the status of a hoplite no longer restricted political participation “downwards”, the Athenians who had no property could get equipment in the city armory . Since each phyle provided its combat unit (500 BC approx. 1000 hoplites), each citizen had the choice whether he wanted to serve on a trireme or in the phalanx.