The title of this article is ambiguous. Further meanings are listed under Phalanx (disambiguation) . 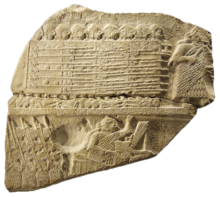 Sumerian phalanx around 2440 BC. Chr. (On the vulture stele)

The phalanx ( Gr. Φάλανξ phálanx for "tree trunk", "roller", "roller" or " battle line "; the plural of the word is phalanges ) is a tightly closed, linear combat formation of heavily armed infantry with several members . The term primarily refers to the battle formation common in ancient Greece , in which the hoplites formed a wall of shields, with the right side of each heavily armed man being covered by the neighbour's shield. Two dozen men were marched in trains, usually three side by side and eight men deep, with the spear slung over their right shoulder. Since the 16th century the term can also be found in translations of ancient writers and in specialist literature, and since the 18th century it has also been adopted from Latin to denote closed rows or fronts.

Possible origins of the phalanx

It is now widely assumed that the phalanx was already known in pre-Greek times and was used as a battle structure for the infantry. The dates to the year 2440 or 2430 BC. The vulture stele of King Enneatum from Lagasch , dated to the 3rd century BC, shows several fragments of tightly sealed fighters on foot, armed with shield and lance. Accordingly, the phalanx would have been developed and introduced in the Sumerian empires.

The phalanx in the times of Archaic and Classical Greece

Phalanx of the classical period, still with a short lance (modern drawing)

In ancient Greece, the phalanx initiated the transition from individual to formation battles. It was probably made by the Spartans in the 7th century BC. Introduced in BC and consisted of armored hoplites, which were armed with an originally about two meters long, later increasingly longer (up to 7 meters) lance . This lance was often also provided with a bronze tip at the lower end of the shaft. This was used to ram the lance into the ground in the event of an enemy cavalry attack. As a result, it offered greater resistance to the riders than if it was held by a soldier, and thus created an almost insurmountable obstacle. In addition, the rear tip could be used as a secondary weapon if the lance broke, or if the lance was still intact, it could be used to stab fallen opponents who were passed over in the forward movement. The phalanx was a closed linear formation made up of several limbs of hoplites.

Corinthian bronze helmet from the 5th century BC BC, typical Greek protective helmet in the phalanx

Originally, the phalanx was believed to be 8 open and 4 closed sections deep. Later the lineup was usually 7 to 12 men deep. One problem of the linear setup with armament and equipment typical of the phalanx was the endeavor of every phalangite to bring his unprotected right side into the protection of the shield of his right neighbor. As a result, the Greek-style phalanx had a clear tendency to pull to the right. The commonality of the Greek armies in these customs led to the fact that both phalanges rotated parallel counterclockwise during the battle. The right wing , more powerful because of its elitist occupation , usually triumphed against the opposing, correspondingly less powerful left wing of the opponent. In theory, it was therefore conceivable that both right wings would beat the opposite wing and thereby become free for the impact in the back or the deep flank of the opponent. That is why the army won the battle, and it was the first to win on its right wing. As soon as this was done, the opponent usually left the field willingly and did not let it go to extremes.

In clear recognition of these connections, the Theban general Pagondas modified his phalanx at the Battle of Delion (424 BC) so that he reinforced his right wing to a depth of 25 men. This should make it possible to advance so quickly to the right and to smash the left wing of the enemy that the enemy was not given the opportunity to achieve success on the other wing in a comparably short time. Fifty years later, Pagondas' compatriot Epaminondas expanded this tactical approach to a completely new kind of battle order, which went down in history as the crooked battle order and is one of the most important tactical developments. In the Battle of Leuktra , Epaminondas reversed the classic concept of the phalanx and placed his best fighters on the left rather than the right wing. He also strengthened this wing to a depth of 50 men. As a result, the elites of two armies clashed for the first time in the Battle of Leuktra. The extreme depth of its left wing should ensure a safe and quick victory over the enemy attack wing. At the same time he held back his exceptionally less powerful right wing and did not allow him to intervene in the battle, which is where the order of the battle got its name “crooked” (the armies did not collide parallel, but at an acute angle).

The next further development of the phalanx happened under the Macedonian King Philip II. The military successes of the Macedonians in the 4th century BC. Were founded among other things by their further development of the phalanx tactics. The Macedonian Phalangites only wore light armor , which greatly increased the Macedonian army. Most of the Macedonian infantry, the companions on foot , were equipped with a lance over five meters long, the sarissa . So that fallen opponents could not stand up again, the back rows of the Pezhetairen stabbed them with the also sharp, lower end of their sarissa as they advanced. After the death of Alexander in 323 BC The Diadoch Wars broke out in the 4th century BC , in which sarissas with a length of up to 7 meters were used.

For close combat, the phalangites were armed with a short sword. Since they were hardly trained in sword fighting and their strength lay in fighting with long weapons, they avoided close combat as much as possible. This was particularly evident at the Battle of Pydna , when the Macedonian phalanx was unable to maintain its cohesion adequately in the uneven terrain. The Roman soldiers, who specialized in hand-to-hand combat, pushed into the resulting gaps and destroyed the Macedonian phalanx. Escape from a phalanx was almost impossible.

Use of the phalanx in the Roman army

Similar to the Greeks at first, the Romans fought in numerous individual battles. Under Greek influence, in the course of the Servian army reform , the Roman army switched to fighting in a closed battle line. The phalanx (see also Classis ) of the Roman infantry was initially staggered according to the armor and armament of the soldiers, with the heavily armored fighters in the first rows and the lightly armored fighters in the last rows. Later the legionnaires were staggered according to experience, the most experienced ( Triarians ) as support to the rear (tactics).

In addition to this minor change, a fundamental defect in the phalanx was removed by the Romans. Around the year 400 BC They introduced the manipular phalanx (manipulative tactics), which was no longer as rigid and immobile as its Greek model. Although the Greeks had already left small gaps between their army departments ( Lochoi ), which could be quickly closed in the event of threatened enemy intrusions, the Romans now also used the previously only administrative unit of the Manipels tactically. The maniples stood roughly like a chessboard, but in such a way that the gaps in the front of the foremost maniples were too narrow for the ones behind them, but wider than in Greece. On the one hand, this reduced the right pulling of the entire phalanx. On the other hand, the front manipels were given freedom of movement, as they no longer had to fear knocks in the flank. As soon as a sufficiently large gap was created, a subsequent manipel immediately moved into it and closed the front again. The Romans had freed the phalanx from its rigidity and - as Delbrück put it - provided it with joints.

200 years later, the concept was further refined with the introduction of meeting tactics . In addition to immobility, other major problems of the Greek phalanx were their susceptibility to attacks from the flank and their extensive inability to pursue the defeated opponent. Both problems were solved by the meeting tactic. To put it simply, there were several manipular phalanges one behind the other, which on the one hand could support each other by closing gaps, but were also available for fighting in the flanks or as a reserve, for example for pursuit.

Another 100 years later the phalanx reached the end of its development with the cohort tactic . In the cohort as a tactical body , the Romans had an independent association while maintaining the previous developmental steps, which could form the phalanx with other cohorts, as well as being able to and used alone. In addition, the cohort was a sufficiently large military body for a variety of military tasks. The phalanx had thus become a complex organism that could be expanded or dismantled as required without losing its tactical value.

From the Migration Period to the late Middle Ages, the infantry disappeared from the battlefields, in the sense of ordered foot soldiers. Only the Swiss took up the idea of ​​the phalanx based on the Macedonian pattern. However, there are some serious differences between the phalanx itself or the Macedonian phalanx in particular and the Swiss heap of violence . The violence consisted of a mixture of different weapon carriers. Although the fighters marching outside had the long spear reminiscent of the Sarisse, there were fighters with handguns in between. Long-range weapon carriers (crossbowmen, arquebusiers, musketeers) later joined the gang of violence. This mixture of armaments did not exist in classic phalanges, archers and the like were never part of the phalanx. Another difference was that the violence was not made arbitrarily wide, but either had a balanced ratio of width to depth, or had more depth than width. For this purpose, several hordes of violence (mostly three) were shown in succession, which supported each other and also granted flank protection if this task could not be performed by the cavalry. In this respect, it is correct that these formations are not called the phalanx.

The linear tactics and column tactics that follow later also represent fundamentally different concepts than the phalanx, even if the columns are reminiscent of the Roman cohort tactics in places.