This article deals with knight armor, further meanings are listed under Harnisch (disambiguation) . 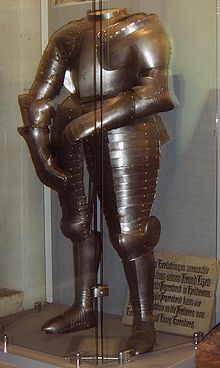 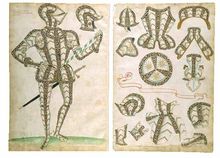 Harnisch in the 16th century 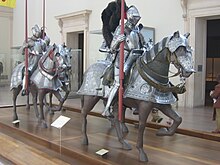 An armor ( mhd. Harnasch , from old French harnais ; originally probably from the old Norse * hernest "army supply") is the armor of a knight that covers the body . Horse harnesses and elephant harnesses were also made .

Originally, the name was applied to the entire equipment (full armor) of a knight. Around 1200 the meaning changed and the harnasch was only the part of the armor intended to protect the upper body.

In the High Middle Ages , the armor was also called “ Brünne ”, “Halsberc” or “Haubert” chain armor , which developed through various mixed forms into late medieval and early modern plate armor . Such armor was made by an armorer and then polished or etched by a harness sweeper.

Harnisch is a collective term for protective weapons within the group of armors that are used to cover the body. Subgroups of harnesses have developed in different time periods, cultures and usage-related. In particular, the following are known:

Examples of other prehistoric, ancient, medieval and early modern armaments:

Especially since the late Middle Ages , plate armor that was suitable for a specific use emerged, see: Types of plate armor .