Relief of a knight in armor and weapons

The earliest evidence so far is from the 4th century BC. Attested from Celtic graves.

The many small components of chain armor absorb most of the blows and shocks from weapons such as the sword and thus became the most common body armor in the High Middle Ages .

The term chain mail is of modern origin and is used today in popular scientific literature and colloquial . In scientific parlance one prefers the term ring mail shirt . The research of the 19th century made a distinction between mail mail and chain mail. If the metal rings are attached to a fabric or leather garment, research in the 19th century used the terms Brünne or chain mail . According to the current state of research, the existence of this special form is considered unlikely, as it has so far been hardly supported by archaeological finds - possibly due to the perishable sub-material . 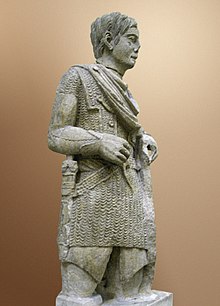 Antique illustration of a Celtic mail shirt. The unusual vertical banding of the ring braid is unusual

The exact origin of the armor is not known. However, due to the archaeological location, this is suspected to be in Central or Northern Europe. One of the earliest finds of ring armor is the moor find of the Hjortspringboat from the 4th century BC. BC in present-day Denmark. According to Allan Williams , the earliest evidence of a ring mail shirt comes from a Celtic grave in present-day Romania , which is dated around the same period. As a possible forerunner for this form of armor, this specialist author mentions a fragment of armor from a Celtic grave in Bohemia (probably 8th century BC), in which the iron rings were threaded onto cords like a net.

The Romans probably adopted this type of armor in the 3rd century BC. From their northern neighbors and used them under the name Lorica Hamata . With their shoulder pieces, the Loricae Hamatae were optically based on the Greek linothorax. In addition to numerous other types of armor, chain armor was used in late antiquity until the fall of the Western Roman Empire in the 5th century. In the Eastern Roman Empire it was still in use. The Roman chain armor was a wide chain mail that could reach the middle of the thigh and was provided with a doubled shoulder part.

The chain mail was also adopted in the Sassanid Empire .

The chain armor was mostly made from rings of iron wire. Finds suggest, however, that the Romans sometimes also used bronze rings. The rings were often riveted or welded together. As a special technique, the Romans used a network of alternately plaited and punched rings. 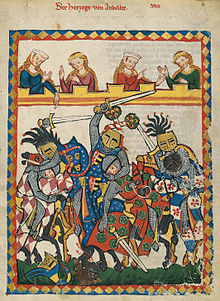 Tournament scene from the Codex Manesse . The Duke of Anhalt and his opponents in high medieval primary armor 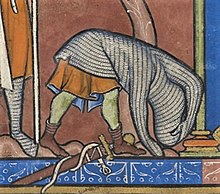 Skulls of fallen warriors with chain hoods from a mass grave who died in Waldemar Atterdag's invasion of Visby in 1361, Fornsalen Museum, Visby ( Gotland ) 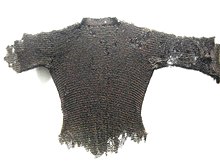 For a long time after the collapse of the Western Roman Empire , there was no significant arms industry on European soil (except in Byzantium ), which added to the value of chain armor. Chain armor was therefore less common in most of Europe in the early Middle Ages . At the time of the Great Migration , they are mainly known from the graves of high-ranking princes, for example from Planig and Gammertingen . In addition, the buckle helmets of this time were partly provided with a neck protection made of chain mesh. In addition to chain armor, various types of cheaper textile and leather armor , lamellar armor and scale armor existed in the early Middle Ages . The latter also offered better protection against force attacks, as it was a little more rigid, but overall it was inferior to chain mail. In contrast to the Roman chain armor, the chain armor of the Middle Ages covered ever larger parts of the body. In the 12th and 13th centuries, chain mail became an important form of armor for knights . In addition to chain mail, one wore chain gloves, a pot helmet and a helmet well .

A complete medieval chain armor, which protected a large part of the body, consisted of tens of thousands of steel rings that were riveted to one another to make it difficult for the rings to burst open, for example by arrows. It was therefore extremely time-consuming to manufacture such armor, which was also reflected in the price. Chain armor could cost as much as several dozen cattle, which is why initially only wealthy nobles - and sometimes clergy - could afford to purchase such armor. The manufacturers of chain armor were called Panzermacher or Sarwürker / Sarworter in the Holy Roman Empire . The tank makers were bound by a guild . The Holy Roman Empire in particular was a stronghold of this craft in Europe.

Chain armor offered very good protection against direct injuries from blows and stabs, as it was hardly possible to penetrate the armor. Due to the flexibility of the armor, however, it offered little protection against the force of an attack. That is why there is, for the first time, reliable evidence from the High Middle Ages that padded textile armor, known as gambeson , was worn under or over chain armor . This increased the protection that chain armor offered from cutting and stabbing weapons, and more of the force was absorbed. According to historical sources, the combination of gambeson and chain mail even protected against arrows from longbows , stabbing attacks and lance attacks by charging cavalrymen.

The disadvantage of chain armor was the fact that a large part of its weight was on the wearer's shoulders. This fact was offset by wrapping a belt around the waist so that some weight was transferred to the pelvic area. In addition, in conjunction with a gambeson, it offered little protection against battle ax blows , maces and crossbow bolts .

From the middle of the 13th century, chain armor was gradually reinforced with metal plates or replaced ( transition armor ). This development was completed around the year 1400 and resulted in the plate armor . It can be explained by a variety of sociological, economic and scientific changes. In fact, it was only through new developments (blast furnaces and the use of water power for forging ) and the expansion of cities that the formation of specialized armatures became possible in the first place. The new armor was much cheaper: In the 15th century, plate armor was cheaper than chain mail, because chain mail took several months to manufacture, whereas a breastplate only took two days. In addition, infantry became more and more important in warfare, just like professional soldiers and mercenaries (for example the mercenaries and Swiss rice paddlers ). Even heavy cavalry like the French gendarmes were no longer exclusively nobles. So they were looking for ways to equip many fighters cheaply.

Since plate armor had to be as flexible as possible, certain parts of the body such as the armpits and the genital area remained unprotected. Therefore, for a long time after the appearance of plate armor, chain mail was worn under the armor, or at least the gaps that the plate armor left were protected with chain mesh or floating discs . With simple infantry it was z. B. customary during the 16th century to use a neck and neck protection made of chain mesh - the so-called bishop's collar . At the beginning of the 16th century, genital protection for plate armor - the so-called brayette - appeared, but this could not be worn on the back of a horse, which is why chain mesh was sometimes still used in this sensitive area. In fencing matches , too, it happened for a long time that chain mail was worn under clothing. Almost completely preserved early and high medieval chain mail are only preserved in very small numbers up to the present day (mail shirt of St. Wenceslas, Prague , St. Vitus Cathedral , around 900/10). Most of the specimens in the museums and collections date from the late Middle Ages or the early modern period, or were only made in the 19th century, often in excellent craftsmanship.

For chain mail from the European area, the work steps are roughly as follows:

A single chain mail was the equivalent of several cattle. A shirt was sometimes worked on for up to a year.

The average weight of a simple chain mail with short arms is around 15 kilograms.

With the disappearance of plate armor in the second half of the 17th century, chain armor also came to an end. In other cultures, however, chain armor was still used in some cases well into the 19th century, especially in the Orient. During the First World War, various forms of armor were again experimented with, including pieces of chain armor. British tank crews, for example, wore face shields made of chains to protect against metal fragments from the fire. During the Second World War, chain mesh was also used again by American bomber crews to protect against fragments from flak shells. In the search for better protective equipment for the police and army, various manufacturers are currently experimenting again with varieties of chain armor in combination with modern synthetic fibers. Some police units like the SEK Munich use chain mail to be able to overpower knife stabbers with less risk.

Today, chain armor in the non-military sector is often used in live action role playing or re-enactment . The scene is large in some Western countries and produced numerous knotting techniques (such as dragonscale or Japanese and Persian patterns), including some especially for jewelry made from chain rings - such as necklaces, ties or bras.

Stainless steel chainmail is used by compressed air divers who work in waters where sharks are found. These chain suits - called "shark suit" in English - are worn over the diving suit.

Even with certain work, e.g. B. in the butcher's or butcher's trade, z. B. Chain gloves and aprons worn to protect against knife cuts. However, these are often produced in a fundamentally different process.

The “chain mail” was revived in Mainz in the 1980s as protective equipment for the upper body in academic fencing with sharp weapons, the so-called mensur . Until then, the upper body was protected from blows that were too deep by protective equipment made of reinforced leather, the plastron . These plastrons were very thick and stiff. When the fencing arm moved to the other side of the body ("pushing forward"), the material jammed and hindered the movement. Since the new solution increases the fencer's freedom of movement, it quickly found widespread use in student fencing and is now common everywhere. A Kevlar vest is usually worn under the chain guard to protect against accidental stinging .

Rust is hardly a problem for chain armor if it is worn regularly and carefully stored. According to the experimental archaeologist Marcus Junkelmann , who gained a lot of experience with replicas of Roman chain armor, the rings rub against each other incessantly when the wearer moves and thus rub off the rust. With constant wear, oiling is not even necessary, even in wet weather and even when used in water. Only an intense black iron abrasion can be determined. If stored improperly, an unused tank can quickly rust together into a single lump, various examples have been obtained from archaeological finds.