This article explains the historical re-enactment proposed by Robin George Collingwood in his Theory of Historiography . Re-enactment as a technique in documentary films or as a therapeutic option in psychiatry or psychology are not shown here. 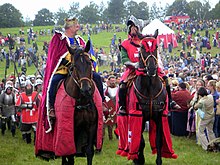 One of the largest re-enactment events in Europe: The Battle of Tannenberg (Poland)

Reenactment of the Battle of Naseby

Play media file
Reenactment of the siege of the city of Emden in 1623.

Reenactment ( English for 're-performance', 'reenactment') is the staging of concrete historical events in the most authentic way possible. Similar across the path of the updated reliving a Living History should history be made exciting way comprehensible and understandable. The reenactment of historical or legendary events was already common in antiquity .

According to the so-called theory of historiography by the British philosopher and historian Robin George Collingwood , the central part of which deals with historical re-enactment , the task of re-enactment is to reconstruct a very concrete historical event as authentically as possible on the basis of the traditional sources . In doing so, the thoughts and intentions of the originally acting actors should be replayed, as they were expressed in the past event. This scientific approach is central to the definition of modern reenactment.

In the English-speaking world, re-enactment was often reduced to the military-historical accurate reenactment of battles or perceived as such by the public. In fact, the term reenactment also includes civil historical stagings that can be traced back to historically verifiable individual events.

In addition to countless clubs that re-enact authentic historical events in their free time, commercial re-enactment groups have also formed that perform in front of an audience on various occasions. The classic Collingwood re-enactment is not primarily carried out, but mostly living history is presented in a more comprehensive sense, which allows improvisation to a greater extent and is less strictly bound to the concrete historical event. In the public perception, but also in many groups, the boundaries of these historical interpretations are blurred, which is due to the fact that the representation can often lead to overlapping.

People who deal with reenactment are colloquially referred to in the scene as reenactors .

Conceptual problems, overlaps with other interpretations 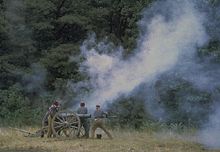 Reenactment of the Battle of Petersburg , USA

Episode from the Battle of Sanok -Olchowce near the Molotov Line . Sanok, June 22, 2008 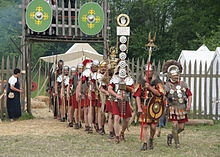 In the public debate, the various terms of “playing with the past” are often confused. While some publications on the subject of leisure events shorten the reenactment to the representation of battles, in educational writings reenactment, LARP and Reenlarpment become subsections of the living history.

Experimental archeology can also be related to re-enactment . Many historians see both working methods as a possible platform for collecting historical experience and carrying out valuable experiments. Both forms have already worked hand in hand in the past, or at least exchanged them.

In contrast to time and place-bound reenactment, which attaches great importance to scientific authenticity, Live Action Role Playing (LARP), which is based entirely on the area of ​​fun and games , tends to approach the histotainment with which Re-enactment should not be confused either. In many media and publications, histotainment and reenactment are often blurred or are even used as synonyms. Reenactment can, however, also become part of a histotainment if serious historical documentations value it. In addition to the word histotainment, synonyms such as edutainment and - especially for documentaries - docutainment have been formed.

Even with LARP, a form of fantasy role-playing game, it is of subordinate importance to reproduce actual historical events or to act with actual, historically proven equipment. Nevertheless, the made-up word Reenlarpment has emerged for this very free form of historical interpretation . This can sometimes lead to confusion.

Battle Display is often confused with re-enactment. This involves collecting military items in connection with a photographic or film staging. The main focus here is on modern, often up-to-date military units, which are mostly reconstructed by individuals using photos. The origin of this hobby lies in the Asian region, a result of the popular collecting and modification of 1: 6 miniatures there.

Since the Historikertag 2002, on which the game scenes in the historical documentaries of the television journalist Guido Knopp were examined, histotainment has been the unscientific and dubious representation of alleged historical facts. This also includes computer games, supposed medieval markets , theme parks or reality soaps, in which applicants can gain supposedly authentic experiences with the past through “role-playing in historical settings”. Critics of histotainment see the particular danger in the fact that an unbiased audience is unable to differentiate between fiction and reality. History, which lies in the hands of producers or directors, becomes a mixture of “found and invented” that can be shaped according to the specifications of those responsible. This would create false images of history in people's minds, which in the worst case could correspond to a fashionable, intellectual or political prevailing zeitgeist.

Since the Roman Empire, more or less correct historical representations have been re-enacted on a wide variety of occasions . The passion plays about the suffering and death of Jesus Christ , which have been widespread since the Middle Ages, play a special role in this context . At the time of Kaiser Wilhelm II , the most varied historical depictions and historical parades were particularly fashionable. Mostly personalities and events in German history should be remembered. Most of the time, a romanticizing picture of the depicted epoch was drawn. From this time, the Landshut Wedding , which has been held since 1903 with around 2,000 participants, has survived , at which the Bavarian city of Landshut and its residents celebrate the wedding between the Polish king's daughter Hedwig and Landshut's son Georg , which was concluded in 1475 .

The roots of today's re-enactment scene , which has formed since the 1970s, lie in German-speaking countries , primarily in England, but were also promoted by American soldiers in Germany. The Wallenstein Festival , which has been held since 1980 , at which the commander-in-chief of the imperial armed forces in the Thirty Years' War , Albrecht Wenzel Eusebius von Waldstein (Wallenstein), was re-enacted in Memmingen in 1630 , is probably the largest regular "reenactment" with around 4,500 participants " of the world.

Today clear national and culture-specific differences can be observed in the reconstruction of battles. In the USA and Great Britain, for example, historians as well as representatives of culture and tourism often use animation methods and costumed actors in order to make historical events vivid for an audience alienated from national history. As a concept of military tourism, re-enactment is therefore less controversial in Anglo-American countries than, for example, in Germany, as re-enactment often involves walking a tightrope between dubious spectacle and the scientific conveyance of history. More recently, in America, especially in Pittsburgh and Chicago, groups from the independent theater scene have also approached the form of re-enactment in a critical way, whereby the focus here is not on military events, but on those from the labor and protest movement.

Many specialist historians see re-enactment on the one hand as a sincere effort in the reconstruction of individual artifacts and a possible platform for imparting historical knowledge and, if necessary, for gaining new knowledge for science. On the other hand, they recognize “slapstick” and “fantasy” because, for example, when depicting medieval events, they often fall back on “old concepts from the 19th century” and, with the lack of science, there is no historical depth. Therefore, a distinction is often made between a scientific presentation through experimental archeology and museology and an entertainment re-enactment.

Since, especially in Canada and the USA, a large number of viewers at live events in the past criticized an all too authentic handling of history and many historical facts and events could not be conveyed or sometimes came up against ethical and legal barriers, often had to Compromises are made in a realistic representation. In addition, the immersion into historical events, which is so important for the re-enactment, was made more difficult by explanations that were sometimes necessary. In order not to be exposed to professional criticism for making icing history , some reenactment groups have therefore in the past clearly distanced themselves from public appearances in order to minimize the degree of restrictions.

For some time now, some groups that have taken up the subject of the Waffen-SS have been trying to incorporate ideologically one-sided currents into the re-enactment area. SS misdeeds are played down or denied. As a countermeasure, serious groups and associations have therefore signed agreements that expressly distance themselves from National Socialist ideas, their sponsors and groups who embrace the SS issue. The WWII Living History Agreement 2007 is an example and a consequence of these experiences.

In the past, in the early Middle Ages re-enactment scene, due to the use of swastika symbols in some groups representing Germanic tribes, a discussion that has expanded to the fundamental question of the scientific nature of the approach. In this area of ​​re-enactment, too, a declaration was signed by many groups and individuals, with which they want to distance themselves from extreme currents.